Julia Spencer Fleming’s books were not of interest to me. First, I am a romance reader. Second, the series is about a priest.   And a married cop.   I am not a fan of infidelity.   Keishon, however, kept suggesting them to me whenever I had a lull in my reading.   Amazing writer, says Keishon.   I resisted for a long time but then Macmillan gave away the first two stories in the JSF series. I downloaded and started reading.   And then bought the next one.   And the next one.   The unconsummated longing between Claire and Russ often had more sexual tension than the most explicit menage.   I was lost in the world of Millers Kill.

Even though JSF writes mysteries (with romance) I feel like she is part of our community.   She reads romances, comments on our blogs, and even participated in the Smart Bitches Book Club chat about the Kristan Higgins’ book, All I Ever Wanted (JSF is a fan).   I would not have given the Claire/Russ series a chance, though, had I not had the opportunity to have a no risk exposure to JSF’s writing.   In that vein, we are offering up 4 ARCs of One Was A Soldier signed by Ms. Spencer Fleming so that a few of you can have that same no risk experience.

Apparently Macmillan is of the same mind and are contemplating another giveaway to get new readers hooked on the Claire/Russ series.   Do you think that they should give away book 1 or book 6 (book 6 leads into the events of book 7, One Was a Soldier).

Up next is Ms. Spencer Fleming’s thoughts on infidelity.

That describes my hero and heroine. Needless to say, I don’t write Romance. But I do write about a romance, one that’s messy and painful and heart-breaking and life-healing for the two people involved. One that — I hope —   explores the terrible conflict between duty and passion, between commitment and conviction.

I write mysteries. My first book, In the Bleak Midwinter, has a pretty basic plot: a baby is abandoned on the doorstep of a church. Its mother is murdered. The Episcopal priest who found the child and the small town chief of police work together to get to the bottom of the story. It’s a whodunnit. But as a reader, I adore romance. And I love when other genres–crime fiction, thrillers, sf–include a healthy portion of romance on the side. So when I started that first book, I knew I wanted a love story running alongside the mystery. 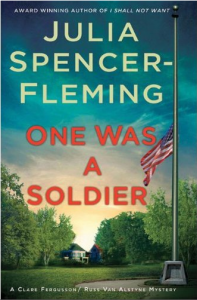 Mystery+romance is not a new formula. In fact, it’s almost a pattern in amateur sleuth series. The librarian/shop owner/garage mechanic meets a hunky cop in Book 1. In Book 2, they date. In Book 3, they almost break up because her investigation gets in the way of him doing his job. In Book 4, they’re engaged, in Book 5 they get married, and by Book 6–well, you’re not reading Book 6, because the relationship was never all that compelling. It was something to fill up the sleuth’s time between finding bodies and chasing down clues.

I wanted to write something different. I wanted to write a book where the relationship between the two protagonists was as high-stakes as the crime. I wanted to write a love story that had as much tension as a thriller, that would make a reader put her hands over her eyes and say, “Don’t do it! Don’t go there!” I wanted to write an affair of the heart that left the partners as battered and bruised as Sam Spade on a bad day. I needed two characters to fall in love; deeply, believably, hopelessly in love; and I needed them to have rock-hard, unshakable, insoluble reasons to stay apart–reasons that made sense in 21st small-town New York state.

There are plenty of romance purists out there who take one look at that description and say, “Not for me.” I can respect that–I won’t knowingly pick up a book where a child dies, where Scots brogue is abused, or anything in the vein of Playboy Sheiks and Virgin Stable-Girls. However, the most interesting part–to me–of the relationship between Russ and Clare is their attempt to not cheat. To draw the line and stick to it, even when they’re not sure where the line is. To honor their commitments and struggle with their feelings.

The mystery plot of every book need to be wrapped up satisfactorily, if not neatly, and conclude. The story of Russ and Clare’s relationship, however, limps and staggers and dances on. For me, the writer, that contrast is emotionally and aesthetically gratifying. For you, the reader? I hope it makes you gnash your teeth and howl and go right out and read the next book.

Julia Spencer-Fleming is the Agatha and Anthony-award-winning author of the upcoming One Was A Soldier, the seventh Clare Fergusson/Russ Van Alstyne mystery.

One Was A Soldier is available for preorder at: Amazon Barnes & Noble Books-A-Million Borders Powell’s Books and your locally owned independent bookstore.

You can read more about Julia Spencer-Fleming’s books in this 2008 guest post by Val Kovalin on Dear Author.     Let us know in the comments if you want a no risk exposure to JSF’s amazing writing by commenting on how you voted in the poll (i.e. book 1 v. book 6).

All winners have been emailed.