JOINT REVIEW: Give Up the Ghost by Jenn Burke

Sirius and I jointly reviewed the first book in this series, Not Dead Yet and we decided to keep the tradition going with the follow up book, Give Up the Ghost.

Warning: spoilers for the first book follow. The series really does need to be read in order. Proceed at your own risk! ~ Kaetrin 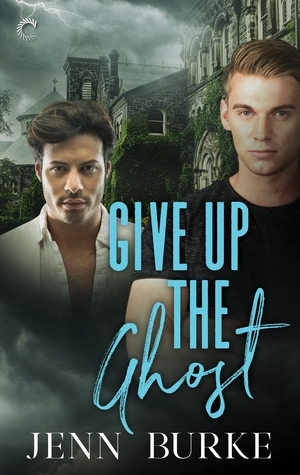 Kaetrin: I was serious about the spoilers. The blurb itself of Give Up the Ghost gives away a big reveal from the first book and it’s impossible to talk about this story without referencing the endgame of Not Dead Yet.

Give Up the Ghost picks up the story a few months after the events of book one. Hudson as retired from the police force and he, Wes and Iskander have opened Caballero Investigations. Hudson and Iskander are the licensed investigators in the firm but Wes has special ghostly talents and he’s very good at finding out information on the internet and Evan helps out in the firm as well.

Hudson and Wes are all but (but not quite) living together in Hudson’s house. Hudson keeps asking Wes to move in permanently but Wes is hesitant because he’s keeping a big secret; since he banished the demon back to the beyond, his magic has increased exponentially. The Crown of Osiris did something to him. He’s having difficulty controlling his magic. He has a mental “box” but the lid won’t stay on. Every now and then he just has to let some out. He’s learning about heretofore unknown powers and he’s not sure of the limits of them yet. He didn’t say anything to anyone, not even his platonic soulmate, Lexi because reasons. When it comes to Hudson, Wes is terrified that his new magic will be too much and Hudson will bail. The more time has passed, the harder it is for Wes to confess all and things are reaching a breaking point.

Added to that, Hudson is running mysterious “errands” and Wes is feeling a little shut out of the investigation firm as both Iskander and Hudson resist taking on any paranormal cases.

Then, supernatural creatures start appearing in apparently random places in Toronto though “tears” in the veil between the Living and the Beyond. What is causing the tears? What may come through if they’re left untended? Oh, and Michael, Wes’s ex (and the guy who murdered Wes all those years ago) keeps appearing, trying to tell Wes something.

Lexi and Wes have been helping out a friend at a shelter for LGBTQIA youth, Aurora House and, Kee, the genderfluid person who runs it, has asked for help. Hudson is reluctant to get involved but Wes is insistent they do something. When Lexi is hurt during preliminary investigations, Wes is devastated. Then, ghosts start doing weird things – who ever heard of a ghost-thief (that’s not Wes himself)?

Wes needs to come clean to his friends about how his magic has changed, work out what the hell happened to him and how to control it, work out why these tears in the veil keep occurring and stop them and banish the evil which has come through while they’ve been open. And try and save his relationship with not only Hudson but his found family too.

Wes makes some very questionable decisions throughout the course of the book. The initial one – not telling anybody about how the Crown affected him I could understand but there was something involving Iskander’s family which was extremely poor form. To be honest, I’m not convinced enough soul-searching was done about it. The ends do not always justify the means and I think Wes got off pretty easily for it.

Sirius: This was an excellent summary Kaetrin.  Yes, as much as I do not like the characters not communicating as a plot device, I surprisingly found myself almost not having any issues with Wes being silent about his magic acting up.  What happened to him was too shocking and I accepted that he needed time to process it.  That thing with Iskander’s family which would be spoilery to talk about. Oh boy – yes, while I got that it was an extension of what was happening to his magic, but I really wanted somebody to smack Wes and more than once.

Kaetrin:I did like that Wes is far from perfect. That might sound strange but even though I disapproved of some of his decisions, I appreciated that he was a flawed person who was trying his best. Even when he messed up, I accepted his intentions were good. Also, too I think his magic was messing with him a little and it didn’t surprise me things got wobbly for a while. Once the truth is revealed however, he is able to lean on his friends and on Hudson (after they all forgive him of course) and this helps him actually deal with the problem (of course).  I was glad the truth didn’t take too long to come out.

Sirius: Absolutely, I think big part why I did not mind that not communicating was that the *not communicating* part stopped pretty early in the story. I think at forty – forty five percent?  I also liked that the characters did not take too long to forgive Wes.  Yes, he needed to hear exactly why he hurt his friends, but I was very happy that we were not hearing the discussions about “forgive or not forgive” or something to that effect.

As it happens, Hudson has been keeping some things a bit secret too – not anywhere near the magnitude of Wes’s but still. This brings the pair in contact with someone who I believe will appear in the next book (and maybe even get his own one day?). Some of this character’s inputs felt a underdeveloped to me. They weren’t sufficiently explained or foreshadowed in the narrative so when they occur they felt very convenient and a little deus ex machina.

Sirius: LOL.  We should have just signed on single review, it sounds like.  This character’s knowledge and commentary and guys’ acceptance of him sure did feel convenient, it was not horrible, did not jerk me out of the story all that much, but it caused me to say : Huh?

The resolution with Michael was a bit underwhelming as well. I had expected more. You?

Sirius: I guess I finally found something I disagree a little on.  I did not see what else could have been done to bring this plot line to a closure

Kaetrin: I suppose I was expecting it to go a different way but in the end I didn’t find his storyline compelling.

I did like the way this book builds upon the events of the first and embeds the found family vibe – the group have expanded even further by the end of it. Hudson being all fatherly with Evan made me chuckle a little.

Sirius: Yes, once again. I thought the connections seemed real and I felt genuine care and concern they all felt for each other. I really like Evan.

Kaetrin: I was a little surprised by how forgiving Lexi was of the person responsible for her injury. She’s a better woman than I am is all I’m saying.  Still no indication of a potential romance between Iskander and Evan though Iskander’s sexuality is made explicit so.. maybe one day? (I am such a romance reader!!) Also I really want someone for Lexi too…

The book was full of action, drama and risk but it stumbled a little at the end for me where some things happened or were revealed which didn’t seem to have narrative support. Or at least, not enough for me. I’m hoping there will be more information about Hudson and Wes’s connection in book three. It kind of came out of left field for me. What did you think Sirius?

Sirius: Signing on a single review sounds better and better.  I am not sure what you mean about things not having narrative support – if you are talking about Wes and Hudson’s connection  then yes, absolutely. It felt as if author wanted to add “cherry on the top” or give an extra cookie to the characters and it just did not work for me. I knew and felt that they were deeply in love already. Was there anything else that did not work for you? Because for me besides the character mentioned previously everything else pretty much did.

Kaetrin:I was trying not to give away a spoiler but I ended up being too vague! Yes, regarding the special connection Wes and Hudson have. That came completely out of nowhere for me.

The worldbuilding in the series is different and interesting. I enjoy the Toronto setting and the fresh take on the paranormal the books offer. I really like the way the author shows the intimacy between Hudson and Wes and how the latter’s demisexuality fits within their sexual relationship, how accepting of each other’s desires they are. There was plenty of romance and relationship development; it was the mystery side of things which didn’t entirely work for me, mainly because of those things which seemed to come out of the blue. Grade: B/B-

Sirius: I liked that Wes explained how he felt about establishing personal connection without naming it simply because I was not sure he would have the vocabulary for that.  But yes,  I would give a B as well.