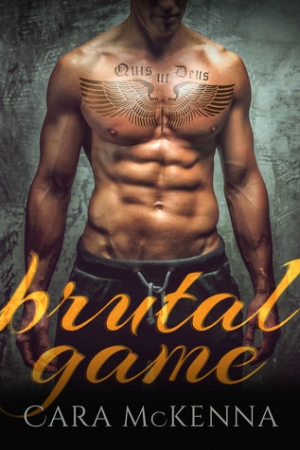 *Spoiler Alert & Trigger Warning: A major plot point, which is not revealed in the cover copy, is discussed in this review. Also, per author: This book contains consensual but intense rape role-playing scenes that some may find upsetting.

A note to readers:

Most fans of Willing Victim felt the only drawback to the book was the abrupt HEA, although in the reissue which was released this last summer, there is the addition of a new chapter, which helped to address those concerns. Still, a sequel was certainly welcome considering how much growth there was still to be had with this couple in order for fans to feel they received a fully realized HEA.

Because Kaetrin and I were both devouring the ARC of Brutal Game concurrently we decided an epic joint review on Dear Author was the only logical solution.

Michele: Just reading the back-cover blurb put a silly smile on my face. I was thrilled at the thought of being back in this couple’s world. I had no idea what direction this story would take because for me it was an autobuy simply because it was the rest of Flynn and Laurel’s story.

Kaetrin: Yes, I didn’t bother reading the blurb – “sequel to Willing Victim” was enough for me to make grabby hands.

Michele: What I love most about both of these books is the time taken with two adults negotiating their kink. Both characters are always so careful to make sure that no matter what wild things are about to ensue in the bedroom, everyone is happy, comfortable and the sex is consensual—grown up erotic romance. I thought Willing Victim had more rape fantasy and voyeurism and was edgier than Brutal Game, but also Flynn and Laurel were a new couple in the first book, negotiating their kink and in the second the couple is negotiating their relationship and the kink has already been settled.

Kaetrin: Yes, Brutal Game has a very different vibe to Willing Victim. I enjoyed it for its own sake but readers expecting something similar to the first book might be disappointed.

I agree with you about how Flynn and Laurel negotiate their kink. There is no doubt that everything they do is consensual and that is a hard line for Flynn. What he fantasizes about, what he enjoys with Laurel is only possible because of her consent. He would never ever go there without that, freely given.

Michele: As usual, the writing was exquisite. Cara McKenna’s fully realized characters and raw-as-sandpaper realism bring the setting and conflict so close you can reach out and touch it. Sometimes I find myself stopping just to admire the lovely turn of a phrase or the intricate, detailing wording used to describe a character’s emotion. The workmanship and the master’s level of craft bring a tear to my eye. I consider Cara McKenna to be one of our best romance writers, in any subgenre.

Kaetrin: What struck me most about the book was the frank and open conversations Flynn and Laurel have about sex. It’s at a level I haven’t seen before. It’s entirely practical and grounded in reality. I suppose for some readers is may detract from the mystique of the romance novel sex scene but for me, it indicated just how comfortably intimate the couple were and that gave me extra confidence in their HEA.

He moved his legs between hers. “You need lube?”

He snatched the bottle off the shelf, and if his fingers were cool the gel was frigid.

“Don’t think about it,” he breathed, easing two thick fingers inside her. “Think about this.”

Flynn isn’t fazed by the mechanics of Laurel’s body. As he says:

“Your pussy doesn’t scare me, honey.”

And there’s also this exchange:

“I mean, I never imagined I’d let a guy have sex with me during my period. But this is like… I dunno. I guess what I’m saying is, it amazes me how unafraid of the female body you are.”

“Helpful when you’re a straight guy.”

“No, you have no idea how terrified guys are of women’s bodily functions. And how gross it makes us feel. But you really don’t give a shit. Are you sure you were raised Catholic?”

He laughed. “When you’re into what I am… It takes communication. Plus I attract pretty ballsy, outspoken women.

It didn’t detract from the erotics or intimacy for me at all – quite the reverse actually. What did you think of it Michele?

Kaetrin: For all that I enjoyed the story, it also had a pregnancy loss storyline and I always find that difficult to read. I tend to either fall apart or pull so far back from the story that I lose all connection to it in some kind of weird self-preservation thing. I think I did the latter in this case. I think it was handled fairly well but I’ll say that Laurel bounced back more quickly than I expected, all things considered.

Michele: I was surprised by the turn the pregnancy trope took and I was especially surprised by the abortion discussion between the couple. I think this is because again, I usually read more fantasy-based erotic romance and abortion talk just never happens. In fact I enjoy books that are the other extreme—breeder books where the kink is that the hero wants to get the heroine pregnant. But even in regular romance I’ve read…I really can’t remember reading a romance that has such a frank discussion of abortion. I wasn’t disappointed in any way by this, just surprised to see such “truth talk” in my romance. And then after I got over my surprise I was happy—happy to see this author role-model between the characters, such a difficult subject and not glossing over it. And one where the hero is so supportive about a woman’s right to choose. Flynn was pretty darn amazing.

Kaetrin: I liked the discussion about reproductive rights too but then Laurel had a miscarriage and things got quite difficult for me as a reader at that point. I have no issue with abortion as a legitimate choice but miscarriage is always difficult for me to read about. I usually avoid it actually.

I liked that the story showed readers how Flynn and Laurel got through a difficult time and came out the other side stronger and better off for it. I’d have liked for Flynn to have had one more conversation with Laurel about his feelings though. There was a conversation he had with his sister which helped clarify things in his head but I didn’t see where he actually told Laurel what he’d learned. Just a line to say he’d done so would’ve made me feel better.

Michele: I see what you’re saying, like what he’d said to his sister needed to also be said to Laurel. Yes, that would’ve been a nice addition. Speaking of his sister, a charming dynamic of Brutal Game is how it goes deeper with the secondary characters from Willing Victim and shows Laurel bonding with Flynn’s family, this was darling. It was nice to capture this glimpse of Flynn as a family man.

Kaetrin: What I liked best about Flynn was that he was all in. He’s blunt, often to the point of rudeness but it’s strangely romantic when that bluntness is directed to words of commitment and devotion.

Kaetrin: There was one line in the book I was ambiguous about. Flynn uses the word “retarded” in describing someone potentially not offering Laurel a job. On the one hand, it’s not cool to use that language. On the other, it’s the sort of thing Flynn would actually think. He’s not smooth or particularly thoughtful about other people. He’s thoughtful when it comes to Laurel and his family but he is pretty crude and rude a lot of the time. I think he’s the kind of guy who would alter his language once he understood it was not cool but as he only thought the word, there was no opportunity in the book for him to be called out. I don’t know. It jarred.

Michele: You know what’s weird? I didn’t even blink at that. And I normally would. I’m hypersensitive to demeaning language being used to describe people with disabilities. It must be that I gave this a pass because he wasn’t actually describing a specific person and he didn’t say it out loud.

Kaetrin: As much as I was happy to see Laurel and Flynn get the full HEA, it really was quite a different style of book from Willing Victim. I liked it in its own right but I admit I had been expecting more of the rape fantasy type scenes than Brutal Game contained. There were a couple but there was also vanilla-style sex too. In many ways, I thought Brutal Game followed the usual romance novel trajectory. Willing Victim stood out to me because it was so unusual.

Michele: This is true. But I feel the specialness of this book is the behind the scenes, day to day mechanics of how two people with an edgy kink make a future for themselves. How they pull ordinary out of the extreme.

Kaetrin: Now that you’ve put it that way, yes, I agree. Willing Victim was raw and real and Brutal Game is real but in a completely different way I think.

I think you liked the book better than I did overall Michele. I liked it (apart from the bit where I was curled up in a metaphorical ball in the corner – but that’s about me and not the book). What grade would you give it? I’m going with a B.

Michele: The first book, Willing Victim definitely gets an A+  from me, but I have to give Brutal Game a slightly lower grade, a B+ because it wasn’t as “oh my gosh” as the first book. I was wowed by the writing style in Brutal Game and the way the way the author tied up the intricate threads of the couple’s relationship and kink, which I’m sure was tricky as hell, but it suffered a bit from sequel syndrome.

But one point I’m sure we can both agree on—Thank God this book exists! Kudos to the author for putting it out there for fans to devour. And um, a future Christmas novella or short wouldn’t be remiss. Just sayin’.