So I decided to follow up Lord of Scoundrels with the much recommended Angel’s Blood. This was a bit of a change of pace after the last two books, being contemporary rather than historical, actiony rather than talky, and written in this century rather than the last. Although, like Lord of Scoundrels, it contains a scene in which the heroine shoots the hero for being a dick. Or rather, for threatening her life while in the grip of a sociopathic angel-tizzy.

NB: This review from AJH is the third in his series of “I’m getting to know the romance genre.” His introduction is here. You can buy the book with these links. ( A | BN | K | S )

Oh, I should add that because this is more a response than a review it will contains some spoilers for Angel’s Blood – and that might matter a bit more than for LoS or TF&TF since it’s a more recent book. 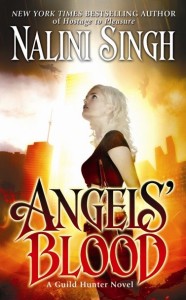 In the spirit of full disclosure I should add that I’m not a complete stranger to the works of Nalini Singh. I picked up Slave to Sensation a few months ago when I was poking around the paranormal section of Waterstones (I mean, the section of Waterstones where you can buy paranormal fiction, not the section that is paranormal in and of itself, although that would be pretty cool). Perhaps I’m showing my nerdboy fantasy-reader roots, but one of the things that impressed me the most about both Slave to Sensation and Angel’s Blood was the remarkably complex but also utterly cracktastic worldbuilding. You don’t just get a shapeshifter story, you get a shapeshifter story in a cyberpunk dystopia, with a psychic vulcan secret police whose brains are the internet. You don’t just get an angels story, you get a story about angels who rule the world with their vampire minions who are in turn kept in check by hunters who fight with superhuman smelling powers and vampire-immobilising computer chips. Ms Singh, I do not know what you are smoking but it is clearly making you awesome.

Our heroine is Elena Devereaux – one of the Hunter-Born (which makes her stronger than normal humans and gives her the aforesaid superhuman smelling powers). Her job is to track down vampires who go on the lam from their angelic masters and bring them back in one piece if possible. Her exceptionally acute sense of smell (this makes a lot more sense in context) brings her to the attention of the Archangel Raphael who needs her to track down the rogue Archangel Uram who has gone – to use the technical term – balls-to-the-wall baby-chewing fucknuts.

Overall I liked Elena a lot. She’s smart, she’s capable, she knows what she wants and what she doesn’t. She’s good at her job, refuses to put up with angelic bullshit, and is so badass that even her hair is armed. I was very slightly bothered by her traumatic backstory (her mother and two older sisters were brutally slaughtered by something supernatural, leaving her with only the emotionally distant father who hated her and his kids from a second marriage). I get that it’s traditional for monster hunters to have tragic pasts, but does it really always have to be the mother who winds up hanging from the ceiling? Basically, though, she kicks ass. And she kind of has to because Raphael is – if you will forgive the lapse into video game jargon – sick OP.

Angel’s Blood feels a lot like an attempt to see quite how far you can push the power dynamics in a relationship before it becomes completely untenable. Yes, Elena is a badass, but Raphael is off the scale. He’s over a thousand years old, basically indestructible, able to fly, turn invisible, and shoot bolts of pure energy that can level buildings. He also rules a tenth of the world, and has the ability to read and control minds.

Elena’s earliest interactions with Raphael leave her in no doubt about who is holding the cards. Almost his first action is to mind control her into cutting her hand open with her own knife, and everything we learn about Raphael (or the Archangels in general) makes it pretty clear that they are seriously nasty people and not in any way to be messed with. We hear about him crushing the skeletons of people who betray him and leaving them twitching and broken in Times Square. We actually see him rip somebody’s heart out without a second thought. He threatens Elena’s closest friends to get her to work for him.

Despite all this, I can totally understand what Elena sees in Raphael. Power can be extraordinarily sexy in its own right, and he’s certainly upfront about his interest in her (although as flirty banter goes I question the appeal of “my cock serves a highly specific purpose” – it makes it sound like some obscure variety of Allen key that you only need for a particular brand of flatpack furniture). The problem, then, is how to have a sensible relationship with a man who can obliterate you with his mind.

There isn’t really a good answer to this (at least not a simple answer). The sheer annihilating power of Raphael is clearly part of what draws Elena to him, and Elana’s absolute refusal to be cowed by that power is the heart of his attraction to her. The difficult thing is that neither Elena nor Raphael alone can bridge the gap between them. Yes, Raphael could choose not to use his power over Elena, but it would still be there and she would always know it was there. And while Elena can try to find ways minimize Raphael’s hold over her, she is ultimately limited by the fact that he’s an ancient being of godlike power and she, well, isn’t. In the end they both have to take responsibility for their own sides of the equation, Elena learns to resist Raphael’s abilities as much as she can, and Raphael learns to moderate his behaviour so as not to become a tyrant, a monster, or just a regular douchebag. It’s a difficult path for them to negotiate, one which ultimately sees them both changing physically as well as emotionally, but by the time they get together it feels like they’ve genuinely worked through the bulk of the problem.

The actual sex is a little bit hard for me to parse. It’s pretty hot, don’t get me wrong, but as a male reader I’m plagued by a little voice at the back of my head that says “wow, I have been doing this seriously wrong for, like, a decade.” Both of the Nalini Singh books I’ve read so far have included sequences early on where the hero bites the heroine’s nipples through her clothes and … is that a much bigger thing than I have hitherto understood? It just seems a little bit impolite to me. I mean shouldn’t you let the lady get her top off before you start chewing on her intimate regions? What if she’s wearing wool or sequins? That could go all sorts of bad.

I’m also a bit disturbed by the sheer amount of control the heroes I’ve encountered so far have had over their penises. I mean, Raphael sort of gets a pass on account of being a quasi-omnipotent being of unbridled power and glory, but I’m not sure I’ve seen a hero yet who hasn’t been able to get inside his partner with one deft thrust. I get that this is kind of a genre convention but … is there some kind of school these guys go to? Do they have to do exercises where they thrust their wangs into smaller and smaller openings from greater and greater distances until they can thread needles with the damned things (I’m pretty sure Raphael could cross-stitch a quilt). Or is it like a posh finishing school? Do they have to balance books on the end until they develop perfect poise? Or like that bit in the original Star Wars – all standing around with their blast shields down and getting zapped by probe droids.

Sorry, that went a bit weird.

My personal inadequacies aside, the shagging worked pretty well for me. I’m pretty sure I get the angel thing – the thrill of touching something that should be untouchable, the combined strength and softness of a pair of powerful wings (I’ll be in my bunk). I had a much harder time wrapping my head around the werepanthers in Slave to Sensation. Werewolves I can do because I know roughly what they’re supposed to represent, but the only panther archetypes I can think of are Bagheera from the Jungle Book and Panthro from Thundercats and really I’m not sure if either of those scream sexy to me. Angels, on the other hand, I can work with.

Plotwise I thought the book hung together pretty well. The viewpoints jump around a bit more than I expected, but I thought the interludes from Uram’s PoV raised the tension nicely (for what it’s worth I read this on Kindle and I think some of the formatting was lost in translation, so Uram’s sections ran into the rest of the text in a way I found slightly confusing). Again, maybe I’m coming at this from too much of a fantasy-reader’s perspective, but I liked the way the world gradually came together as I found out more about Uram, his transformation, and the mysterious toxin that was causing it. I was even pretty anxious to find out what happened to Elena after the final confrontation despite the fact that (a) I was pretty sure she’d survive on account of this being book one of a series and (b) I’d actually already been spoilered for it.

I’m pleased to report that there were no evil fat people in Angel’s Blood (actually I don’t remember any fat people at all) and there are at least a couple of women who the heroine liked and who liked her (Sara, head of the Guild, is Elena’s best friend as well as being a competent hunter in her own right, and the pair seem to genuinely care for each other). I was a bit bothered by Michaela, the most prominent female Archangel, who seems to spend a lot of time being shallow, bitchy and jealous. On the other hand it is a series, and there were fairly strong implications that there was more to her character than initially met the eye so hopefully we’ll see other sides of her in later books.

Everything I learned about life and love from reading Angel’s Blood:if you’re having doubts about a prospective romantic partner shoot him. And aim for the wings. A thousand years is a perfectly acceptable age gap. You can hide a dagger in your hair if you know how. An angel’s cock serves a highly specific purpose.

Next up: Dragon Actually by G.A. Aiken

AJH is a romance novel neophyte and an experienced hat wearer. For reasons that now escape him, but seemed like a good idea at the time, he has decided to blog about his adventures in the genre. As a result, he has been introduced to many fine authors and read many fine books, some of which – to his confusion – contain no wizards, dragons or swordfights. If his rambling pleases you, there is more of it ceaselessly available @quicunquevult.