The Girl with All the Gifts by M.R. Carey

I first heard about this book while discussing dystopian fiction with a co-worker, specifically our shared love for Station Eleven. At first, I was hesitant to buy The Girl with All the Gifts on her recommendation, because I wasn’t sure how closely our tastes matched (Station Eleven notwithstanding – who wouldn’t love that book?). Eventually, I took the plunge, and I’m so glad I did. 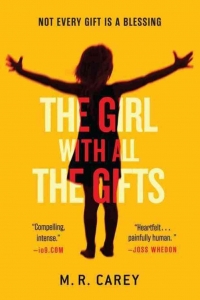 Melanie is ten years old, blonde-haired, and very bright. All her life, or at least as long as she can remember, she’s lived in a locked cell on the Base. Every weekday morning, Melanie is removed from her cell in an elaborate ritual that makes it clear that the people who have control of Melanie fear and distrust her. She’s made to sit in a wheelchair and strapped down, wrists, ankles and neck, while a gun is trained on her, then wheeled down the corridor into the classroom to learn.

Melanie doesn’t mind, because she loves class, but she doesn’t understand the reasons for all of these safeguards, which are also performed on her classmates, each of whom is also locked in a cell when not in class. Melanie’s whole world consists of “…the cell, the corridor, the classroom and the shower room.” The last place is one that the children are taken to on Sundays, fed a big bowl of wriggling grubs (their only sustenance) and then doused with a bitter chemical solution.

From her lessons, Melanie learns about all sorts of things – math and geography and poetry and mythology. It’s from mythology that Melanie learns the story of Pandora, the titular “girl with all the gifts.” Melanie particularly likes mythology because it’s usually taught by her favorite teacher, Miss Justineau. Melanie adores Miss Justineau with the painful devotion of childhood.

In class, the students also learn that the world they inhabit is different from the one they hear about in their lessons – those places no longer exist; the poetry is all from the past. The current world is made up of the Base, Beacon (which seems to be a larger, city-like encampment some ways away, on the other side of London), and the terrifying outside world, full of hungries and junkers. Someday Melanie hopes to be able to go live in Beacon, where she can be outside but still be safe from the hungries and junkers. Her wish is a poignant one for the reader, who’s probably already figured out what Melanie doesn’t know.

Melanie thinks she’s human like Miss Justineau and Sergeant Parks, the gruff, scarred Army man who runs the Base. But she’s not – she’s a zombie, or rather something caught between zombiehood (the “hungries”) and full humanity.

I spoilered the above bit because from what I’ve read online some people think it’s a spoiler. I think it’s pretty obvious, but I was spoiled before I read the book so maybe I’m overestimating how clear it is.

About a quarter of the way through, The Girl with All the Gifts becomes a road story, as Miss Justineau, Sergeant Parks, a soldier named Gallagher, scientist Caroline Caldwell and, of course, Melanie try to make their way from the Base to Beacon, dodging junkers (humans who have chosen to live outside of what remains of society, and whose dispositions seem to be uniformly brutal) and hungries. It’s at this point that the story becomes really very compelling. The characters’ interactions and reactions to the dangers they face, what they learn about the hungries and about Melanie’s true nature kept me reading late into the night.

One of author interviews I read after finishing the book touches on something that was especially true for me: the reader ends up viewing the other characters in relation to how they relate to Melanie: Miss Justineau, in spite of her flaws (we find out a horrible secret about her mid-way through the book), is the kindest and most human to Melanie, so I loved her. Gallagher is a poor sap with a sad childhood (he was born after society disintegrated some 20 years before, or at least close enough that he has no memory of it). He seems to identify with Melanie on some level. Parks is complex – hardened but not, it turns out, ruined by all that he’s gone through. He’s actually capable of change, which seems like a miracle in such a world. Caldwell is as close as the book gets to a villain, treating the children of the base as lab rats to be dissected, with Melanie as her prize specimen. But from her perspective (the book is written in present tense third-person limited view), we get an idea of how she thinks and why she thinks that way. She’s not likable, but she’s understandable and often pathetically human.

The heart of the book for me (and I’m guessing most readers), though, was Melanie. I’m almost tempted to see her as a bit of a Mary Sue, which renders the title of the book sort of darkly, ironically funny. But she’s too fleshed out for Mary-Sue-dom, and of course she has what could be seen as a fatal flaw that keeps her from perfection. But she’s *so* lovable: she’s incredibly smart and brave and she wants so much to be good and worthy of love. Some of that is probably her age, but I also wonder if some of it has to do with her nature – with what she actually is. That factor intrigued me especially in light of the book’s ending.

So, the ending. It’s both devastating and hopeful. Melanie makes a choice that at first seemed ruthless and thus out-of-character for her, but the more I thought about it (and I thought about it a lot), it seemed fitting and right.

The Girl with All the Gifts was a compelling and absorbing read (albeit after a slightly slow start) and featured one of the most sympathetic heroines of recent memory. My grade is an A-.