REVIEW: The Boy Next Door by Nicole Austin

Let me tell you straight up that this isn’t going to be good for your ego. You may want to go to Sybil’s site and just skip this letter. Of course, it was sybil’s blog that enticed me to buy this. God, I really need to stop listening to sybil. I will state from the outset that the virgin/whore theme is one of my least favorite romance book themes. You didn’t even have a good excuse. (An unreciprocated high school crush is not a good excuse). 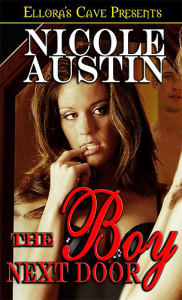 Your heroine, Cathy/Cat acts like a virgin during the day and a vixen at night. She is former stripper who has danced the pole for four years and now owns a bar wherein she simulates several sex acts with both men and women yet she is, wait for it . . . , yep, a real virgin. Her reason? She couldn’t have her first love, Blake Carlisle, who joined the navy when Cat was 16. Cat/Cathy is not only a virgin, but a shy innocent who has a hard time picking out sexy clothes to wear to her job at night. She doesn’t have a problem tonguing a fellow waitress or grinding her crotch in the face of her bartender, but picking out shorty shorts and a peek a boo top has her all aquiver. Despite her penchant during the daytime for frumpy grandma clothes (because there is simply no inbetween clothes for this girl), she loves to lay out with “small triangles of material lay[ing] over her full breasts, covering not too much more than her nipples.”

And she never masturbated before she does it in public next to Blake. Because she is so shy and reserved and all. Despite the fact that she loves to feel her various employees cocks rubbed all over her while dancing. Despite the fact that she is orally screwing her chopsticks at one point (unconsciously, of course). WTF? Are you kidding me? The woman who stripped for 4 years and has public sex on a nightly basis has never even touched herself before? Sweet baby jesus. Are you a man, Ms. Austin, because this can only be a man’s fantasy.

But then I read a section where Steve, Cathy’s brother, and Blake exchange words. Yep, you are a woman because there is no way in hell two guys carry on a conversation that includes “What if I intend to never let her go?” and “I want her tucked safely against my side where no one can ever touch or hurt her.” or “If you hadn’t interrupted us, I’d already have her melting in my arms.” I just can’t see men saying these things. Maybe you meant to say “I want her fucked safely against my side.” and “I’d already have her fucking in my arms.”

Fortunately, the hero had “dazzingly sapphire eyes” and an enormous cock so that made up for all the character schizophrenia the heroine may have. Plus he had “flat, dusky male nipples” which “piqued her curiosity.” What is so wrong with this guy’s nipples that has anyone curious? Did he have three of them? That would peak my curiosity.

Of course, you couldn’t let us forget that the hero was a SEAL. Not only did you mention that he was a SEAL, but it was his reason d’ etre. “He was a SEAL who always succeeded . . .” “Being a SEAL, he was well trained in succeeding . . .” “wouldn’t expect the ex-SEAL to be intimidated by a simple look …” Hmm are you trying to make a point here? Was he used to succeeding because of his SEAL background? I couldn’t tell. You were so coy about it.

And the conflict? Oh yes, Cathy vacillated between giving it up to Blake and not giving it up because she valued her independence too much. And she thought that if she owned her own home as well as her business that she would be immune to Blake’s charm. Because home ownership is always the way to a tighter vice clamp on the vagina. Female homeowners never give it up and always maintain their independence over SEALs who always succeed. But when her dream home comes along, Cathy doesn’t want to take out a loan for it. She doesn’t want to have a mortgage hanging over her head. WTF? Does Cathy live in a dream world? It is better, in her world, to rent and have that money pissed away each month than to make payments on a mortgage and earn a) equity and b) a tax deduction? Meanwhile the property, unless it is in an area with depreciating values, is going to be as valuable as the mortgage itself? But her independence demands no debt.

Of course, after Cat/Cathy gives it up and there really wasn’t any question about that, Blake is called back by the Navy. His duties are so important he cannot wait to see Cat/Cathy but must pack his bags, leave a note and go. What were those duties? As far as I could tell (and maybe my ebook is missing some pages) but he went to help with the tsunami relief effort. Are you kidding me? He has to leave without saying goodbye to hand out food and clothing? But then he returns in the middle of a hurricane that is so severe that Cat/Cathy fears for her life. Did he ride the waves into Southern Florida? Or pilot his own plane? After all, he is a SEAL.

I can’t let the story go without talking about your descriptions. Over the top much? Cat doesn’t have hair, she has “chesnut tresses” that are “bouncy” and frame her “gorgeous face.” Her lips are “luscious” and a “dark cinnamon.” Sometimes they were a “pouty crimson” that matched her “crimson polished fingernails.” Can I suggest that sometimes ordinary adjectives are effective. I.e., red lipstick, brown hair, full lips? F