Oh dear. Yes, that’s what I said when I finished reading this book. During the various stories I also said the following: WTF!?, Shut UP!, No way…, and Huh?

Three to Tango is a collection of four novellas all featuring m/f/m ménages and the tag-line on the cover says “sex is best when it’s one-on-one … plus one”; this is a little misleading because while two of these stories are about ménage relationships, two are more love triangles where the third person causes angst and discord. 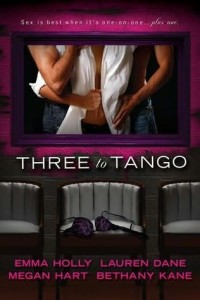 I picked this volume up because I’ve read and enjoyed Emma Holly’s books–this winter I went on an Emma Holly read-a-thon after a conversation with Dear Author’s Janet; I’ve also read Lauren Dane’s Inside Out, which I loved. I had never read anything by Megan Hart, though I’ve been meaning to, and Bethany Kane is a new-to-me author; I love reading collections of short stories, they are great during my short commute to work or for a quick read on an evening when I don’t have the energy to read for hours.

I was sitting in the airport, waiting to board a connecting flight on the way home from a short business trip and reading an advanced reading copy of Three to Tango when I emailed Jane to comment that this read a lot like a draft. Particularly Lauren Dane’s and Emma Holly’s stories struck me as less polished than other of their work that I’ve read.

This is the story of Ava, who returns to her hometown upon her mother’s death and comes face to face with men from her past, Luca and Angelo. Ava has mommy issues (her mother was a selfish alcoholic who slept with married men). Angelo has being gay issues. Luca’s issue is that Ava and Angelo have issues that keep them all from being together.

Of the four, this story has the most flow problems. Sometimes I was confused about the activity going on, and that distracted from the emotional arc of the story. Other times the writing felt unpolished. The story itself is has great emotional potential, but the writing kept dragging me out of it. Here are two examples (the story is full of other examples):

She hesitated as past and present swam in her vision, disorienting her with a wave of memory so very strong and sweet. Her first days there when Maryellen had ever so gently tapped her shoulder each time she found her looking at the floor.

The first sentence is overwritten. The second is confusing. In the context of the story flow we understand that in the second sentence Ava is remembering how Maryellen helped Ava during a difficult time in her life by showing her kindness and caring.

The downy trail of hair leading from his navel inside the waistband of his jeans led to places she’d never forget.

I understand this sentence. And in my opinion it’s overwritten. In the sentence before this one we learn that Luca is in jeans, so delete “inside the waistband of his jeans”. The trail of hair shouldn’t have “led” in the same sentence that it’s “leading”. How about this:

The writing in dirty/bad/wrong feels rushed and it was examples like these that made me comment to Jane about draft-like quality of this book. I don’t recall the same feeling of rushed writing in Inside Out, which as I recall was an emotional, tight book with characters that I loved.

In the end, I found the story less than compelling because the overwritten, rushed writing kept grabbing my attention away from the emotional drama of the three characters. F.

Just for One Night by Megan Hart

This story is the bright spot in the anthology. In Just for One Night Kerry and Jeremy have been dating for a long time and live together, they’re happy and comfortable together, except that Kerry still fantasizes about her high school best friend Brian. Jeremy encourages her to sleep with Brian because the thought of his girlfriend having sex with another man turns him on.

What follows is a satisfying emotional journey where Brian and Kerry have their one-night stand, then realize they want more. While Brian and Kerry each sort out what they really want, Jeremy gets hot imagining them together in bed. Of the characters, Jeremy is the least interesting and I found his actions were thoughtless and short-sighted. This story engaged me, the writing was tight. B

Flipping for Chelsea by Emma Holly

What I like best about Emma Holly’s books is that she creates memorable characters that she treats with respect and care. But I absolutely did not buy into this story because I don’t for a minute believe Liam’s acceptance of being part of a ménage with his BROTHER and the love-of-his-life.

Shay (Seamus) isn’t Liam’s blood brother; however, they were raised together and both called the same people Mom and Dad, and ‘brother’ is how they think of each other throughout the story.

In the end this story didn’t work for me because it felt contrived, and I didn’t believe the characters actions. What really killed this story was when Liam made a revelation about a past relationship/encounter. I  absolutely did not believe it fit with the character I’d come to know throughout the story—this particular moment crashed the entire thing and reduced it in my mind to a gratuitous set up solely for the reader’s titillation rather than a true emotional journey of the characters. F.

On the Job by Bethany Kane

This story is tightly woven story with polished writing. In fact, if not for the ménage I’d probably have rated it a B, even with Walker’s crazy dominating wacko-ness. However, the occurrence of the ménage was such an absurd set up for a spanking (you messed with another dude? I’m going to punish you…even though I told you to do it) that it ruined all credibility of Walker’s character.

Walker and Madeline were in love until Walker joined the Secret Service in an effort to pull himself out of poverty and make something of his life. He comes back into Madeline’s life as her bodyguard, hired by her friend Tony to keep her safe. Tony has pissed off the Russian Mafia and thinks Madeline might be killed because he’s convinced everyone (except Madeline, who considers Tony a good friend and occasional fuck-buddy) that he’s Madeline’s finance.

Are you still with me?

Madeline and Walker come back together and have hot sexual encounters with Walker dominating Madeline and getting all possessive and telling her she’s his. Fast forward and they’re all on Tony’s yacht when Walker decides to spank Madeline for touching another man, then does an about face and tells Madeline to give Tony a blow job because he’s going to prison.

Thankfully this was the last story. I am done with Three to Tango and just want to erase this book from my brain. F.

→ Jaclyn
Previous article: 10 Kindle Tricks and Tweaks
Next Post: DA Week in Review: May 1 through May 8