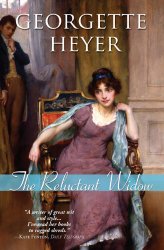 When Elinor Rochdale boards the wrong coach, she ends up not at her prospective employer’s home but at the estate of Eustace Cheviot, a dissipated and ruined young man on the verge of death.

His cousin, Mr Ned Carlyon, persuades Elinor to marry Eustace as a simple business arrangement. By morning, Elinor is a rich widow, but finds herself embroiled with an international spy ring, housebreakers, uninvited guests, and murder. And Mr Carlyon won’t let her leave …

I started reading this book with no prior information about the plot or for that matter anything more about it than it was a Heyer, set during the Regency and had – I assumed – a widow in it. I thought maybe it was a faux widow, a masquerade widow or some such but figured I’d find out as I went along.

The story starts with our heroine Elinor Rochdale arriving at her latest governess post. Elinor isn’t looking forward to this but a woman’s gotta eat and now this is her lot in life. She’s initially surprised that her employer, for whom she pretty much dreads working, would send a nice carriage to pick her up but doesn’t question this as much as she should. After a longer trip than she was expecting, she arrives at what appears to be a run down house. It only gets worse when she gets inside. Not hoarders worse but massive neglect worse. She’s shown into a room where a man she assumes to be the husband is waiting. Fairly soon, they’re confusing each other until they realize they’re confusing each other and then the truth emerges.

He is Lord Carlyon who thinks she’s answered the type of ad that is only found in romanceland, namely to marry his dissolute cousin who due to his excesses probably won’t live for long. Carlyon’s side of the family, and indeed most everyone who knows Eustace, despises him. In return, Eustace loathes just about everyone but especially Carlyon whom he, Eustace, believes is trying to inherit Eustace’s run down estate. Due to a will which is also probably only found in romanceland, if Eustace dies without marrying, the estate goes to Carlyon who doesn’t want it. Hence Carlyon wants someone to marry the wretch to prevent this.

Elinor and I are both struck dumb by this situation but Elinor rallies and refuses. Just as Carlyon is urging her to reconsider, his youngest and ramshackle brother Nicky arrives with the news that he’s been in a fight with Eustace who has been mortally injured. With no time to lose, Carlyon basically badgers Elinor into acceptance, waves a special license he just happens to have, picks up the parson on the way to the inn and off they go. One quick marriage and new will later, and Eustace only goes along because this will keep hated Carlyon from inheriting, and Elinor is married. Shortly later she’s also the widow of the book title.

At this point I stopped for a moment to consider why I was going along with this plot. The only things which immediately came to mind were it’s by Heyer and both hero and heroine regard it as outlandish. For some reason as long as they also thought it strange too, I could accept it. As Carlyon outlines his reasons to Elinor, they make a kind of bizarre sense and well, it’s Heyer and I still thought it would eventually be fun. Elinor’s excuse seemed to be that while Carlyon is hard eyed and brutally frank, he is also one of the few people to seemingly understand her hard lot in life and how far socially down she’s come after her father squandered his money and committed suicide. She might be poor now but she is good ton.

Another Carlyon brother, the one in politics in London, arrives and is astonished as well at what’s happened. He also brings news that a key military document has gone missing and must be found. The next day Elinor travels back to her new hovel, I mean home, and starts tidying up. That night a strange man appears in her home and after an even stranger conversation, he leaves and she can’t discover how he got in. When Nicky arrives, together they search the house and find a hidden entryway. At this point, things take an even weirder turn. The man appears again the next night and accidentally shoots Nicky but gets away. Now these two are convinced he’s after something but are not sure what.

A conversation with Carlyon and brother John reveal that it might be this document but all are confused about how wastrel Eustace could be involved because, you know while he is a useless sot, he’s also family. Mustn’t suspect family of anything havey cavey. Carlyon also insists that Elinor, despite her protests, will be safe staying there and doubts anything could happen to her.

By this stage a pattern was emerging. Elinor was coming off like a shrill shrew for daring to complain about unknown people wandering through her house at night and any possible danger while a highhanded Carlyon condescended to her, waves off her concerns and all but patted her on the head. Her old governess, whom Carlyon had fetched from London to stay with Elinor, also backed him up because he’s a Lord who was kind to her and, well, he’s a man so he must know best. Grrrr.

Meanwhile ebullient and high spirited Nicky and his overgrown dog bounce through the story leaving trails of chaos in their wake. Far too much time is spent on this dog and Nicky’s full bore and slang filled delight in danger. Elinor’s reasonable, IMO, objections are consistently overruled by just about everyone. The Carlyon men debate and discuss the missing document, Eustace’s involvement and the rest of the issues far too long without anything actually getting moved forward or in any way resolved.

It also dawned on me that Carlyon and Elinor were spending little time together and when they did, there was mainly friction and annoyance, at least on downtrodden Elinor’s side. Where, I wondered, was the romance? I hadn’t seen a bit of it and at this point, I was 2/3 of the way through the book.

More people showed up and took up time and energy, more time was spent looking for whatever was hidden and despite Carlyon’s assurances to her, Elinor kept getting in danger and eventually got hurt. And to my annoyance as well as Elinor’s he basically blew this off and calmly stated she probably didn’t have anything to worry about. Never mind the lump on her head from where the villain conked her. I wanted to conk Carlyon.

I was also skimming like mad because just about everyone was making me fume plus I had ceased caring about the document, the spy or much else. Frankly skimming was probably what saved me from imploding as Carlyon highhanded his way through not telling Elinor something she should have known, took over the denouement of the document and then in the last 2 pages proclaimed his love and proposed marriage. Unlike Elinor, who after a bit of spirited outrage eventually meekly gave in and said yes, I’d have pushed him out of the carriage.

Perhaps this is a book one must be in the mood to appreciate. Maybe I was supposed to read it as spirited fun and good laughs but since it failed me both as a romance and as a suspense/mystery, it gets a F and I never thought I’d give a Heyer that grade. Someone, please tell me what I’m missing about it.