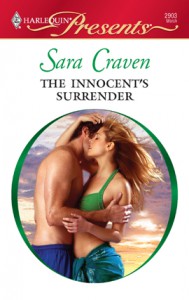 I was very excited to see that you had a new release out. You are one of my favorite Harlequin Presents authors. Sure, you have some rape books in your past, but this is 2010, and those are a thing of the past, right? Apparently not. The Innocent’s Surrender started out innocuously. The heroine, Natasha Kirby, is summoned to meet with her foster brothers regarding the failing family business. Her brothers want her to promise to marry Alex Mandrakis, their chief rival. The promise will somehow allow her family to gain enough time and confidence with bankers to allow them to gain financing to support the efforts to revitalize the family business.

While Natasha initially resists, she is assured that it is just a verbal promise and that Alex, a pursued bachelor, would not even be interested in her proposal. She signs the agreement and returns to London thinking nothing more of the situation.

Natasha is summoned yet again and when she arrives in Athens, she is whisked away by a car service. Natasha believes she is headed to her brothers’ homes but instead she is taken to a stranger’s home and marched into his bedroom. There she finds Alex Mandrakis, nude from the waist up, in bed and covered only by a sheet. He orders her to strip and get in bed with him. Apparently another letter was sent, ostensibly by Natasha, filled with lewd suggestions of what she can do for Alex and he wants her to fulfill those promises.

Natasha refuses. She attempts to leave and finds the door locked. She contemplates climbing through a bathroom window. Alex warns her that his guards will only bring her back to his room if she manages to escape. The only way out, according to Alex, is to have sex with him. She begs him to allow her to leave, debasing herself. He is unmoved. Natasha is left with little option. To worsen the matter, Natasha was dating someone and she realizes that this event will negatively impact her relationship with the man in her life.

UP TO that moment Natasha had only really thought about the outrage to her feelings, and the nightmare effect on her life of this unbearable, shameful indignity that was being inflicted on her. It had not occurred to her that her first experience of sex might cause her actual physical pain.

Her taut muscles shocked into resistance, she wanted to cry out to him that he was hurting her, and beg him to stop. To give her unaccustomed body at least a little time to adjust to the stark reality of his penetration of her.

Yet she did nothing, said nothing, determined not to grant him the satisfaction of knowing that anything he did could affect her in any way-‘pleasure or pain

Despite this event, Alex never really apologizes or acknowledges that he has essentially raped Natasha and she herself does not treat this as rape. Alex excuses himself by telling Natasha that he wanted her badly. Alex does treat Natasha better after this incident and somehow Natasha finds herself in love with him, but she believes Alex only sees her as a whore, a prostitute and not someone worthy of making his partner.

I think if that scene had been omitted, I would have enjoyed this story but I found the rape to be offensive particularly when it was, at best, excused, and at worst, unacknowledged. F

→ Jane
Previous article: My First Sale by Pam Jenoff
Next Post: Whither the Reader