REVIEW: The Contract by Zeenat Mahal 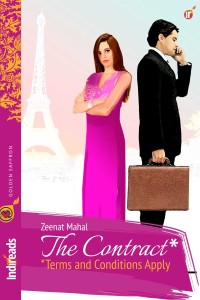 “…I’ll pay you a monthly salary to behave and appear for all practical purposes as my wife…If you agree, the marriage vows can be taken on the phone on Saturday, since I have an hour free in the morning.”

Circumstances have forced the young divorcée, Shahira, to accept Hussain’s unusual proposition. As per their contract, she’ll have his name, will be paid to look after his ailing mother and motherless daughter and will be left well alone by him. Perfect!

Until her new husband decides to stop playing by the rules…

While perusing the latest offerings from Indireads, I remembered how much I enjoyed “Haveli” and how much people at DA expressed interest in reading more books about South Asia. Especially ones using different arranged or marriage of convenience plots. Voici, I thought, here’s a book that will cover all bases.

One reason I love to read books set in a country other than my own is for the chance to vicariously live there for the duration of the story. “The Contract” allows me to do just that. It’s packed with little details about life in Lahore, Pakistani families, weddings, Daahta Saheb and life in general. I was eating all this up and looking for seconds. This is why I read non-US set books.

The growing relationship between Hussain’s mother Aunty Salma and Shahira is wonderful as each finds that which she has longed for – a loving mother-in-law and a daughter-in-law to dote on. Salma also takes Shahira’s son under her wing and gently scolds Sharhira when she protests saying that’s what grannies are for.

Hussain might be a high stakes business wheeler and dealer but Shahira puts him in his place a time or two when he takes the high hand with her over their initial marriage negotiations. He finds himself intrigued but still not falling at her feet – which is a good thing to me. They scheme and snip at each other as they attempt to keep the rest of the family from guessing the truth of their arrangement and seemed evenly matched to me. I was looking forward to them finally discovering each other when some sand got tossed in the Vaseline.

First an Evil Other Woman appeared. The novella is short and there’s a lot of ground to cover so I suppose I shouldn’t have been surprised when this person was little more than a tissue paper thin stereotype but I would have liked to see a bit more depth to her. However while I could easily dismiss Nudrat, something else occurs that got me steamed.

Shahira was very firm in her demands for no sexual aspect to their marriage. When this suited Hussain, he cared less. But once he decided he wanted to change their arrangements, he was determined to get his way. Shahira all but tells him she was sexually abused by her first husband. While his initial response was dismay for what she went through, in the next breath he turned on the seductive charm again and says,

“You’ve been divorced for six years.”

“Seven, actually…but who’s counting?” she laughed nervously, still a little embarrassed.
“That’s a long time to remember. You should have forgotten any bad experiences by now.”
He gave her another sultry look.

I wanted to slap him through my ereader. No, actually I wanted to knee him in the nuts. She should have forgotten any bad experiences by now?! She should have forgotten being raped?! Really? Asshole. He’s amazed – amazed! – that she’s still traumatized by what (his words) “that bastard” did to her. Hussain just won my prize as the prick of the year. His later anger at Shahira for not telling him she spoke Arabic (of all things to be pissed about) didn’t help. His smug belief that their night of hot loving near the end of the book would fix everything had me rushing to get through the end of this one. B for the local color and Shahira’s strength, F for Hussain.