REVIEW: The Body in the Woods by April Henry 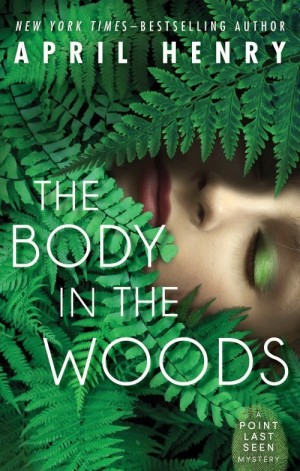 Help me. I think I’ve done something to anger the universe. Why do I say that? Because I am lost in a swamp of books that, at best, can be described as meh. And at worst —

At worst, I get The Body in the Woods.

The premise is promising. Teenaged volunteers for a local search and rescue team stumble across a dead body while looking for a missing autistic man. Investigative shenanigans ensue. I can dig this. Search and rescue volunteers? Awesome. Teenaged amateur sleuths? I loved Scooby Doo and Nancy Drew as a kid. How can this go wrong?

Let’s start with the three main characters: Ruby, Nick, and Alexis. Were their characters poorly fleshed out? Yes, but that’s not actually my complaint. All three of them have rather problematic depictions.

First, we have Nick. Nick’s father presumably died fighting in the Middle East and because Nick idolizes him, he dreams of becoming a soldier and living as a hero. And for various reasons, he’s prone to exaggeration and self-aggrandizing. Perfectly reasonable characterization. Then we discover Nick also has ADHD and I start to squint. Nick’s ADHD is referred to multiple times in the story as something both his mother and older brother worry about and I found myself asking that if this diagnosis is so well-known, is there any treatment happening? Is he taking medication? I don’t remember either being the case but if I’m wrong, please correct me.

But the main reason for my squinting at Nick? He’s a creeper. During the sections from his perspective, we see him ogling girls, finding excuses to talk to disinterested girls and thinking up ways to touch them. What the hell, I’m supposed to sympathize with this guy? Combine this behavior with the fact that Nick has ADHD, and I feel uneasy with the narrative implication.

That brings us to Ruby. Ruby is prone to obsessive behaviors. She’s viewed as strange by pretty much everyone around her. I read her as being neuroatypical — but perhaps undiagnosed. It’s not just the way she fixates on things. It’s the way she doesn’t understand human relationships and interactions and the way she assumes “roles” (“Good Daughter,” “Best Friend”, etc) when dealing with people. It’s the way she doesn’t know what’s appropriate behavior in various situations. I’m on board with all this but the way the narrative treated her — Ruby is played up as the odd duck and class weirdo. There are scenes where, due to her inability to read other people and determine what’s appropriate, the other characters find her annoying and I personally thought the narrative reinforced this impression.

Which brings us to Alexis. Alexis is poor. Her mother is mentally ill. Bipolar, of course, because all the “bad” parents of YA have bipolar disorder as far as I can tell. And this is not the dubious depiction of bipolar disorder that we see in books like Fangirl where the manic phases coincide with creative highs. No, this is full out off her meds and needs to be committed because the mother is a danger to herself and others but especially her daughter.

I don’t even know what to do with Alexis’s backstory. It’s classic “child takes care of mentally ill parent” played for sympathy and pity. Poor Alexis! She has such a hard life! No dad in sight, she lives off food stamps, and has a sick mom who refuses to take her meds!

Any one of these characters presented alone probably would have made me squint but all together? Side eye. Maybe the narrative is not intentionally saying anything but it’s definitely implying some things I don’t like. I don’t think I’m imagining it. There are some hinky things being said about people with mental disorders and who aren’t neurotypical, right?

As for the actual plot, save me. It was a mess. After finding the body, the team of Ruby, Alexis, and Nick decide that they can do a better job than the police themselves. Well, no, Ruby does because her obsessive behaviors make her pay closer attention to details than the police themselves and through the powers of Google, she quickly realizes the police have overlooked the fact that there is a serial killer on the loose targeting homeless girls.

Because of this, Ruby recruits Alexis and Nick in her impromptu investigation even though they’re not actually friends. Why? Because Ruby doesn’t have friends (she’s the class weirdo, remember?) but since Alexis and Nick were on her SAR team, they’ll help her, right? And they sort of do — except Nick uses the opportunity to inflate his own self-importance and Alexis vanishes for several chapters because she has to look for her mentally ill mom who has run away from home. But that subplot is not really extraneous because Alexis’s search leads her to mingle with homeless people (which included sleeping in a homeless shelter) and that offers her some insight into the case!

In case it wasn’t readily obvious, these were not the shenanigans I had hoped for when I picked up this mystery thriller. Of course, there are the more familiar tropes: multiple suspects, red herrings, wrongful arrests, and the killer targeting one of our protagonists. But combined with the other things, I just couldn’t take any of it seriously. If you’re going to include mental disorders in your book — even if it’s not the focus as in a problem novel — please treat the subject with the care it deserves. Not as a convenient plot device or personality quirk.

I just can’t recommend this book to anyone. It does move fast so I can see why some readers would find it a quick read but the characterization left much to be desired. That’s not even addressing the issues regarding mental disorders. It is the first of a series and based on the premise of the next book — budding creeper Nick is the main suspect of a murder because he’s a loner who plays first person shooters — it continues along the same vein. F