After this book, I wondered if the new thing in New Adult is love triangles and super selfish heroines. Is this the new *thing*? Is it a result of Twilight’s fake love triangle? Does it feed a wish fulfillment of being the center of all the attention? It could just be Vampire Diary fan fiction.  In the book Harper says

I felt like Elena from Vampire Diaries. She has two insanely hot men who are in love with her and would do anything for her. One of which, she would give almost everything to be with, and the other she continues to push away, even though she can’t ever actually stay away, so she won’t have to admit she was in love with him too.

I’m not certain and I’m probably not the right audience for this book. However, my grade is not completely dependent on the ineptly executed love triangle but the non stop eye rolling what the f__ck reactions of everyone that circles the orbit that is Harper. 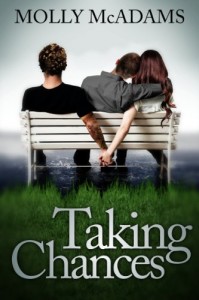 Eighteen year old Harper goes to college across the country away from her controlling and distant Marine father. It’s her first taste of real freedom. At college, Harper quickly makes friends with her new roommate, Breanna and is taken to a party where Breanna’s brother lives with several other guys. Harper quickly gets a nickname “Princess.” This is a companion to the nickname she was dubbed by the recruits in her father’s regiment – Blaze – describing her habit of frequent blushing.

Harper is a hot commodity. Breanna’s brother Chase shows immediate interest as does his roommate Brandon primarily because she is catnip to the boys: “Seriously hot”, “snarky and sweet”, and to top it off, she’s a virgin. She doesn’t realize how hot she is, of course, and is monumentally surprised that one of her father’s Marine recruits actually has a crush on her. It’s like One Direction wrote that song JUST FOR HER.

Harper is turned off of Chase (only not really) because he is seen with several girls hanging off his arms. Yet, despite her protestations that she wants nothing to do with him, she sleeps platonically with him that first evening so Chase can guard her virtue from the other dogs in the manger.

Harper chooses Brandon over Chase and you make a valiant effort into creating another hot, dangerous boy in Brandon but it doesn’t work. He’s too long suffering and too sweet and too generous to be a bad boy and his tats and underground fighting don’t alleviate that. So while we are supposed to believe that Harper really loves Brandon, her constant fantasizing about Chase diminishes any impact that Brandon might have on the reader. Even the positive goodreads reviews, of which there are many, focus a great deal on Chase.

The love triangle creates a lot of drama for Harper, Chase and Brandon. Brandon isn’t perfect in Harper’s eyes because sometimes he is willing to go fight right in the middle of their make out sessions. How outrageous is that, right?  In Harper’s eyes it is a huge sin because she should be first and foremost in Brandon’s mind. As in Thoughtless, Harper has nightmares she is having sex with Chase and Brandon walks in.  As in Beautiful Disaster, there is a scene where Harper is at a fight with Brandon and is placed in jeopardy by another jerk.

It’s fairly important to remember that Harper is 18 and that the three of these kids are college students yet Chase has a trust fund, Brandon earns enough money fighting to buy a gym and pay lavish salaries, and Harper – working in the base commissary – has saved enough money to buy bags and bags and bags of clothing and an Expedition. There is no coming of age for Harper. She learns nothing when she goes to college and I’m not even convinced at the end of the book she actually plans to get a degree. Her life path was the result of stupid decision after stupid decision, or more accurately, stupid inaction after stupid inaction. It’s hard to sympathize or even root for Harper. Why did I finish the book? Because the WTFery was off the chain.

This is a contemporary but there is no attempt at any realism in any aspect of the story. Not in the age of the characters. Not in the setting (college is almost non existent). Not in the actions of the characters.  I guess Harper being super selfish and self absorbed could be realistic but I like to think that people like her are few and far between.  No amount of “I love them both” refrains rouses any sympathy in me for her situation.

The rest of the review is in spoilers because if I even obliquely hint at the events herein no one would believe me.

[spoiler]Harper and Brandon date for the entire semester. He is totally in love with her. Chase flirts with her and she’s intensely attracted but she stays physically true to Brandon. Harper sleeps with Brandon regularly and they fool around quite a bit, but she doesn’t give Brandon her virginity. It has never felt right for her.  She goes home with Brandon for Christmas and gets close with his family.

I helped her cook, we went to get our nails done together and had a night of romance comedies after we’d sent the boys away. I could easily see myself in his family, and though that thought after only four months into our relationship scared me, it kind of exhilarated me too. I wasn’t sure if I was ready to talk about marriage, but eventually, I think I’d like to head down that road with him.

But she promises to ring in the New Year with Breanna and flies back to San Diego the day of.  Chase gives her a ring on New Year’s as a belated Christmas present.  On New Year’s, she and Chase share a torrid kiss. Before Brandon returns, Harper has allowed Chase to ink her. Has accepted an expensive, custom made ring from him, exchange “I love yous” and then proceeds to give him her virginity.  She thinks

I now understood why I’d never been ready with Brandon, I was always meant to do this with Chase.

Of course she did.  But then when Brandon returns, she doesn’t tell him the truth.  She’s incapable of making a decision:

“Chase, what should I do?” I began to search his face for answers, but he looked so pained I had to stare at my hands instead.

“I can’t answer that for you Princess. No one can.” After a few minutes of intense silence he continued hesitantly, “Who do you want?”

“I don’t know!” I blurted out quickly, “I want you Chase, but I can’t hurt him. I won’t hurt him anymore than I have. I love him too much.”

So of course this means that she leaves Chase to return to Brandon even though he declares that he will “love you for the rest of your life.”    I have to admit Brandon’s pretty dumb. After all, he accepts that the gift of a ring from Chase is nothing, as Harper says.  Unfortunately for Harper, because she is so stupid, she gets pregnant because she refused to allow Chase to use a condom. She didn’t want him to and now she’s going to pay for it, right?  Nope. Breanna guesses and tells her parents who are THRILLED for Chase and Harper. Harper, however, cannot bring herself to tell Chase. She does tell Brandon because, well, she’ll be showing soon enough but takes the longest time to reveal this to Chase.  In fact, she doesn’t tell him. He essentially finds out himself but when he does, he is THRILLED.

I know right? If there was ever a time that a headdesk gif should be used, it should be RIGHT NOW but I will simply content myself with using all caps.

Harper is swept up into the bosom of the family.  Everything is great except Chase and Harper get into a huge argument over suggestive cell phone texts.  Chase runs off and dies in a car crash. Harper is devastated but no worries, kids, Brandon is there to soothe her battered soul and in less than two months after Chase’s death, Brandon is back as her boyfriend.  Chase’s family understands because it is a special situation. Chase’s mom even tells Harper that Harper shouldn’t “miss her chance” with Brandon not two months after Chase’s death.  And Brandon’s mom is just fine welcoming Harper back into the fold even though Harper cheated on Brandon and is having someone else’s baby.

There could not be more understanding parental units in the world.

The story wraps up with pregnancy scenes, make up scenes between Harper and her father, and then more pregnancy because Brandon and Harper finally have sex and she gets pregnant. Again.  She might be 19 by then, but I am not entirely sure.[/spoiler]

Originally I was going to give this book a D but after typing it all out, I felt that it put the F in WTF.  F