Notice: The whole review is really a summary of what the fuckedness so if you plan to read the book and don’t want to be spoiled, click away. 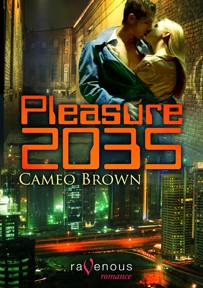 The basics of the worldbuilding that I could glean from the story is this.   There was a Great Fall and society split into Blacks and Blues.   Blacks were more technoliterate and Blues had more money.   There was a renewable energy source namd pilox that was the subject of much dissension between the Blues and Blacks.   There is a revolutionary group that no one knows about and there is the ability to infect someone with vampirism as well as the ability to cure it by creating a serum from a pregnant woman, although it destroys the fetus.

The story opens with our heroine (and I use this term very loosely as there is little heroic about these characters), Mayflower, in a three by six foot box designed for pleasure bots. Mayflower is pretending to be a pleasure synth. She is awaiting Klyper Corporation to pick her up and return her to her warehouse where she can return to someone named “Dime”. While she is waiting, the door of her unit opens and a man wrenches her out. He informs her that she will spread her thighs for him or they’ll both be dead.

Jovinius Markus Artinuous doesn’t buy Mayflower’s acting job and warns her “if you don’t do as I say when my clients get here, I’ll rip your fucking head off and shove it up your ass. Do you understand, Synthia?” There is no real explanation for why Mayflower is in this box designed for pleasure bots or why it is attached to Jove/Mark’s apartment. There is no real explanation for why Jove/Mark is a male prostitute/gigolo. Nor is there any real coherent worldbuilding. It is important that I lay out these precepts early on so that farther into the review when readers might ask “why”, they can answer their own query with “It’s RRTheatre”.

Mayflower is both excited and terrified by this assault. Her terror stems from her mistaken belief that Jove/Mark might be a synthbot. A synthbot is characterized by “his strength, his unusual good looks, his large cock, the freaky name, and his bad manners.” But Jove/Mark is not a synthbot. He is something else and when he kissed her jugular, her “pussy twitched” in response. She gives her tacit agreement to perform for these clients of Jove/Mark’s with the proviso that he not show them her “tits.” Mayflower, you see, has only one nipple.

Mayflower and Jove/Mark engage in sexual congress in front of Jove/Mark’s clients, the Dostens. Dostens are lithac traders. Lithac is a potent, addictive drug which apparently turns people into mindless children. Witness, for example, the behavior of drugged out Mrs. Dosten:

“I want you to lick her pussy, then fuck her “til she screams,” Janis blurted, ending her words with a giddy giggle.

Despite actually being at Jove/Mark’s place for watching and then having sex, Mr. Dosten is thoroughly disgusted with his wife and proceeds to slap her. This pushes Jove/Mark to get on with the show. He realizes that his instincts were correct when he smells her arousal.

She’d almost convinced him, but pussies don’t lie. They don’t cry either, unless they’re excited, and hers wept.

Pussy wept. Good thing that Mayflower responds to threats of violence and enjoys fucking strangers for voyeurs. Pussies aren’t the only thing that weeps. “Mr. Dosten’s erection dripped.” “His erection dripped down her thigh, eliciting a burst of her own woman’s cream.” “A burst of her woman’s cream spilled down her thighs…” “…come filling her and dripping between them onto the sheets.” “Mark erupted inside her, his come gushing down her thighs.” “…as more cream dripped from her swollen pussy.” “Mayflower’s body ached…her pussy dripped.”

Mark/Jove are so good together that Mr. Dosten cannot wait for his turn. This enrages Mark/Jove and he physically prevents Mr. Dosten from touching Mayflower. A scrap ensues wherein Mrs. Dosten jumps on Mark/Jove’s side and then he feels a “creamy liquid cascading down his side.” This description made me think that Mrs. Dosten may have leaked all over Mark/Jove. Someone on twitter suggested that it was blood and that Mark/Jove may have had different colored blood. This was dispelled by a later passage that described his blood as “ruby”. Make of this what you will. (Screencap).

Mayflower saves the day by pushing the Dostens into the Synthbox and pressing “WASH” which essentially kills them. The only concern Mark/Jove has regarding this is the bodyguard of the Dostens. Mayflower whisks Mark/Jove away to her warehouse by calling an ambulance and then getting the ambulance to leave them at her warehouse. I know that this might raise questions but I’m telling you to refer to previous paragraph in which I explained that there is no explanation for many of these things.

Mayflower has to give a blowjob and have sex with someone she has watch over her friend “Dime” who is called “Dime” because “Well, they used to joke about how Dime’s thoughts were worth at least nine cents more, hence his name.” Dime is a mentally challenged young man whose dialogue consists of “”Maaaaaaaaaafloooooooooooer,” Dime screamed in one of his random outbursts”. Don’t feel bad for him though because Dime gets to have sex and Mayflower even peeks at his sexual activities with maternal pride. Mark/Jove can tell that Mayflower is just faking her orgasm with this other person because she isn’t using her nails to scratch her john like she did when Mark/Jove and she were having sex.

Mayflower and Mark/Jove eventually go to a revolutionary camp. The revolutionaries are gearing up for a battle to bring peace between the two warring factions of Blues and Blacks. “He recognized Rocky, Melanchor, and Selena, leaders of the hard-fought revolution that no one seemed to know existed.” INORITE? A revolution that is so ineffective no one knows it exists? It gets better. When Rocky, Melanchor, Selena go off to battle, they return after three hours because a peace accord had already been worked out between the Blues and the Blacks. The revolution was for naught. !!!!! !!!!!

The book ends with Mayflower revealing that her left nipple was excised “per policy” when she was attacked and left for dead. The nipple stores all the information from her attack. Mayflower put her nipple in a necklace which she then gave to Dime. Yes, she gave her nipple in a “smooth silver box with rounded edges” to Dime to wear around his neck. Fortunately, they were able to reattach her nipple and all her memories were restored. This leads Mayflower to realize that her death was setup by her sister and exhusband. She returns to the Blue side to confront her sister, have sex with her ex-husband so that she could capture his DNA, and obtain revenge. Yes, hair or saliva samples aren’t sufficient, only sperm in one’s box can achieve perfect identification.

There is so much I left out in this review like the fact that Mark/Jove is a “Return”, a vampire cured of his vampirism but I leave you with my favorite line of the book:

She could tell the real man in front of her wanted her, because he told her so. “I want you,” he whispered (Screencap)

You can purchase this book at Ravenous Romance.