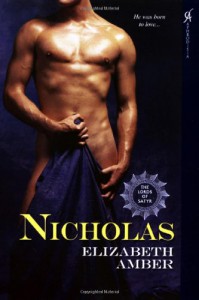 Once upon a time, my so called friend, Sarah, sent me a book to read. She had told me some bare details about it that raised my eyebrows and I started to read it when I received the book but it wasn’t intriguing enough to continue so I put it aside. But, it was laying on the top of the TBR pile, taunting me so last Friday I picked it up.

Nicholas is an Italian lord and vineyard owner who happens to be one of the three Satyrs that live in EarthWorld as opposed to ElseWorld. ElseWorld is where Satyrs, Faeries and who knows else frolic and fight. In EarthWorld, there appear to be humans, human-blends and Satyrs. Nicholas receives a note from the King of the Faeries that he, the King, had impregnated and begat three girls. Their Faerie blood is now starting to quicken and Nicholas and his two brothers must seek out these girls, marry them and continue the Satyr line. Nicholas, Lyon, and Raine divvy the girls up by geography. Nicholas’ chosen one is in Rome and off he hies to find her.

Find her he does and makes an offer to her degenerate family and she’s bundled off as his wife as quick as can be. Once on Satyr land, she is taken by Nicholas on a regular basis for as a Satyr, he cannot be without copulation for any significant period of time. Nicholas was taught by his father that there are two kinds of women: the Madonna and the Whore. You marry the Madonna, you fuck the whore. And because the wife is a precious piece of property, you don’t attempt to seduce her or pleasure her in anyway. Instead, you shove up her nightgown, stick a finger up her vagina like a “thermometer”, add some cream, and do her. “A fingertip pricked and then delved inside as though a thermometer intent on taking her temperature.” If she doesn’t like it, well, she’s the wife. Not supposed to.

I’ve long bemoaned the use of villain sex to show the reader how truly putrid a villain is. In this case, not only is it used, but it is overused. Not only does the evil aunt have sex with her stepbrother, but she does so calling him brother to emphasize the incestual nature of it. (Why they weren’t blood related makes no sense to me). Not only does the evil aunt have incestuous sex, but she comes to his bed after having with someone else to deliver this line: “She intentionally didn’t wash before joining her stepbrother. . . . Come inside me, brother . . . feel the welcome of another man’s cream”.

What’s this about magical dildoes you say? Well, the hero has a great collection of them. One prized example is an old magical beast whose magic is still alive in the wang because it vibrates. Oh, and the only way you get a magical vibrating wang is to wait for the ancient beast to die of natural causes. I know you readers think I am making this up, but I promise you that it’s all true.

Part of me wondered if this was written by a man, no matter what the biography states. After all, so much of the book read like male wish fulfillment. Nicholas is a shapeshifter of sorts. Once a month he has the Calling wherein a second penis springs from his pelvis. During the night of the Calling, Nicholas is wracked with lust. Fortunately, he and his brothers can summon women out of mist, called Shimmerskins. These women are animated blow up dolls. Nicholas even has one that he can summon from a mirror in his bedroom. But sometimes misty women are not enough and Nicholas has to seek succor from brothels. Usually he needs two women at time, even when he only has one dick. For his wife, though, he enjoys carnal relations only with the help of first cream and then drugs.

Jane, of course, is a half blood Faerie which is why Nicholas seeks her out in the first place. She knows she’s different (although the reader doesn’t really KNOW until later in the book but at least she doesn’t have a second shape or different appendages, those all belong to Nick). She’s afraid that her differences will disgust Nick and that she’ll lose her home and possibly a home for her sister Emma. One of Jane’s abilities is to heal the land and make things grow. Convenient that she is now a vineyard owner’s wife, particularly when the vineyard owner’s life depends upon the health of the vines.

Startled, she cried out, trying to sit up and scoot away. “Something is–”ahh!”

An unidentified serpentine instrument had unfurled from below his scrotum to tickle its way inside her anus! She wiggled her buttocks in confused delight as more of the tonguelike protrusion made its way into her rear entrance.

Again, not making this up. Confused delight? How about Terrified Horror at the fact a snake is protruding from her husband’s sac and crawling up her asshole?

In her drugged state, Jane enjoys Nick’s changes. “A matted, downy fur now covered his haunches and calves. He was as furred as an animal.”

The prose is purple, the storyline is flat with little movement. There is no character arc. There is no connection between the characters. If this is a love story, my copy was missing those pages that described it. If it was a hot and sexy read, then I’m going to have to become an inspirational reader. I debated not finishing it because it was so boring at one point. I fell asleep after reading about the magical dildos and then when I did soldier on I was treated to the horrible rape scene (which was depicted as almost some kind of strange normalcy because the heroine is not affected in any way and does not even address it after it happens) and the Sharing scene (where the heroine is drugged, yet again, so that her brothers in law can make her “safe” by sharing their “brotherly semen” with her). I wished I had left the book in the middle. I would have been less scarred. F.