Jane sent me a copy of your debut novel, “Mr. Churchill’s Secretary” after picking it up at the BEA Convention. If she hadn’t, I probably wouldn’t have heard about it for a while. After I finish this review enumerating all the things I didn’t like about it, you might wish I hadn’t. 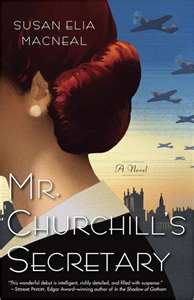 I love books utilizing historical settings and WWII has become one of my favorites. So I’m thinking “WWII, in London, a character who works with Winston Churchill during the darkest hours of the early war, espionage, spies, danger – what’s not to love?” I enjoy learning historical tidbits but I don’t enjoy history lessons and so much of what’s here seems like it could be dropped straight into a text book. It felt like a lecture and a boring one at that. Lots of other little details are clunked into the narrative – sometimes for a purpose but often it seemed like “wow, look at the research I did. Isn’t this cool? Look, I’m including this for color. See the color?” Why did we have to know about the setup of the ballet where one of the secondary characters dances? What damn difference did it make to the story? None. Now let’s tour the rooms once used by Wallis Simpson. Why? Who knows? There is way too much of this information awkwardly stuffed into the story.

Then there are all the characters. Some play major roles and readers need to know about them. Some are there for reasons I never grasped. The twins who live in Maggie’s house annoy the other flat mates. They annoyed me too. I also didn’t need to be reminded of how much they kept annoying people. Once an author has introduced someone’s characteristics, I assume that character stays the same unless I’m told or see otherwise. Another character is Gay. Hints are dropped early on but suddenly, out of the blue late in the book, he and Maggie start having a conversation about it at a point where it makes no sense. The book is also filled with exposition. Characters tell each other things that the other character ought to already know. Used sparingly, this is okay. Used a lot, it’s an obvious literary tool.

The final sections of the book are riddled with coincidences. This is often a issue when authors weave their fictional characters into the background of actual historical events. I’ll accept this to a point, else the whole framework of the plot collapses, but brilliant Maggie is on hand to save the day, by noticing hidden codes – and working them out – and being the one who guesses how a bomb is put together, way too many times. My credulity was stretched like taffy. I also found myself yawning and skimming. A book which is supposed to be a taut thriller is not one where I should find myself thinking, “I’m bored.”

Finally there’s Maggie herself. She’s brilliant, she’s frustrated with the current restrictions in place for women and it seemed to me that at almost timed intervals she’d explode into an impassioned speech about it much like an opera singer bursts into an aria. Maggie also frequently genuflects to British history and gets goose pimply with emotion about how moved she is to be in England. I almost expected her to begin belting out verses from “Jerusalem,” “Rule Britannia,” or “I Vow to Thee My Country.”

Too many characters, many of whom are just rough sketches, historical detail that is superfluous and/or badly inserted into the narrative, too many coincidences, clunky writing and a plot that gets out of control and over the top as the little coterie of brave civilians saves London in the nick of time end up ruining this for me. It’s a book I was looking forward to and wanted to like but – after skimming my way through the final 1/3 – ultimately didn’t. F