REVIEW: Lust in the Library by Amelia Fayer

I am not certain what the intended audience for this two story collection is. I doubt that it is romance readers as there is no romance.  I don’t know that it is for erotica readers because there is nothing in it that involves character development or discovery through the sexual acts.  My categorization would be boring stroke fiction. 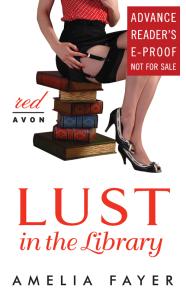 “Necking in Nonfiction” features a pairing between Sara and William Hammond, a visiting scholar from Oxford.

The initial scene has Sara being told to pursue Hammond by her co worker and Hammond internally agonizing how Sara never gives him the time of day. The next scene has Sara hunting Hammond down in the stacks and in the very next moment, without any transition, William is laying a big wet one on her and then the two are going at it with Sara’s hand down his pants and William disrobing her. When Sara uses her nails to clutch William closer, he replies “So you want to play that way.” Right, because using your nails is always a sign of (well, nothing in this case as William simply kisses her and moves the sex scene along in a fairly normal way). Just in case you were wondering, though, Sara acknowledges that the heavy petting in the stacks is “unlibrarian.” You hear that librarians, there are things out there that are unlibrarian and these included everything in the second scene of “Necking in Nonfiction.” Check it out if your library handbook doesn’t have these regulations.

When William asks her out, Sara decides that she doesn’t go out with sexy Englishmen who have been loitering around the library, waiting for the opportunity to get to know her better. Perhaps that was unlibrarian too. In order to convince her, William does the lizard lick, as I like to call it, where he licks her between her fingers. This melts her knees and off they go to do more unlibrarian things in the library. Sara won’t go out to dinner, but she’ll screw him in the library! And when I say she won’t go out to dinner, I mean Sara is really adamant about not leaving the library with William. Maybe Sara is a secret agoraphobic? Maybe if she leaves the library, she loses her life source and the farther away she gets, the weaker she becomes until she turns into a ravening wraith that haunts little kids on the street. WHO KNOWS. But dinner is just not part of the ticket for Sara.

Honestly, though, I’m not sure why she is even a librarian because she says the most stupid things ever like “I do lie him, but if he likes me why has he been, repeatedly, trying to get me naked?” Not to mention those two dinner invitations. What could those possibly mean? My lord, it is so baffling and confusing.

But thankfully William is there to try to get her naked again. Behind the circulation desk. More sexual exploits take place even though Sara believes that William cannot possibly like her. That is the entire plot arc. That Sara’s repeated sexual encounters with William means that he does not like her. And she never leaves the library. Are there librarian vampires fed only by the dust of old books?

“Fornicating in Fiction” tells the sexual hijinks of Veronica and Andrew. The two had a something and then Andrew hooked up with Veronica’s roommate. Veronica appears to be a work study student but she has an office in the library with a window. Everyone, which is comprised of Sara and Andrew, just don’t understand why Veronica is upset with Andrew. “He could not understand why Veronica was being quite so stupid. He was here, not with Angelica, so couldn’t she deduce that he was more interested in her?” Those shitty emotional women, taking every hookup serious. He’s done hooking up with the roommate and he’s back to wanting Veronica. Dear Veronica, get with the program and stop being such an uptight wench. And it was Veronica’s fault anyway. “Besides none of this would have happened if Veronica hadn’t blown him off.” This allowed Andrew to be alone and vulnerable to Ange’s wiles. “Veronica had picked just the right time to show up and behave in typical girl fashion and totally lose her shit.”

Andrew manages to corner Veronica and kiss her but she pushes him away, the stupid git. Thus Andrew is left having to jack off in the stacks looking at La Grade Odalisque. He imagines Veronica the way he liked her “sweet, a little bit shy, and sexy as hell.” And quiet because Andrew was fed up with the angry talking Veronica. “This Veronica, though, would be quiet for now, since Andrew having gotten enough angry talk out of the real one.” (I typed this in exactly so its not only awkward in its syntax but also misogynistic. Totally bonus).

Veronica and Andrew finally make out, resolve a misunderstanding, and live happily ever after. The end.

As with all terribly written books, the best thing about this collection is that it is short, under 100 pages. Huzzah for something. F

PS I guess I exaggerated a little bit about Sara. She actually leaves the library for breakfast. I guess some libraries are open 24 hours. Like a Dennys.