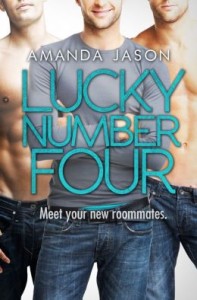 I don’t really know how to grade this. It’s clearly the wishiest wish fulfullment type of story and so I understand why it is appealing. It contains possibly the most Mary Sue character I’ve ever read. The heroine is a young woman who finds herself in need of an apartment because her two roommates just got married and are having headboard banging, wall rattling sex every night. She answers an ad and finds herself at the poshest warehouse loft ever. (If my review is filled with superlatives as it relates to the story it is merely a reflection of the presentation of the writing itself because one supermodel hot after the heroine is not sufficient).

Inside are three male supermodels in need of a roommate. Pandora Ann Phillips runs off because she isn’t model roommate material. The three pursue her. Not only do they pursue her but by bribing her roommates into moving into another posh warehouse loft, Dora is left homeless so she is forced (eye roll) to move in with the three models.

Pandora spends the entire book telling herself she’s not good enough for these three models and so she spends the book running away from them and they are constantly pursuing her. All three of them. The three models follow her everywhere. To her job, where she is studying, to her parents’ house and even when she is jogging. It’s as if the three of them are just one person which I thought might actually happen at one point because this is supposed to have a paranormal aspect.

But alas, no, the paranormal aspect is that Dora is an empath but given she couldn’t read the emotions of anyone around her, I’m not sure why this was even included. Her mother as a psychic was also a lame attempt at something although I wasn’t sure what. All she did was give vague messages to Dora that someone (and unfortunately it was neither Backpack or Map) had a warning for her.

I guess the subterfuge was necessary because the suspense of the story is determining which guy loves her and who Pandora loves back.  At the end of every chapter there is a one paragraph snippet from one of the three that love her. These…these were so awful.

She forgave us. How can she not see how beautiful she is? I couldn’t take my eyes off her, and I have no idea what movie we watched. I finally told the others of my feelings, and they told me if I hurt her, I’ll regret it. They assume she’ll want to go out with me, but I’m not so sure. I think she still feels we’re these carefree, jet-setting guys who don’t really feel. Boy, is she wrong. God, I sound like a woman. Now to get up the nerve to approach her. Maybe I’ll wait until her exams are over. Yeah, if I can wait that long. Those lips are calling me again …

There’s a pregnancy, unrequited love, and tragic accidents. The males that she lives with have one distinguishable feature–they are models.  It’s how she constantly refers to them as which makes me believe that she could be living with three Fatheads and she’d have the same reaction to them.

I finished the book so I could review it and some crazy what the fuck did I just read happens at the end. I don’t really know why this is on the Amazon bestseller list other than it is 99c. But it took me almost a week to read it. As one goodreads reviewer put it, this was the longest short book ever. F

→ Jane
Previous article: REVIEW: It’s All Geek to Me by J.L. Merrow
Next Post: Daily Deals: Something for everyone (contemp, PNR, historical, mystery)