REVIEW: Love Worth Biting For by Roxy Mews 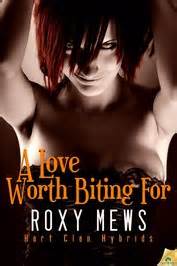 Firstly, thank you for sharing your vision with readers.  You bring a very unique, if somewhat unbalanced take on paranormal romance to the table with the origin story of the Hart Clan.  Amber Paulson is a made werewolf used to living and loving on her own terms.  As the daughter of the Pack Alpha, she’s expected to toe the line and follow tradition.  Fate has other ideas in the form of one Jake Myers and his family of vampires.  Rather predictably, this Romeo and Juliet fall in love, becoming mates – and then must face the consequences of their union.

Unfortunately, the attempt at selling me on just about any part of the story failed miserably.  If you were trying to do a fanfic parody mashup of the Twilight and the 50 Shades of Grey franchises, this might have worked.  Maybe.  The plot is, perhaps, the strongest and most interesting part of the novella – and even that is very weak.  It’s a standard, boilerplate boy-meets-girl, they screw, trouble ensues storyline that occasionally requires belief to be suspended like a piñata and beaten to death with a baseball bat.  There’s a bit of a “coming of age” story for Amber – even though both she and Jake are older and passing as college students.  It’s interesting to watch how she changes through the story from a seemingly young woman with no responsibilities to someone a bit more mature – if you don’t stop to consider things too hard.  Overall, the plotline reminded me a little of something soft-core found on very late night cable.

Amber is over fifty years old and acts like she’s no more than a very young twenty.  In fact, I’m convinced Amber needed to be kept away from freezers and ice, lest she become a true frosted flake.  She’s presented, repeatedly, as a strong, confident woman who’s certain of herself, self-assured.  Until she meets Jake.  When she meets him, every bit of self-assurance and intelligence leaks right out of her nether regions in a flood of must-be-dominated female sexuality.  She goes from confident to greeting the world with her legs hooked behind her ears in the span of just a few pages.  While I understand this is erotica and the sexy bits need to be there, I feel like Amber’s “self” was sacrificed on the altar of sexual caricature.  What had the potential to be steamy erotic passages came off as lukewarm, at best – laughable at worst.  Phrases were used that jerked me right out of the story, trying to figure out if what was written was really what was meant.  I’m sorry, but the mental image of Amber’s clitoris standing up and singing at Jake’s attention does little to evoke sexy mental images.  All I could think of was the national anthem blaring from between her legs.

Let’s not mention the inescapable magical mystery mating pheromones that forced our protagonists together.

Jake is another problem with the story.  With most of the focus on Amber, since the story is told in her voice, Jake comes across as a very one-dimensional silicone prop.  He has all of the characterization of a “real doll” sex toy.  He exists solely to dominate her – in and out of bed.  His affect is completely flat.  Admittedly, given that he’s an old vampire, that may have been the intent, I’m not certain.  More attention to detail and characterization was given to Mary, Amber’s best friend.  Her personality, and her dialog with Amber, was much more believable than anything that passed between Amber and Jake.  He’s not even a foil for her personality.  He’s simply a means to a somewhat predictable and poorly executed end.

On the whole, the story lacked cohesiveness, credibility and subtlety.  There was absolutely no finesse to the plot or the characterization.  It put me in mind of a literary paint-by-numbers kit.  While the premise of the story held potential, it’s been done in the past by enough authors that anything new to the field is going to have to be something special or have a new twist in order to make an impact.  F