Dear Mr. Cohen,
I should have known that picking up a sports book would not have yielded the best results from me.   You must understand that someone who has no real interest in them or the sporting culture will find a book that is over 400 pages and all about this rather ‘meh’ culture (in my opinion) hard to get into.   I got a copy for review and had to say it sounded interesting enough to potentially push past things.   Steroids?   Scandal?   The reader in me was intrigued. 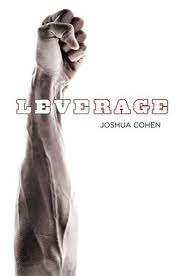 Curiosity killed the unprepared reader in this case.   It really did.   I came in expecting realism and got it, but it came with an incredible price on my emotional stability while reading it.   There is no denying that this book is good, at least in terms of what we often say a good book is made up of.   The prose is believable, the sports are pictured from someone who knows what they are talking about, and the book itself nets a hefty emotional reaction from the reader.

So why did the book make me want to vomit and throw it across the room?

Be warned, readers, for spoilers will follow following the plot summary

Danny is a skilled high school gymnast whose passion lies in the high bar.   The chalk on his fingers.   The feeling of his body twisting and turning in the air.   His athletic abilities are impressive for a sophomore, and that could mean a lot for him.   Winning a scholarship for gymnastics is his biggest goal.

This sporting year also includes a new student by the name of Kyle.   Kyle joins a different sector of the athletic world:   football.   He’s big and broad.   Just the type to be able to crush the competition on the football field.   Recruiting him was a no-brainer to ensure that Anooka High would have one hell of a football season.

Despite being on opposing ends of the sport world, Danny and Kyle strike up an uneasy friendship.     Danny feels alienated from his father now that his mother has been dead for several years.   Kyle feels alienated as well, but for different reasons.   Up until recently, Kyle had been living in a group home.   Now he’s living with a woman who smokes, drinks, and generally leaves him alone.

What haunts Kyle most of all – in the form of a speech inhibiting stutter – is the things that were done to him in that wayward house for teens.   He thinks that he’s escaped it all, until another house member finds him in Anooka…and he and Danny witness a horrific event that brings up all of the horrible feelings again.

Your characters were a success for the most part.   I say this with respect, because normally I don’t care much for sporty characters.   Danny got on my nerves at times with how he acted towards the general popularity issue with the football players versus the gymnasts and the cross-country people.   He was often very eager to just let things lie or go along with what the seniors were doing.   That kind of lemming action gets old when the character has enough sense to point out that the entire situation shouldn’t be going on to the extent that it does.

Kyle was more sympathetic.   Despite being the bigger and more stoic of the two, I liked him a lot more.   He has a gentleness about him that manages to be sweet without taking away from his masculinity.   His situation honestly just feels a lot more pressing and understandable.   Ignoring a difficult event is, to Kyle, a survival tactic so he doesn’t turn in on himself because of his mentally jarring past.

What made these characters – and pretty much the entire book – seem unlikable to me was the following scene that contains spoilers.

[spoiler]Following a gymnastics practice that Kyle sits in on (he wants to learn how to do a flip, which is very cute), a couple of football players come in and start bullying one of the freshman on the gymnastics team, as well as the senior/leader of the team.   These players are bullies and have also been partaking of steroids from Anooka’s football coach.   You can imagine how cruel they are.

They are so cruel, in fact, that they take this kid and they rape him.   They sodomize him with a broomstick and rape him.   Danny, at the time, was hiding near the mats.   He luckily didn’t get seen by the football players, but his friend (the senior) did.   He was tied up so he wouldn’t interfere with whatever the football players did.

Danny’s position is such that he can see the rape going on.   He watches all of it.   Luckily enough, Kyle forgot his cell phone and comes back for it.   Watching the act reminds him of his abuse at the group home and sends him into a blind rage.   He beats up his football teammates and then promptly loses himself.   Danny unties his friend and tries to help the freshman, who is startled and in shock.

My problem with this is one that still makes me angry.   This is after reading the book a month or so ago.   They explicitly say not to tell.   Danny and the team leader both tell this kid to just go home, get a shower, and act like it never happened.   No hospital trip.   No telling an adult.   Nothing.

There will obviously be people that say this is realistic, and to an extent I can agree.   I could see this happening to some people.   The fact that they never told an adult – and thus cause this character to commit suicide later in the novel – just didn’t work for me.   That told me that I would consider these characters (Danny more so than Kyle) lemmings who put themselves above other people.

I know this isn’t the case entirely, but the reader in me did not buy for one second that not telling anyone was a viable option.   Because it just isn’t.   Slapping a happytime ending on a story like this didn’t help, either.   It just reinforced the idea that the ending lesson was worth it.   The one place where redemption could have been found in the realism found throughout the rest of the book, such the anti-gay sentiments of the football players, the partying, and the cruelty, was ended instead by an ending that makes things seem okay.

No-no-no-no-no!   Screw teaching sports players a lesson about not letting the bullies get advantage of you.   Screw promoting friendship with the teams.   Why not, instead, show the guilt and the rawness that the rape creates?   You leave the reader with the intention of saying things are okay, when the resolution is in no way something you would wish for.

*Note the paragraph below has some particular plot spoilers in regards to the ending.*

I understand the temptation to make the book end with a football victory – but I find it very unlikely that a team would be able to play a game at all when 1.) several players are found to be using steroids 2.) several of those players admit to raping a kid who later committed suicide 3.) the coach doesn’t seem to care about 1 and 2 and 4.) the coach supplied the kids from 1 with steroids in the first place.

Granted, I know little to nothing about the rules and regulations of high school football.   It’s just a lot to shirk off in one go.   All of that is admitted, and the bad people just don’t get to play in the game?   And they still win and everyone is happy?   I couldn’t buy it.

There were a lot of little things that were less personal and more just general narrative problems.   The book is rather long at over 400 pages, and the violence is very excessive.   Not to say that it’s bad to have violence, because it’s real, but there’s a lot of it and I’m not one for oversaturation of that kind of thing in a book.   It feels like the author doesn’t understand that they have shown me many scenes of its kind already, and that it doesn’t really advance the plot.

Other than the lack of a strong storyline throughout those more tedious pages, this book is technically sound.   Two narrators of different voices and types come and in reveal a lot about themselves.   Guys – especially sports lovers – will be attracted by the masculine cover and topics.   The writing is solid.   Yet as a reader I cannot console the portion of my brain that wants to scream ‘NO’ with the one that can analyze the writing.