This book was recommended to me when I asked for Interracial Romance recommendations and I am bummed I can’t give it any better of a grade. Not only are there typos, grammatical errors, terrible formatting, misused words on virtually every other page*, but the story drags for 45%; there is no believable romance; and the “hero” is a crime boss who spends his time “not working” to maintain his criminal enterprise. 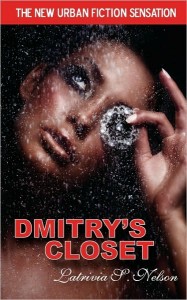 Royal is a foster child (who is sometimes refers to herself as being adopted and then switches back to being an orphaned foster kid) who was on her last dime before she walked into Mother Russia’s restaurant. There she is seen by Dmitry Medlov who, I guess, falls instantly in love with her. He hires her on the spot to become the manager of his newest jewel–Dmitry’s Closet. This will be an exclusive high end fashion store. Royal has no merchandising experience, is dressed poorly, and is not described as having any fashion sense. I guess she doesn’t need it because Dmitry has ordered all the stock and decorated the store. It needs only Royal to take control. I don’t understand why she isn’t given at least the appearance of being a fashion maven if her entire storyline depends upon her managing Dmitry’s Closet.

Dmitry immediately begins showering Royal with expensive jewelry (two carat diamond earrings) which she accepts without question. I could not tell by the text if Royal believed that Dmitry was courting her or whether she just thought it was her due as manager of the store. It was bizarre.

Royal is a virgin and has guarded her virginity like a prize. “Her entire life people had looked at her like something was wrong with her, jealous that they had given theirs away and had chosen poorly.” Nice slut shaming there. She decides to give it up to Dmitry. I wasn’t sure why. Is it because he lavished jewels and expensive clothing on her? Because he gave her a job she was clearly not qualified for? I didn’t understand, and wasn’t shown in the text, exactly why the two were in love with each other; why Dmitry was the worthy one.

The first 45% of the book is the build up of Royal managing the store, the two becoming lovers, and Dmitry capping several people that may or may not pose a threat to his criminal empire. Royal is incredibly resistant to any suggestion that Dmitry’s money comes from criminal effort despite him recounting his tattoos that all sound like part of a mark of gang (i.e., the stars on his chest “means that I’m part of very elite organization” and the Madonna and crucifix are signs that he has mastered the art of thievery and another was “how I got out of prison as a young man“) and that her shop is infiltrated by a number of big Russian men all armed to the teeth.

The second half is more of a suspense as Dmitry’s crime organization comes under attack by a rival and by law enforcement. It’s grim and bloody and there are multiple deaths, rape, and cop killings. Royal becomes frustrated with Dmitry’s refusal to tell her all his secrets and Dmitry tries to keep his mob life from spilling over onto the fantasy life he’s created with Royal. The second half moves faster than the first and is mildly more interesting but still riddled with errors.

There were regular consistency problems such as Dmitry’s disappearing and reappearing grasp of the English language. Dmitry sometimes speaks in Russian and sometimes his English is stilted (or maybe it’s just another example of poor grammar) but most of the time he sounds like he is American using American idioms. “This is polite way to tell me not to quit day job, da?” versus “all the money in the world couldn’t by a lick of class.” Maybe Russian idioms are the same as English ones.

In another scene, Royal is walking across her store and “her heels clicked on the ground as she did so” but then a page later in the same scene she is “shaking in her flip flops.”

There were a few positives in the story. First, because of the exhaustive descriptions you did get a real sense of place. Second, the romantic tension in the second half had promise but because Royal was so obtuse it was hard to believe in the conflict.

Even the blurb at the end seems to have an error:

“Royal hasn’t been the same since she was attacked three years ago. Where she used to be a sweet, innocent girl, she’s now the jaded, bitter mistress of the Medlov Chateau. However, a reality check is in store for the pre-Madonna …”

Is that supposed to be prima donna?

I could not, in good conscience, give this anything but an F.

*Example: “She followed carefully, feeling a little weary of where she was going.” or “He pealed out of his wet tuxedo and unbuttoned the top of his collar.”

→ Jane
Previous article: First Page: More Of You / Contemporary
Next Post: Daily Deals: A range of romances from 3.99 and under