SPOILER ALERT: THIS  REVIEW HAS ‘EM! 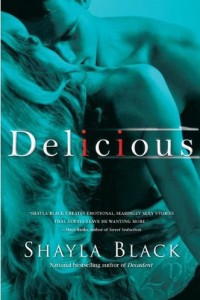 I will admit front and center that I never read  Decadent, but I definitely did read the reviews and comments on both this site and Smart Bitches Trashy Books. I was intrigued by the reviews and comments, similar to how one is intrigued watching the slow-motion replays of the crashes during the Women’s Olympic Downhill ski race. The hits just kept on coming. But for some reason, I never picked up the book, and after readingDelicious, I am very happy that I didn’t bother.

It took me  quite a while  to get through this book, not because there were big words or complicated plot twists, but because I had to keep collecting my jaw from the ground and re-reading to make sure I’d read what I thought I had. I laughed…I cried…I nearly barfed. I can’t say it was better than  CATS, but that’s probably because none of the  characters were weres.

Luc Traverson (cousin of Deke from  Decadent) spent an incredible, unforgettable night with Alyssa Deveraux,  but it’s a night he’s never going to repeat. Alyssa is a stripper and very unsuitable mother material, and Luc is looking to marry his mommy. Don’t believe me? Straight from the horse’s mouth:

A perfect wife. A perfect stay-at-home mother, just like his own. That's what he wanted.

Why, you ask, is Luc looking for this paragon of virtue? Well, Luc has some sperm issues, and his biological clock is  TICKING! He wants babies, and he wants ’em now, and he’ll do anything to get ’em, be it adoption, insemination…he didn’t go as far as stealing, but it sounded damn close. This guy has baby fever…lord knows why. Luc thinks Alyssa is totally unsuitable as a mother because she’s a stripper. And, in Luc’s vernacular, stripper also equates to stupid, sex-crazed, gold digging whore. Without asking, knowing or having any sort of proof, Luc assumes that all of Alyssa’s interactions with the male population involve her trading sex for just about everything.

So why is  Luc back in Alyssa’s neck of the woods? Well, remember that special night they spent together? As an exchange for sleeping with him and Deke (Deke chickened out at the last minute), Luc promised Alyssa he’d cook for her restaurant opening week.  One wonders why Luc thinks Alyssa uses sex as currency.

Alyssa knows deep in her bones that Luc is the man for her. Anyone that gives a rogering that amazing and sends you flowers days later, but won’t return phone calls,  is your one twew  wuve. Alyssa has Luc cooking  at her restaurant  for one whole week, so she has seven days and nights to  work her wiles on him. Oh, and she hasn’t had sex with anyone since she hooked up with Luc in  Decadent, and before  that  encounter was  celibate for 3 years.  I bet that re-virginized her.

Alyssa’s restaurant, Bonheur, is an  expensive,  upscale  endeavor that is blocks from her original business venture, the strip club Sexy Sirens.  I don’t find it strange that Alyssa would want to be the proprietor of a hip, upscale business venture and  shed her stripper image. However, it’s hard to do that  when you’re still stripping. You read that right. Alyssa owns Sexy Sirens (and apparently has for five years) but still strips at her own club to make ends meet…or something.  Oh, the humanity. Luckily, Alyssa’s bouncer (and giant, Goldberg-sized slab ‘o meat) is there to keep the riffraff away:

[…] Tyler lifted Alyssa, sat in her chair, and set her on his lap. His hand rested high on her thigh, the other on her waist. And the bouncer's fingers weren't still. They roamed, his thumb brushing the curve of her breast, his other palm disappearing under her skirt, over her hip.

Alyssa didn't blink, much less fight him off.

What? In addition to this,  Luc has caught  Tyler ogling Alyssa naked…in her  own home.  Alyssa’s reaction? Not much of a reaction at all, in fact they had a conversation as he helped her out of the tub. Hell, I’d assume the same as Luc; she’s fucking the bouncer.

Happily, the stripper prejudice goes both ways. Alyssa is the target of a crazed lunatic and is on the receiving end of threatening notes and  break-ins, in other words, the usual. Rather than doing things  to protect  her own well being, she’s TSTL (as are all the characters in this book) and  ducks away from  Tyler and Luc to check in at Sexy Sirens. She’s talking to an employee and there’s this:

Though it was hard to take someone seriously wearing a thong and pasties, Alyssa couldn’t discount the dancer’s observation.

Yep, you read that right. She just knocked her own employee for doing something she does on a regular basis. You may think I’m nit picking here, but I promise you, there is a gem on nearly every page of this book.  At this point, I’m sure  you realize that the back-and-forth  between Luc and Alyssa consists of  Luc hating that he wants  Alyssa  and punishing her for it, Alyssa wanting  Luc but hating that he doesn’t want her, respect her or seem to give a rat’s ass about her:

"What I really wanted to hear was that you believed I didn't have sex with Tyler today."

It was probably pointless, but she couldn't stand him thinking she was the kind of woman who slept around.

He paused, seemingly lost in his thoughts, sorting through them. "You're too dedicated to your future to fuck away the afternoon the day

your happiness opens its doors."

Tears hit her instantly. He got it. He got her! It was a start.

Trust me, for much of the book, we don’t get beyond “start”. Luc’s jealous of any interaction she has with any other man, and backs it up with his crazy assertion that  <sarcasm> relationships  are difficult and  take work </sarcasm>.

No matter what route he took to fatherhood, he couldn't achieve it without a woman in the picture. Even if Alyssa supported his decision to adopt or undergo surgery or visit a sperm bank, she'd have to agree to go through the process with him, perhaps carry a child. And they'd have to find a way to make their passionate, difficult relationship work.

What kind of mother would she be? Certainly not like his own.

I nearly cried when I read the above, and this is the point the wheels fell off the bus for me. There are so many things wrong with it that I think any commentary would send me into rantsville, and I don’t want to go there.  In addition to all of the relationship angst, sexxoring and fighting,  there’s  a  buttload of  non-communication, miscommunication, intentional miscommunication,  oversharing (by secondary characters)  and an annoying background threat to Alyssa’s well-being that could be resolved/avoided if she’d just discuss her past with someone…anyone. This book is written in all seriousness, but the characters, plot and dialogue  are so unbelievable that I kept thinking my brain was going to spontaneously combust from the  absurdity. F.