REVIEW: Copping to It and Cop Appeal by Ava Meyers

Your two self published books were recommended to me as examples of how the new romance author is taking advantage of the self publishing system. My understanding is that these two books are selling quite well.   Indeed, Copping to It and Cop Appeal average near 4 stars or more at Amazon. The good thing is that these two books have good length for the price of $.99 and the covers look professional. The bad thing is that the plots were so ridiculous (if you could call them plots) that the sex became uninteresting to the point that I was slogging through each sex scene wondering when, if ever, it was going to end. 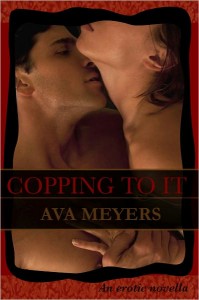 Copping to It features Claire Fullerton a “respected journalist” and undercover cop Ty Williamson.   I put “respected journalist” in scare quotes because there isn’t anything in the story that would give a reader the idea that Claire is a) a journalist or b) respected.     The story opens with Claire spying on a gang known as the Guardians.   She’s been staking out a warehouse for a couple of days attired in “patent leather flats”and slacks.

While she is supposed to be gathering material against this terrible gang that “every other cop in the city were trying to bring down”, Claire begins to get turned on.   She sees no crime except for the exchange of illicit drugs.   Instead, the gang members engage in pleasuring one woman after another.   Despite this place supposedly being a secret gang hideout and this gang being “city's biggest, baddest and most elusive gangs”, the warehouse has more traffic than the office of the bachelor preacher on Sunday afternoon. It’s a gang of pleasure, really, and who doesn’t want to be dragged amongst their midst?   Claire can’t even think of their criminal activities after she’s seen their tight white asses in action.   Every woman would feel this way, thinks Claire:

She told herself her response was to be expected.   That any woman would have trouble remembering a man's criminal history when she'd just observed him, naked ass clenching, pumping into a woman and making her come so hard her legs had buckled.

As soon as the man spewed his seed into the woman's mouth and she swallowed it, he'd officially be a member of the Demon Guardians.   A brother.   One of them.

This was Ty Williams' initiation into the state's most feared biker gang.

I guess the entire fraternity of Kappa Sigma are part of the “state’s most feared biker gang.” Seriously? Getting a chick to swallow instead of spit is the way to prove yourself to a bunch of violent, drug addled criminals?   Okay, they are drug addled so maybe this does make sense.   Fortunately, Claire knows that when Ty is spilling his seed inside the chick’s mouth, he’s fantazing about Claire.

She knew without a shadow of a doubt that when he’d closed his eyes and made the sound, he’d been feeling the pleasure given to him by another woman, but he’d been thinking of Claire.

All of this is supposed to seem romantic to us because this is what turns Claire on–“Voyeurism. Danger. Kink.”   And by positioning it in this fashion, the reader who disapproves is the “good girl” that Claire pretends to be but really isn’t.   Really what it says to me is that Claire would like to sit outside the prison trailer videotaping the conjugal visits of felons.

The story continues in this incredibly inauthentic fashion with Claire blowing Ty in front of everyone and Claire and Ty engaging in a private tryst in the gangster’s hideout as punishment for Claire and a furtherance of Ty’s initiation.   (cue Coolio’s Gangsta’s Paradise as the soundtrack to the video (video but no sound) that Claire and Ty make). They even manage to fit in a menage after another undercover cop informs Ty that it is safe for Claire, the superstar journalist, to leave the premises.   I’m not sure what the point of the attempted suspense plot was given that it was so obviously there to string a few sex scenes together. But as much as I thought this was ridiculous, it was no match for Cop Appeal. D. 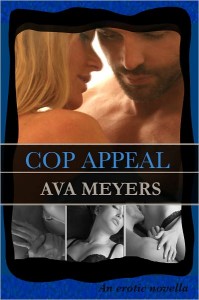 Cop Appeal doesn’t even have the thin veneer of respectability that Copping to It attempts to maintain.   Sarah Larson has always wanted Luke (the undercover cop in the preceding book who participated in the menage with Ty and Claire.   At the gangster’s hideaway) but she ends up married to his co-worker, Richard.   Richard turned out to be an abusive, violent husband.   Sarah runs from Richard and dreams of a new life with Luke but initially has to satisfy herself with a vibrator until Luke shows up at her apartment one day after the divorce. Despite the horrible things that Sarah said to him when she married Richard, Luke is ready to forgive, forget, and most importantly, fuck.   The two reacquaint themselves and then the detective to whom Sarah reported her ex husband (a co worker of said detective) calls to inform Sarah that the police have confronted the ex husband who denies everything.   Sarah is reassured that everyone believes her and not the co worker/police officer.

When the detective shows up on her doorstep the next morning, Luke greets him with a friendly acknowledgment and then the three engage in a menage.   Because she needs them both. Because Luke could tell by how Sarah talked on the phone with the detective that she wanted the detective.   So Luke is going to make sure that Sarah is protected from both sides (innuendo intended by me).   At this point, why not just admit that you are writing dirty menage in hopes to make the filthy lucre instead of trying to sell us readers on this idea that there really is an emotional reason for the menage?   Lord, I hope Sarah doesn’t make eyes with the butcher at the grocery store or maybe smile at the local barista.   Who knows who might await her when she comes home.   She’ll have to keep her smiles to herself and her eyes downcast lest these friendly overtures be viewed by Luke as a request for more menage.   F