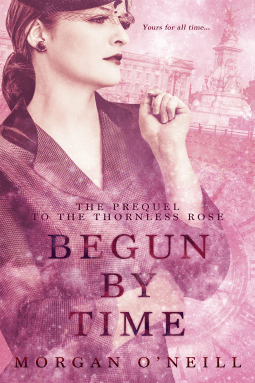 In the final days of World War II, Catherine Hastings meets the man she wants to marry. Flight surgeon Jonathan Brandon isn’t just handsome—he’s everything Catherine could hope for in her betrothed. But her dream of a happily ever after is shattered when Jonnie disappears shortly before their wedding…leaving Catherine bereft, broken-hearted, and with a lifetime of unanswered questions.

Arthur Howard is smitten with the lovely Catherine the moment he sees her. He’s certain he’s found the woman he wants to marry. Yet behind Catherine’s sparkling green eyes is a haunted look—the look of a woman who has known loss. But can he love a woman who still grieves the loss of her fiancé? Now Arthur wants answers about the man Catherine intended to marry.

Once upon a time, I used to devour time travel novels and still look for possible good ones. Given the World War II setting as well, I got all excited about this offering at netgalley. Unfortunately it soon bogged down for me and lost all its appeal.

The fact that the book is set towards the end of the European campaign is unusual. Soon it becomes apparent that our Catherine is practically perfect in every way. She’s beautiful, intelligent, sensitive, tactful, and becomingly shy. It’s odd but initially Catherine’s parents appear to be attached at the hip as they usually appear in scenes together. It’s also odd that Jonnie is called “Jonnie” but referenced as “Brandon” in scenes.

While the story starts with a sense of period with mention made of rations, the lack of stockings, bombed London streets this soon derails. Catherine seems to think her bridesmaids won’t have a hard time finding fabric – sorry, specifically rose colored fabric – for their dresses for her wedding. The seamstress doesn’t appear to have issues getting fabric as she arrives with lots of swatches for them to choose from. Rations anyone? Still going on for years after the war. Just saying.

I also quickly noticed the writing has a simplistic style. Except for food references. Those got described in exquisite detail. In addition, Jonnie and Catherine inform each other of what should be well known historical facts. Not quite as bad as “as you know, Bob” dialog but not far from it. Then a publican chimes in about the family business … ooh, then there’s the Cutty Sark description. Later on there’s faux Scottish brogue as well. At least the cairn terrier Jonnie buys for Catherine is cute.

Everything is like an old fashioned radio soap opera. It’s all very Heightened Emotions which swing from Delight and Happiness to Terror and Dismay! But I didn’t really feel engaged with any of it. It’s more that I know I’m just reading a book rather than feeling any of it. I keep expecting to hear the dramatic background synthesized organ music to tell me what I should be feeling.

I was at the half way point and having no problem just skimming. With all the hints and incidents at that point, I had a good idea what was happening and was, frankly, bored waiting for it to happen. When this occurs, my nitpicking increases.

Catherine is just the most perfect of perfection. Immediately captivating. Insta-love trails her like rainbow stardust in the eyes of the men who fall in love with her. Everything about her relationships – well except for when Jonnie dissolves into thin air – is a wonderment of exquisite happiness. Even during her first sexy time “the heavens sparked and thundered in an explosion of bliss.” We should all be so lucky.

I boggled at Cathy wandering alone the next morning through Arthur’s tasteful flat filled with “good furnishings” – even his bathroom has “elegant accoutrements.” And his razor is pricey! Why, he’ll shower her with all kinds of costly gifts. (Must be fun to mentally redecorate his flat, avariciously anticipate getting things then realize he sends his washing out, too. No need to worry about having to do that once she’s married!) Goodness me, she thinks his toothpaste is “rather good.” Did I need to know that?

There is too much telling instead of showing. And the telling can get tedious. Maddening detail about things which have no bearing on the story and only increase my frustration. Way too many excited adverbs and adjectives. Thanks for the bio on St. Etheldreda’s, info on the Blessing of the Throats, the plot of “The Bishop’s Wife” movie and the recap of Princess Elizabeth’s wedding. But what I really want to know is what happened to Jonnie. This is the one thing I didn’t get.

Catherine’s so special even the Royals show up for her wedding ceremony because Princess Elizabeth was so moved by watching Arthur propose to Catherine outside the gates of Buckingham Palace. Of course Elizabeth keeps in touch with Catherine, including personal notes and photographs of her adorable little children, Charles and Anne.

I will say that the way Jonnie communicates his whereabouts to Catherine is inventive but unfortunately I’m more annoyed by most of the rest of the book. Far too much telling of things which don’t matter and too little showing of anything that did. I won’t be reading on to discover Jonnie’s side of the story. F