REVIEW: All In by Raine Miller

The first book in this series (that ended in a cliffhanger) was a readable, if derivative, erotic romance. All In is told from Ethan Blackstone’s POV and he comes off as a whiney, angsty preteen boy. It was about as unsexy and embarrassing story as I’ve read in a long time.  Maybe Ethan is supposed to come off as a renaissance man, one who uses the term “bubbly” to refer to a bubble bath he enjoyed taking by himself or one who caresses his smartphone screen and moons over the heart emoticons Brynne sends him.  “I caressed the words on the screen, not wanting to close the message out.  She called me baby. She said she missed me.  She left me kisses and hearts. I tried not to read too much into it, but still it was hard not to.” 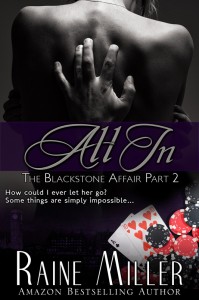 The joke is on me, though, because the plot or story here isn’t much different than in Naked. Ethan is trying to win back Brynne who left him at the end ofNaked because he had lied to her. Vowing to be honest with her, Ethan quickly regains control over Brynne, living with her, taking her old phone (and reading her text messages and listening to her voicemails) all under the pretext of keeping her safe.

If you have ever wondered what a creepy stalker boyfriend sounds like, Ethan is probably Exhibit A.  Brynne can barely go to the restroom without Ethan wondering if he will have to beat the shit out the toilet paper for touching her ass. At a gala for work, Brynne is networking and Ethan is thinking “She is mine, people! Mine! And don’t fucking forget it either.”

His constant mental possession of her was exhausting.  She can barely even mention another man’s name without Ethan going into fits of jealousy.

“I wonder where Ivan is.  Do you think he’ll be here soon?” Brynne asked me.

When she goes off for a photo shoot, Ethan can barely function. “ It was a thing of beauty, true, but I just didn’t want anyone else to see what was mine.”

The similarities with Sylvia Day’s series continues with Ethan suffering from night terrors and afraid to sleep with Brynne.  Both of them attending couple’s counseling.  Brynne is threatened by the release of a sex recording during which she was violated.  (All elements in the Day books).

The writing is often awkward.

“And your blessings in the Adonis department made it very easy for you with the ladies.”

I smiled at her.  The kind of smile I can feel on my face…

She arched back when I bit over a nipple.  Not hard, but enough to give her a little twinge and then a glorious moan when I soothed it with my tongue.

“Ethan, please—and yes, I can equivicobly say that I am in a relationship with Brynne.”

The book also takes a swipe at E.L. James 50 Shades which is either an inside joke between two British writers or an out and out dismissal. “I mean, who reads this crap? Who has time?  Why even read aboutsex in a book when you can have it instead? I don’t get that.  And billionaires in their twenties?”

Again, my opinion is likely to be the lone voice in the midst of the cacophony clamouring for more. After all, this book apparently sold 120,000 copies.  The story ends with danger escalating on all fronts against Ethan, Brynne, and Ethan’s aristocratic cousin (and clearly the hero of some future angsty series).  There are moments of entertainment and the sex scenes are decent, but most of the book was a fail for me.  Maybe an editor will smooth out the rough edges. Atria has picked this series up for publication.  F