When it comes to retro romance there’s “charmingly dated” and then there’s “should have been left buried.” This book, originally published in 1987, is of a time and place that I really did not enjoy visiting. 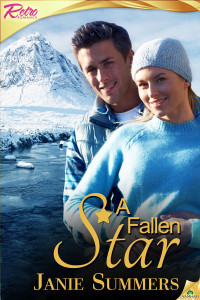 The story concerns Holly, a photographer still mourning the accidental death of her mountaineer husband. Her family persuades her to take a job as a “girl friday” at a center for outdoor sports in Scotland; her godfather tells the director, Torquil, that Holly is “lost like a fallen star. The life’s out of her.”  We don’t see much of Torquil’s point of view, but he apparently makes it his personal mission to fix her, which in classic style takes the form of sneering and criticizing at every opportunity, and forcing her back into mountain climbing when she’s not ready.

Torquil is one of the most crazy-making heroes ever: he sets Holly up to be shocked and upset, then tells her she’s overreacting, and then tells her, “You will care, Holly… Even if I have to teach you myself.” In other words, you will care about what he thinks you should care about.  Somehow while he’s playing his little mind games they fall in love, and she is magically cured of wanting anything other than what Torquil thinks she should want.

But astonishingly enough, that was not my biggest problem with this book. It started off in an annoyingly sexist vein, but since I often read old romances, I’m used to running into characters who talk about women’s libbers and girl fridays. (Though “lady instructress” was new.) Then we were introduced to a minor character named Dan, aka the Golliwog:

Golliwog was an apt description for Dan. Another sturdy Scotsman but with curly black hair that stood out from his head. Even his beard threatened to curl. Dan’s eyes went heavenwards for an instant, revealing the whites of his eyes, completing the golliwog image.

I was still in culture shock from that when we got to the Hogmanay costume party, which Dan attended as “an African native,” with “blackened face and torso.” Yes, you read that right — this book has a character in blackface.  After that, the introduction of a “half-caste” girl named Affreka barely shook me.  The Great Britain of 1987 was certainly very different, to put it as politely as I can.

I sincerely tried to find something of worth in this story, and I did enjoy the sections about Holly’s photography, and her growing ambition to start a new career as a children’s photographer. (Which all goes by the wayside at the end, as far as I can tell.) A heroine who climbs mountains to take photographs is cool, even if she (understandably) makes a rather poor job of it her first time back, and I thought it interesting that, unlike most current romances, this passes the Bechdel Test. But when I wasn’t finding the book offensive, I was finding it baffling. It seemed to be written in some kind of narrative shorthand that I just didn’t get, and there are numerous subplots taking up space that the primary romance desperately needs. I don’t know what was really going on with Holly, I don’t know what was really going on with Torquil, I have no idea when or why they fell in love.  The casual attitude towards grammar didn’t help; it was often hard to tell what was an editing error and what was just the colloquial style.

Even without the offensive elements, this book would not score high with me; it failed as a romance as well, and I honestly can’t recommend it at all. F.

→ Willaful
Previous article: What Janine is Reading in the First Half of 2013
Next Post: Tuesday News: 7″ Tablet Phone; Library For All Kickstarter; Failure; and New discovery engine