REVIEW: Beyond Reach by Karin Slaughter

Editorial note: This review/letter may contain spoilers. It is also not entirely a review but more of a diatribe. If you read this series, you may not want to read this post. Again, if you do read this and are spoiled, don’t blame us. We warned you. 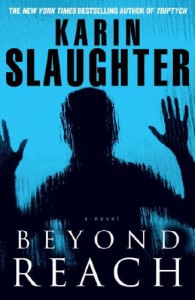 I have tried to rewrite this letter many times since I’ve read the book because I try to come off as a reasonable person and this letter is angry and bitter. After trying to rewrite it for the nth time, I’ve just decided to own the fact that this letter is angry, bitter, and even juvenile. I can’t help my emotional response and I am not going to apologize for it so that I can appear levelheaded.

I am an emotional reader. I invest emotionally with the characters, particularly those whom I have read over the course of many years. I recall buying each Grant County book in hardcover. I remember hotly anticipating each new mystery and each new development in the relationship of Jeffrey and Sara.

At the outset of the series, Sara begins to renew her relationship with her ex-husband, Jeffrey, whom she had divorced after she caught him cheating on her. When my friend, Keishon, urged me to read this series, I was quite reluctant. After reading Blindsighted, however, I was captivated; not only by your way of weaving a mystery and creating suspense, but at your deft characterizations.

Beyond Reach has a tightly plotted suspense story which primarily revolves around Lena, a former detective who worked for Jeffrey in Grant County. Trying to shake off her past, Lena accepts a police position in a different small Georgia town. Unfortunately, a series of deaths occur with the finger of responsibility pointing toward Lena. Jeffrey and Sara travel to Heartsdale to help Lena and extricate her from the mess. Once there they discovery racism and drug use driving the town into darkness.

Beyond the suspense is the continuing depressing and repetitive downward spiral of Lena. Her storyline has remained fairly constant from the beginning of the series. She’s angry and bitter (hey, maybe she read a book by an author she loved and then the author turned on her) and self destructive. She suffered a terrible tragedy and has never been able to escape from her own pain, striking out at those around her and associating with those who only deepen her psychosis.

Unfortunately, the story ends. It ends with a cheap trick to elicit a strong emotional reaction. In looking back, I see that I’ve been misled all along. You have often gone for the shock route to gain reaction from your characters. It was not enough for Lena to have struggled with her childhood and the violent death of her twin, but you took an emotionally unstable woman and had her suffer one of the worst torments. It shouldn’t surprise me that you chose the out that you did. It shouldn’t surprise me that in 6 books, Lena hasn’t grown or matured because she’s an easy stomach turner. It shouldn’t surprise me that you choose to take a course of action that will effectively ruin the future of the series for me because you wanted to have some kind of reader response. It seems to me that you are afraid to allow your characters to experience happiness. That prolonged happiness would somehow negatively impact your writing. The ironic thing is that for as much as you want to be remembered as a strong mystery/suspense author touching on important subjects such as how meth addictions ruin lives, I suspect that most will remember you for the ending of this book. That is what will stick in most readers’ heads for years.

I won’t ruin the ending, but I will say that I am sorry that I ever read you. That I spent over $100 in your career along with years of waiting and hours of reading. I am sorry that you have chosen your path. If this makes me a child who can’t handle the realities of life, so be it.

If I sound bitter, it is because I am. You expect this, I think, but hope that we readers will understand and stay with you. Not this reader. I’ve got too many authors to read. Too many books to try out to stay with an author whose belief that sufferance is of the greatest literary merit. B for the suspense and F for the rest of it.