What Janine is Reading (and Listening to) in Early Winter 2018

The Furthest Station by Ben Aaronovitch

This is the latest novella in the Rivers of London / Peter Grant series by Ben Aaronovitch, which I somehow missed when it first came out. The story begins with the sighting of ghosts on London’s trains. Nightingale and Peter enlist Peter’s teenage cousin Abigail to assist them in tracing the ghosts back to their point of origin, making use of interviews with those who encountered the ghosts, CCTV footage, and Toby, the magic-tinged dog. 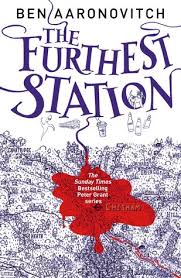 As usual I love the characters, the witty narration, and the historical and architectural details, as well as the nods to the casual racism that Peter, a biracial cop, encounters on his job. But this novella felt a bit too short, and the resolution to the central conflict was anticlimactic. It may be that Aaronovitch’s writing skills are more suited to the long form.

I also caught some annoying copyediting errors; Aaronovitch’s current American publisher isn’t as good at cleaning up his manuscripts as his previous one.

me and me and Abigail

“It would probably be easier if we waited for them to all parked up,”

He yawned, looked around at the grey dawn and give a resigned sigh before curling up and going back to sleep.

While she slept he turned himself into dog

Chess insisted on talking my hand

At first I ought it was a reflection

In a separate niches

I also question the new practice of inserting footnotes as “Notes for Reynolds” which are really explanations of various Briticisms for American readers. I found that all but one of them were unnecessary and explained things I was able to pick up from context, while other Briticisms I wondered about went unexplained.

The best part of this novella was Peter’s encounter with a baby genius loci. I also enjoyed the presence of Peter’s cousin Abigail in the story and the teensy bit we saw of Bev. Overall, I’d give this a B-/B.

I loved the narration in this audio book (almost as good as Rosamund Pike’s reading of P&P) and this story of a stubborn-if-wrongheaded young matchmaker who meets her own match was good, too; told with wit and elegance. 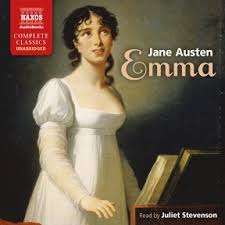 As my husband, who caught some of it, pointed out, there was perhaps an overabundance of annoying characters — the hypochondriac Mr. Woodhouse, the babbling Miss Bates, and full-of-herself Mrs. Elton.

(He also pointed out that Mr. Knightly’s having known Emma since she was a child was kind of creepy. I tried not to think too hard about that.)

I loved Mr. Knightly’s direct way of cutting through all the bull, though, and didn’t find Emma quite as irritating as I had been warned I would. I mean, she was at first, but that got better as the book went on, and by the end, I was rooting for her and Mr. Knightly.

The social satire in the novel was terrific, and the subplot about Frank Churchill went in a direction I did not anticipate at all. A-.

The Soul’s Expression by Amy Alston

Early in February, Ms. Alston submitted a review request to DA. Her historical romance takes place in Victorian England, and involves Katherine Forrester, a young, middle class wife so afraid of physical intimacy that she goes to see a doctor who specializes in “female hysteria.” 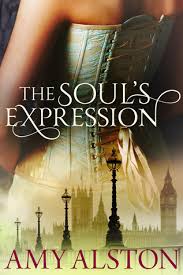 This premise was off-putting, but the attached writing sample was strong, so I downloaded a kindle sample from Amazon. The sample impressed me further, so I purchased the book. But at the 37% mark, I stopped reading and could not make myself continue.

As the book begins, Katherine has been married for almost eight months and has yet to consummate her marriage, so her mother-in-law insists on taking her to see Dr. David Hershaw. Katherine’s husband, Edward, was initially willing to wait, later impatient, and eventually angry. Lately, he has even begun an affair with their housemaid. But Edward is not entirely a one-dimensional villain. David discovers that he is addicted to laudanum, and the drug is affecting his behavior.

David’s offer to approach Edward’s doctor wins Katherine’s trust, and she begins to feel an attraction to her doctor. When Edward is away on a business trip, Katherine tells David that she is still unwilling to be touched by her husband, but willing to take some instruction from the doctor on how to touch herself—and to be touched by him in the process.

It was around this point that I stopped reading. I didn’t so much decide to put the book down, but rather, some part of me balked and literally could not continue. A doctor-patient romance proved to be a bridge too far, no matter how nuanced the characterization or elegant the writing. The novel’s strong focus on consent actually made my resistance more acute because the power differential in a doctor-patient relationship is so great (all the more so when the doctor is assisting with such personal issues) that I don’t see how consent is genuinely possible.

A note from Ms. Alston at the end of the book explains that she withdrew an earlier version of this novel in 2015 out of concern that she hadn’t “handled the sensitive issues of the book well enough.” In truth, I think the problem is with the premise rather than the handling. I hope Ms. Alston continues to write, because her voice is fresh, smooth, and engaging and it’s quite possible that I would enjoy another of her novels. DNF.

In late January, renowned novelist Ursula Le Guin passed away. Although Le Guin is best known for her SF and YA fantasy novels, she has written in other genres as well and this book, published in 2008, tells the story of Lavinia, a minor character in Virgil’s Aeneid. As I had already read several of Le Guin’s best known works, I decided to try Lavinia next. 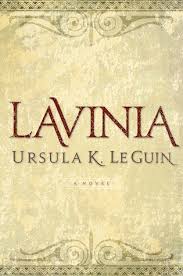 The book begins with Lavinia as a young girl, the daughter of the King of the Latins of Laurentum. Lavinia’s two brothers perish of childhood illness but she survives. But her mother is hard put to appreciate this and cannot get over the deaths of her sons.

As Lavinia gets a bit older, she has a vision of the dying Virgil, who reveals that she is to marry Aeneas, the subject of his epic poem. Eventually, Lavinia gets her father to agree not to marry her to any of the local kings, but her mother cannot accept this decision—she has a flirtatious nephew whom she strongly desires her daughter to marry.

I found this book worthwhile even without having read the Aeneid; the characters were all interesting people and Le Guin writes well. I really felt for Lavinia, caught as she was in the tug of war with her domineering mother, but I was a little frustrated that it took a good part of the book for Aeneas to appear in Lavinia’s father’s kingdom.

Shortly after he does so, Lavinia’s mother complicates matters further. Here I began to fear that there might be tragedy, or at least sorrow, in store for Lavinia. It was certainly foreshadowed. I realized I wasn’t in the mood to read something with a sad trajectory, so I’ve put the book down, for now. I may pick it up and finish it at another time.