REVIEW: Threesomes (Menage a Trois) or how to increase traffic to your new blog

In the last week, I have read a series of threesome books. Ellora’s Cave has them so nicely grouped for me and based on a couple of other reader recommendations, I read 6 (3 in one anthology) before I was menage a trois-ed out. When I picked them out to read, some were from a purchase made months ago. So long ago that maybe I could have qualified for AngieW’s TBR April Challenge. I also tried to stay away from any that looked marginally incestual (read Lora Leigh’s Men of August series. I read one and was squicked out by it. The whole series read like the diary of a sexual predator: I have to have pain inflicted during sex because I was tortured as a child. In order for me to have true fulfillment, I must impale my bride in one orifice whilst my brother bones her in another. But I guess that is another letter for another day). I tried to read contemporary settings so I wasn’t getting interspecies and intergalatical threesomes (I was inadvertantly unsuccessful here). Without further delay:

1. Dear Ms. Byrd, author of Triple Play. Your story was fun but a little weird. This would be the story for those who love those boss/secretary plots but what a little, err, alot of spice to that theme. I think you are a pretty good author but I didn’t really like the spineless heroine who was preyed upon by her supervisors. C+

2. Dear Ms. Starr, author of Lady’s Choice. Your story was pretty campy and out there. Lija is out slumming in another region when she meets up with Jackson and Gehon, two Zelion warrior/space traders (I guess Han Solo and his partner if his partner wasn’t Chewbacca. Or maybe Han Solo and Luke S if Luke S wasn’t Leia’s twin brother). Immediately Jackson and Gehon know that Lija is both their “true” (read: soul mate). They are disturbed that one woman represents both their trues but they act together to kidnap her and convince her sexually that she belongs with one of them. Jackson is a great lover. Gehon is the romantic. Together they make one great husband. The end. This is not bad. One of the funnier things in the book is that Lija makes note of the differences in the two men’s penises. She uses this knowledge to good use later when someone tries to make her believe that the two men are cheating on her. B-

3. Dear Ms. LaFluer, author of And Best Friend Makes Three. I thought your story was the best of the bunch. It had fun with the genre while not taking itself too seriously and still made me believe in the romance between the main hero and heroine. Brenna and Eric are engaged to be married. They have been together for over a year and have fallen in love. Eric knows that Brenna is passionate and adventurous woman. When his best friend, Keith, comes to town for a visit, Eric decides to give Brenna an early wedding present – a threesome. Brenna and Eric stay passionately in love and this is just one episode in their sexual lives although, I suppose the story hinted at more polygamous sexual adventures. B 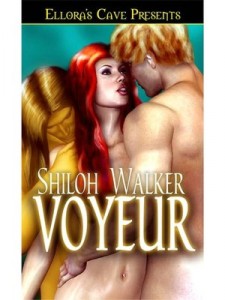 5. Dear Ms. Byrne, author of Stephanie’s Menage, your cover is very misleading. I thought it was a contemporary. Instead it is a weird and really unexplanable amalgamation of urban fantasy and fantasy. I suppose in a romantica the focus isn’t on the worldbuilding, but still. The two men are twin brothers. In their fantasy society, twin brothers always mate with one woman. This is another one troo love story. It also features a little political intrigue in that their mother is a cruel, evil bitch that they are going to overthrow. The way that they are going to do that is to find their mate and make her queen. These two guys are pretty silly to the point of almost being emasculated. They don’t realize what is really going on in their country and what their evil mother is doing. She tortures and kills people just for the fun of it. There is some strange evil spirit that is inhabiting her or helping her (I think some kind of succubus). The story ends with Stephanie and her menage but doesn’t at all address the evil queen. That was pretty disappointing. D

I think that erotic/romantica that exists solely for the purpose of the sex and has no real plot device can only be read in short spans. I am pretty much tired of sex scenes and toward the end of the stories would start skimming through. They really all started sounding the same. Those of you who presented some emotional connection between the characters were more readable to me and made me interested in reading other books of yours.

→ Jane
Previous article: REVIEW: The Hazards of Hunting a Duke by Julia London
Next Post: REVIEW: Menage a Magick by Lora Leigh