A friend recommended your lesbian paranormal romance to me when I asked for something new. Although I'm not a big fan of weres/shifters, I've enjoyed several of your earlier books (written as Radclyffe) and I consider myself an adventurous reader. I was eager to try the new pseudonym and new series.

Unfortunately, The Midnight Hunt didn't work for me. If I had to describe the story in one word, it would be overpowering. 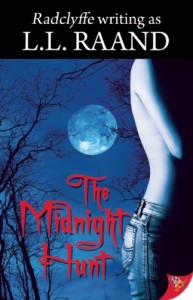 I've said before that I'm new to lesbian romance and some of the tropes are foreign to me. I've grown accustomed to one of the heroines being more androgynous or boyish. At times these characters are "too masculine" for my taste. Most of the cast of The Midnight Hunt fell into this category.

Sylvan Wir is the Alpha to end all Alphas. She's the head of her pack and the leader of the council of preternatural beings. She's like the president of the paranormal world. People nearly piss themselves when she walks by. In this story, vampires and weres are "out" in society, trying to gain acceptance. Sylvan is under a lot of pressure to convince politicians to pass a bill for equal rights. The parallels I saw between "unnatural" creatures and the gay community were interesting. You have an engaging writing style and the premise felt fresh to me.

After a difficult day at the office, Sylvan returns to her wolfpack compound, only to find that one of the "pups" has been injured. She shifts in a running leap and races to the hospital. When she arrives, snarling her demands for a special were-medic, she meets human ER doc Drake McKennan. Drake is fascinated by the paranormal patient and her protective Alpha. Sylvan growls and snaps and tends to the pup's wound by removing a poisonous piece of metal with her powerful claws.

The animalistic behavior seemed exaggerated and the world-building uneven. Sylvan shows up at the hospital in jeans and a shirt, her feet bare. She can shift into a clothed human, but shoes are beyond her scope? She's also reluctant to tell the human doctor any details about the pup's injury. The girl was stabbed with a silver-based blade, and according to Sylvan "only another Were would know that silver was lethal, even in very small doses." I thought it was common knowledge that werewolves are sensitive to silver. Silver bullets, at any rate.

I also thought Sylvan's characterization was weak. Weres are hypersexual beings, needing constant physical release. If they don't mate, or at least copulate, they can become violent and unstable. Despite the danger, Sylvan is reluctant to see to her own needs. She's unsatisfied with empty sexual encounters but refuses to take a mate. Why? Because her father was devastated by her mother's death. Sylvan decides she'd rather be alone forever than risk losing a partner.

The Alpha's sexual frustration is bad for the pack. Her needy scent can trigger a snarling hump-fest by sending all of the females into heat and causing dominant members to fight for mating rights. I had trouble believing that Sylvan would continue to deny herself release and jeopardize the safety of her pack. Her edgy stubbornness was not a strength or a sympathetic vulnerability.

For me, the most jarring aspect of The Midnight Hunt was its portrayal of werewolf female sexuality. There are frequent sex scenes and the clitoris is described in masculine terms. It acts like a penis. The were-clitoris becomes engorged, stiff, erect, rigid, hard, etc. It can be placed between a lover's buttocks, sucked deep into a mouth, or milked to release. Were-females also have a strip of fur down the center of their abdomen, six-pack abs, and olive-sized nodes on either side of their phallus-like clits. These sex glands ache, grow firm, and need to be drained.

Lora Leigh writes a werecat series in which the heroes have barbed penises, if I remember correctly. I’m okay with that. Enhanced clitorises, not so much.

I think I'll stick to your contemporaries.

Previous article: REVIEW: The Name of the Wind: The Kingkiller Chronicle, Day One by Patrick Rothfuss
Next Post: DABWAHA Time