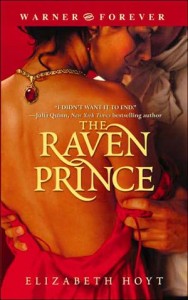 Many readers (including Jane and Jayne) have fallen in love with your debut, The Raven Prince. I wish I were one of them, but unhappily, I have to report that I closed the book feeling that the fan bus had left the bus terminal without me. As I sit here, figuratively waving to all those folks whose faces are plastered to the bus windows, wondering how to explain to them why I couldn’t get on board, the bus turns smaller and smaller, until it’s a dot on the horizon. I look around. Yup, I’m all by myself out here.

The Raven Prince takes place in eighteenth century England. It’s the story of Edward de Raaf, the temperamental Earl of Swartingham, and the widow Anna Wren, whom he nearly runs over with his horse one day. Shortly after that, Edward finds himself in need of a new secretary, and since he doesn’t give his steward, Mr. Hopple, much time to come up with one, Hopple hires Anna, a woman.

It doesn’t take long for a sexual attraction to emerge between Edward and Anna as they spend time together at luncheon and touring his estate. One day Anna discovers a bill from a house of ill repute called Aphrodite’s Grotto, and she realizes Edward is a customer there. Soon afterwards she (somewhat conveniently, I thought) finds an ailing prostitute lying in a ditch and takes her home to nurse.

Edward’s family died of smallpox when he was a child, and he lost his first wife in childbirth, so starting a new family is important to him. Anna is infertile and not of his class, so he feels he can’t marry her, and he goes to London to propose marriage to a young lady.

While in London, he plans to visit Aphrodite’s Grotto. He is not aware that Anna, thinking he has left the village to assuage his sexual desire for her with someone else, has, with the help Pearl and Coral, the prostitute and her demimondaine sister, come to the whorehouse wearing a mask, to be his lover for the night.

Almost from the very beginning, I had difficulty getting involved in this book. The biggest issue for me was probably how anachronistic it felt to me. In the first scene, after Edward departs, Anna says “Bastard!–? I didn’t think this word would be likely to be uttered by a respectable middle class woman in 1760 England.

Then, Hopple and Edward hired Anna as a secretary, at a time when only men were secretaries. I found this even more difficult to believe. The characters continued, it seemed to me, to behave and speak like twenty-first century people. For example, Anna goes on about Edward’s attractiveness to her mother-in-law. Later on she tells her friend that the earl isn’t likely to seduce her. Here’s a snippet from that conversation:

“Of course he won’t while you’re wearing that awful cap.–? Rebecca gestured with the teapot at the offending article of clothing. “I don’t know why you wear it. You’re not that old.–?

“Widows are supposed to wear caps.–? Anna touched the muslin cap self-consciously. “Besides, I don’t want him to seduce me.–?

She realized –” horribly–“that her mind had gone blank, and she couldn’t think of a single reason why she didn’t want the earl to seduce her.

I just couldn’t suspend disbelief that this conversation was taking place in 1760. There were other examples of speech that seemed contemporary to me. Edward says “Shit,–? in Anna’s presence. He also refers to another character as “that baboon.–? There’s mention of a “crackpot theory.–? Edward’s valet says to Anna, “Don’t have to be snotty.–?

It’s not just the characters’ behavior and speech that feels modern to me, but the narration and character thoughts also seem to me to use contemporary expressions. For example, Edward is described as having “demolished the food on his plate.–? Another time he thinks that something “had blown up in his face.–?

Understand, I’m not saying that these words themselves are actually anachronistic. They may in fact have been in use in 1760. But the expressions comprised of those words sound contemporary to me, and that was enough to pull me out of the story.

Another issue I had (and perhaps it was partly because of my distraction due to the reasons I mentioned above), is that I didn’t see much romantic love between Anna and Edward. Their initial attraction seemed largely physical to me. Anna speculates about Edward’s chest hair, and Edward wonders about the color of Anna’s nipples. There’s nothing wrong with good old fashioned lust but in this case, I found myself longing for that lust to be conveyed in a fresher way, and even more importantly, I also wanted to feel more of other emotions between Edward and Anna, too.

For two people who had been through the wringer (Anna with her infertility and her late husband’s cheating, Edward with all the loved ones he’d lost), these two did not seem to carry any truly deep wounds, and I didn’t feel the psychological angst I would expect from a relationship between them.

There were places, too, where I felt a desire for more subtlety in the writing. Here’s an example:

He stopped suddenly as if she’d interrupted.

For me, the words “as if–? are sufficient to indicate that Anna hadn’t interrupted Edward in this exchange. As a reader, it’s important to me to feel that authors trust my intelligence and know that I will understand their words. The scene in which these two lines appeared is meant to be an emotional one, and it would have had a lot more power for me if I hadn’t been distracted by the unnecessary explanation in the second paragraph.

Nonetheless, there were also things I liked about this book. The fairy tale of the raven prince was lovely, and I enjoyed the way the bird theme was woven throughout the book, with Anna’s last name and the comparisons of Edward to a raven. I like that the main characters were both relatively plain (in Edward’s case, even ugly).

I also liked the character of Coral, the demimondaine. Her cynicism really appealed to me and I hope that she makes further appearances in future books. Some of the character names were evocative and enjoyable (though others, like Chilly, Dreary, and Lazarus Lillipin made it difficult to suspend disbelief). There were some nice turns of phrase in places, too. And as mentioned before, the sexy scenes are very sexy.

Overall, though, The Raven Prince was a frustrating reading experience for me, enough so that by the second half of the book I was skimming. So many readers have loved this book, and I’m glad that it found an audience and that its fans have enjoyed it so much. I truly wish I felt the same way.

I have no doubt that there are and will continue to be other readers for this book, and I recommend that our readers who haven’t done so yet read Jane’s review and Jayne’s review as well before deciding whether to buy it. Since I skimmed the second half and did not go back to read it in its entirety, for me The Raven Prince is a DNF.