REVIEW: The Highwayman by Kerrigan Byrne

More and more, it seems like the newer crop of historical romances are leaving the history behind. I’m not a stickler for historicity, but I want a historical romance to have at least some historical feel. These days many books don’t even read like they take place in an alternate version of the 19th century, but rather as though they are set in a 21st century Regency or Victorian dress costume ball. 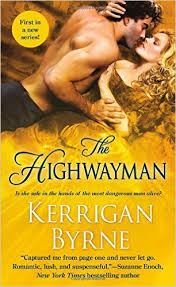 Such was the case with your debut, The Highwayman, which I purchased after hearing some buzz. The Highwayman begins with an emotionally affecting prologue, set in 1855, in an orphanage named Applecross, in the Scottish Highlands.

Eleven year old Dougan Mackenzie is beaten severely by a nun and an eight year old girl who cannot reveal her surname, Farah, comes to his aid. The children become fast friends, and two years later, when Farah reveals her betrothal to a grown man she dislikes, they even promise themselves to one another in a hand fasting ceremony. But when a lecherous priest attempts to molest Farah and Dougan kills him, the two children are separated. Dougan is taken away to be imprisoned.

The story picks up in 1872. Farah, now a “widow” who goes by “Farah Mackenzie,” works as a clerk at Scotland Yard when a notorious criminal is brought in. Dorian Blackwell, also known as “the Blackheart of Ben More” is a wealthy criminal mastermind who has evaded justice multiple times.

But now Dorian has been captured, and Farah is present for Chief Inspector Carlton Morley’s interrogation of him. Morley, Farah’s employer, is courting her, and she has recently begun to consider marrying him, so she is dismayed when Dorian provokes Morley into hitting him by making insinuations about her.

Soon after this, Dorian escapes police custody with the aid of a crooked cop. He asks the same cop for information about Farah Mackenzie. Dorian learns where Farah resides and turns up in her apartment in time to overhear Morley proposing to her on her doorstep.

Farah tells Morley she’ll consider his proposal. Upon entering the apartment, she is confronted with Dorian, who drugs and kidnaps her. Dorian whisks Farah to the Scottish Highlands, to the castle called Ben More where he has a coterie of loyal ex-convicts working for him.

After a failed attempt to escape Ben More castle, Farah reluctantly agrees to hear Dorian out. Dorian explains that seventeen years earlier, he was sentenced to seven years’ hard labor in prison for theft. While there he met Dougan Mackenzie, the boy Farah pledged herself to as a child. An enmity developed between them, but later turned to loyal friendship.

Dougan saved Dorian’s life, so when Dougan was murdered in prison, Dorian vowed to find his “fairy” and avenge those who have harmed her as well as Dougan. Dorian’s search for Farah began at Applecross orphanage, where he learned that Farah was Farah Leigh Townsend, the daughter of Earl Northwalk, a girl who supposedly died of Cholera in childhood.

Not only that, a woman has recently come forward claiming to be Farah Townsend, while Dorian unearthed a secret “business contract” for the real Farah’s disappearance.

As a child, Farah was engaged to a man named Harold Warrington, and it appears he’s found an impostor to supplant her. Warrington plans to marry the impostor to get his hands on Farah’s inheritance. Now Warrington is trying to kill the real Farah, and Dorian kidnapped her to protect her life.

Farah, Dorian says, could destroy Warrington’s plans if she comes forward to claim her title.

Dorian proposes to marry Farah, so that he can protect her from Warrington and restore her legacy to her. In return, Dorian will gain the title of earl and a Parliament seat through the marriage. Despite some reservations about Dorian’s character and whether love can grow between them, Farah agrees.

There’s just one catch—Dorian is averse to physical touch, while Farah insists that the marriage be consummated. The wedding night will have to take place with Dorian’s gloves on, and as little touch as possible outside of that.

Will Farah fall in love with her mysterious husband? Will she discover the truth of Dougan’s experiences in prison? Will her title, Countess Northwalk, be restored to Farah, and can Dorian and she ever have a normal marriage with touching and the children Farah wants?

Recently I came across an online discussion of The Highwayman in which a reader said that this was the kind of book you can’t think too deeply about or it falls apart. Unfortunately, I didn’t have to think deeply at all for that to happen. The book falls apart all by itself.

First, there’s the fact that for the plot to work, you have to buy that Farah wouldn’t recognize Dorian as Dougan, the boy she befriended at Applecross, despite her years long devotion to Dougan. Yes, “Dorian” has a scar on his face and his wound changed the color of one of his eyes. But still, it seems farfetched in the extreme, since he was thirteen the last time that she saw him.

Second, there’s the fortune Dorian amasses after winning “what was now known as the Underground War.” In ten years, Dorian finds the time to infiltrate and take over the London underworld, make “an incredible number of wanted thieves, pimps, bookmakers, traffickers, slumlords, and the reigning heads of existing criminal enterprises” as well as “half the criminals being investigated by Scotland Yard” disappear, and ruin “several of the London elite” through “monetary carnage,” “with the swipe of a pen and a whisper of scandal.”

Later in the book, it becomes clear that Dorian has important judges in his pocket as well. He also gives generously to charities that help children, sponsors “the careers of artists and performers,” “stimulating the emerging middle-class economy with some very sound investments.” Yes, this lad once caught for stealing is now “one of the wealthiest men in the empire,” and somehow he has time to brood in his castle in the Scottish Highlands, too.

One also has to believe that Ben More castle can function without any women, including female servants. The three ex-cons serving Dorian include a gentle giant who suffered a brain injury and now works as a cook (Farah nicknames him Frank after Frankenstein), baking tarts in the kitchen with no assistants. Then there is Dorian’s confidant, Murdoch, who doubles as Farah’s lady’s maid.

Yes, Murdoch helps Farah dress and even bathe, and Farah, an unmarried woman in 1872, has no issue with that. When Farah asks why Murdoch is the only man whom Dorian will allow to attend her in her boudoir, this is the answer Murdoch gives her:

Murdoch shifted his weight a little uncomfortably. “Well, lass, that would be due to my lack of… er… romantic proclivities….toward women….that is….”

“You prefer men,” Farah deduced around a second spoonful.

From what I could ascertain, Farah’s title is one of those rare titles that can pass through the female line. But the kicker is that Farah herself does not understand how this works.

“I haven’t anything to prove that I am Farah Leigh Townsend,” she began. “Especially now that someone else has adopted the name. Also, a woman can’t claim the title and lands of the peerage without being married. […]”

Yup, Farah, supposedly the most competent clerk at Scotland Yard, believes she won’t be Countess Northwalk until she marries, even if her groom has no title of his own. Later in the book she learns otherwise, but I couldn’t blame Warrington when he decided he had to explain to her that in the British military, commissions like her father’s can be purchased.

The backstory of how Farah came to be betrothed to Warrington, a common soldier, as a child is equally preposterous, given the differences in their social stations, but since it comes late in the novel, I won’t go into it.

There are historical inaccuracies, too many to list, so I’ll only go into a few. Farah’s life has a distinctly twenty-first century feel. She and her landlord, the owner of a coffee shop, sip coffee in his establishment and discuss their favorite books and authors. And part of Farah’s evening with Morley is described this way:

They avoided both the heavy topics of the Blackheart of Ben More and her future during their light Italian supper, instead allowing themselves to be serenaded by a roving violinist and gorging on a scrumptious Pasta Pomodoro with an excellent red table wine.

Reading this, one would not know the scene takes place in 1872, since for women to dine publicly with men was not socially accepted until the 1890s.

Farah proves she is the real Farah Townsend in Her Majesty’s High Court, in front of the Queen’s Bench, rather than having this matter taken up by the House of Lords or sent to the Committee of Privileges.

Additionally, Farah tries to dissuade Dorian about her identity by stating that “Farah is a common enough name, and Leigh s a very ordinary middle name, so your mistake is understandable.” In what world is the name Farah common enough? Certainly not among the aristocracy in nineteenth century England. I could find not one instance of the name Farah in this Debrett’s Peerage edition from 1862.

As for the writing, the dialogue is a mix of faux brogue and twenty-first century phrases.  The characters say things like “Probably the first week of never,” “Doona fash yerself over it,” “I’m not the predator here, ye are!” and “if Dorian Blackwell thinks he can deny me what he promised, he has another thing coming,”

While the sex scenes offer some freshness, what with the use of gloves and the fact that Dorian can’t bear to have any touch he gives reciprocated, the characters lack the depth to bring this story alive.

Farah is an idealized figure, kind and patient with everyone, never in a bad mood. Most of the secondary characters, many of whom are Dorian’s associates, have heard about her for years and seem ready to worship at her feet without taking the trouble to get to know her first.

Dorian, for all his notoriety, hasn’t ever killed anyone who didn’t deserve it, and only kidnapped Farah to save her life. He fears his touch and his sexuality will sully Farah, and he has a painful backstory with his father, as well as during the years of his imprisonment, but his issues are never explored or investigated, and his portrayal lacks nuance or acuity. His baggage is treated superficially, and feels as if it exists merely to excite readers with his “darkness.”

The fact that I read as far as the 87% mark on the kindle (this is really about 90% since the last 4%  is taken up by an excerpt from the next book in the series) is a huge testament to the strength of the authorial voice. I thought about finishing so I could give this book a letter grade, but since I started doing some skimming around the midpoint and didn’t want to backtrack, it gets a DNF.