REVIEW: Stranded with Her Ex by Jill Sorenson

It is with regret that I write this DNF review. The blurb of “Stranded with Her Ex” sounded so interesting. Two divorced wildlife researchers – a seal researcher and a shark expert, stuck together out on a remote island, find each other again. But as I’ve sometimes found, blurbs that caught my eye don’t always work out for me when I’m when presented with the total product. 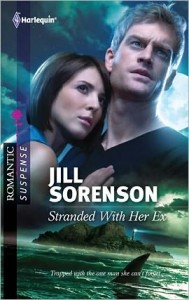 Somehow I got a wrong impression about the tone of book. When Jane emailed me the info, I must have completely missed the part about it being a Silhouette Suspense novel and I kept waiting for the light, frothy comedy I was expecting but found angst galore. It’s certainly not your fault but I had to do 180 mental turn just as the book is beginning which irritated me, again more at myself, for misreading what I was getting myself into. Note to self: always double check category of book before starting.

Daniella is a special snowflake. In the first few chapters I get told over and over how fragile she is, how likely to mentally collapse, how worried her ex is about whether or not she’ll be able to do her job and not go into complete meltdown. It’s wearing to be around people like this – and I’ve worked with a few – and wearing to repeatedly read about how close they and everyone around them thinks they are to a breakdown.

Sean is hunky, hunky, hunky. I get it. But he’s also Mr. Secret Emo Sensitive who was crushed when his attempts to reach out to Daniella following their tragic loss were rejected. He’s worried enough about Daniella’s mental status to almost order her off the island. At the point I stopped reading, that irked me more than made me say “aaah, he cares.”

I’m not a fan of mental lusting and, oh boy, there are tons of this. Literally ‘coming to a halt and staring’ mental lusting. ML to the point that everyone around them notices it and sometimes smirks about it. Sean is turned on by the heroine’s toothpaste aroma. Right.

These are animal researchers on a preserve island. At one point Daniella thinks that this kind of work is not for the faint of heart. It’s not. I applaud you for being realistic about this survival of the fittest. It’s elemental survival. It’s also gory and described – sometimes in detail. I am a bleeding heart when it comes to animals and though I realize in my head that carnivores must eat meat to survive, I don’t want to read about the way the remains of a seal look after the initial strike of a shark. I don’t want that mental image in my head. I respect your talents as an author to describe it so realistically that I have this mental image but I don’t want the image. Then there was the scene of the baby seal with the plastic around his neck, who is obviously doomed, and the ongoing threat of whoever mutilated another seal corpse which I just didn’t want to read anything more about.

Certain aspects of the story get bogged down. There’s lots of detail about the different species of birds on the island. Needed? I don’t think so. That is followed by more information about the early people to live there – which I found myself skimming. And then there is lots of info about surfing, wanting to surf, surfing conditions, surfboards – which I found boring.