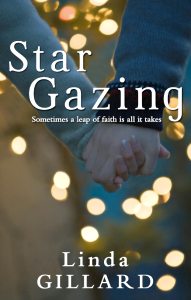 Your review request caught my eye because you described the heroine of your novel, Star Gazing as congenitally blind, and mentioned that this story takes place on the Isle of Skye. You also mentioned that the book was short listed for RNA’s Romantic Novel of the Year award. I surfed over to Amazon and read some very enthusiastic reviews, and decided to take you up on your offer and review the book.

Unfortunately, what I’ve read of Star Gazing has failed to engage me and I was only able to read at a glacially slow pace. Even more than a hundred pages in, I remain emotionally detached, and so I’ve come to a point where, in order to write this post on a timely basis, I’ve given up on finishing the book.

Star Gazing does have some good qualities which I will describe after the following plot summary:

The novel begins when its heroine, the blind, forty-five year old Marianne Fraser, runs into a cyclist near the front door of the Edinburgh home she shares with her sister, Louisa. The bottle of burgundy Marianne is carrying shatters and the door keys slip from her hands. A stranger offers his help and as he assists her, their mutual love of opera comes up.

Later, while at the opera, during the intermission, they meet again. Louisa, Marianne’s sister, is away buying drinks when the man introduces himself as Keir Harvey. Keir’s last name is a shock for Marianne since it was her late husband’s first name.

Marianne’s late husband worked in the oil industry and was killed in an accident. Marianne was devastated not only by Harvey’s death, but also by the miscarriage she suffered shortly afterward. The experiences she had with men in the years that followed were unpleasant, so she is somewhat jaded about the opposite sex when she and Keir meet. And she is not sure what to think of Keir when she tries to introduce him to Louisa, only to realize he is no longer there.

Keir and Marianne encounter one another again at the botanic gardens, and she confides in him about the losses she has suffered. When Keir is away, he mails her a cassette tape of him talking. On his return, Marianne invites Keir to her house for dinner, but he does not show. Louisa suspects that Keir is a figment of Marianne’s imagination, but then he reappears. It turns out that Keir, whose job is to spot hazards and prevent accidents from happening, was in an accident on an oil rig, and has been in the hospital. When Marianne realizes he was injured, she not only forgives his absence, she also accepts an invitation from him, to come to his home at the Isle of Skye.

In Skye, Marianne and Keir sleep in separate rooms, but in a rather reticent way, they both acknowledge their attraction. Keir describes the surroundings to Marianne, and explains that he tries to protect the area’s natural habitat. It would be cliched to say that Keir becomes Marianne’s eyes, but he makes it possible for her to perceive things she can’t see.

Marianne is a rather different kind of romantic heroine, not only because she is blind, but because she carries a lot of bitterness. She is, as she herself says, “incandescently angry.” Although I understood why Marianne might have a chip on her shoulder, especially after her husband’s death, her miscarriage, and having other men attempt to take advantage of her blindness or put her in the helpless-woman-in-need-of-rescue role, I still didn’t feel much of an emotional connection to the character.

Keir, who is a few years younger than Marianne, yet clearly mature and responsible, was somewhat more appealing. But with him too, as with Marianne, I felt somewhat at arms’ length, in this case perhaps because most of the time, there wasn’t much insight into his thoughts and feelings.

Star Gazing is written in alternating third person and first person sections, both in present tense. The third person sections in the first hundred or so pages keep the characters at a distance from the reader, with a lot of dialogue but very few internal thoughts.

The first person sections I read provided Marianne and Louisa’s viewpoints. Louisa’s POV included some humor, and she was a colorful character, a 51 year old writer of vampire novels who struggles with her weight and has a friendship with a younger goth named Garth.

The best part of this book for me were the descriptions of how Marianne perceives the world:

I love the garden in all seasons. I especially love it when it rains. I like to shelter under the trees when they’re in full leaf and listen to the patter of rain as it forms a kind of sound-sculpture for me, defining the size and shape of a tree, giving me an aural sense of scale, of distance.

I also appreciated the way Keir used Marianne’s auditory sensitivity to translate images into sounds for her:

‘If you look east, one of the brightest stars you’ll see is Arcturus. It has a yellow-orange glow. Most stars look cold. Icy. They’d sound like…flutes. No, piccolos. Shrill. Arcturus looks warmer. A cello maybe… It looks like the stove feels when it gives off just a bit of heat. Arcturus glows, but it doesn’t burn or blaze like the sun. It’s like the feeling you might have for an old friend… or an ex-lover, one who still means something to you. Steady. Passionless. On second thoughts, make that a viola… How am I doing?”

Yet the emphasis on Marianne’s blindness became less interesting to me as the book went on. I would have preferred to see it treated as just another facet of her character, and less of a focal point.

My main problem with the first hundred pages of this book was not this, though, but rather that the writing felt subdued. The emotions were somber and understated to a point where the writing felt dry to me, and I felt detached from the characters and from their story, despite the fact that the prose was above average.

The pacing also felt slow to me, but that may have been due to my lack of engagement. If there is such a thing as a book that is too grounded in reality for me, this book was an example of that, since Marianne and Keir lacked a kind of romantic glamour that I look for, and I think what I read of their story could have benefitted from more dramatic turns.

I wish I had been able to get more caught up in Star Gazing, and I expect there are readers to whom it might appeal more. But I have not been able to overcome my emotional detachment from the story, and rather than force myself to finish it, I’ve decided to stop reading. Therefore for me, this one is a DNF.