REVIEW: Selfish is the Heart by Megan Hart

Selfish is the Heart is the third book in your Order of Solace series, and I was not sure what to expect of it given how widely my responses to your two earlier works in this series differed. I gave Pleasure and Purpose an A- review, and No Greater Pleasure a DNF grade. 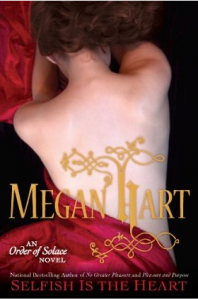 Three things convinced me to give Selfish is the Heart a try despite my disappointment in No Greater Pleasure. The first was my love for Pleasure and Purpose, the second a comment by a reader, Joanne, stating that she'd heard that No Greater Pleasure was written years before Pleasure and Purpose, and the third the description of Selfish is the Heart which I read on Amazon and which intrigued me greatly.

The national bestselling author of No Greater Pleasure delivers a new novel featuring a reluctant student of seduction.

To escape an arranged marriage, Annalise Marony decides to become a Handmaiden of the Order of Solace. But she is thwarted at every turn by Cassian, a teacher of the faith, who must test her dedication. Older than most of the girls, Annalise knows that she will be expected to please a patron in pleasures of the flesh-and she is not shy about teasing Cassian. And as they both play out the game of master and student, the secrets in their souls will either tear them apart-or bind them together forever.

My attention was captured by this and I anticipated this book with excitement, but unfortunately the first ten chapters did not live up to the description above (more on that later), and I stopped reading at page 125 (of 307 pages).

Readers of the two earlier books in this series know that the books take place in a fantastical setting. By fantastical I don't mean there is a lot of magic or strange creatures, just that the world is a fictional one. It is somewhat reminiscent of 19th century Europe, although its religion is quite different. Here is a description of that faith, taken from my review of Pleasure and Purpose.

It is the prevailing religious belief that each time a soul finds perfect solace, even if only for a moment, an arrow appears in the god Sinder's quiver. According to legend -‘ and many people's faith -‘ when the quiver is full, Sinder, his wife and his son, The Holy Family, will reunite, bringing peace and harmony to mankind.

To that end, the Order of Solace was created. The women who enter the order, called handmaidens, make it their task to bring solace to the patrons who engage their services. Sometimes doing that involves sex, but there is more to it than that. To give an idea of the handmaidens' outlook, here are the five principles which comprise the tenets of the Order of Solace's philosophy:

“1. There is no greater pleasure than providing absolute solace.
2. True patience is its own reward.
3. A flower is made more beautiful by its thorns.
4. Selfish is the heart that thinks first of itself.
5. Women we begin and women we shall end.”

Most of the women who enter the Order of Solace do so out of true faith, but Annalise Marony is different. Although her mother is deeply religious, Annalise herself is not, but she is trapped in an engagement she agreed to but later changed her mind about. Annalise's fiancé, Jaquin, is a childhood friend she has a lot of affection for, but he is not attracted to her – or to any woman. Jaquin is gay.

In order to escape marriage to Jaquin in a way that won't bring dishonor to either of them, Annalise pretends to have a vision that leads her to join the order and train to become a handmaiden. She plans to stay a student without ever graduating, since she has no interest in catering to the whims of patrons.

On Annalise's arrival at a forest near the Order's motherhouse, she is given misleading directions by a man. She does not realize right away that this is a test of her dedication. When she finally arrives at the motherhouse, Annalise encounters the same man again. He is Cassian, one of the few men who live in the motherhouse, and he is a priest and instructor there.

An attraction develops between Annalise and Cassian, but Cassian refuses to acknowledge those feelings. Cassian has divorced himself from other people emotionally, and cut himself off from their affection for reasons that aren't made fully clear in the section I read. But as Annalise and Cassian encounter each other again and again, they get under one another's skin. Will Annalise thaw Cassian's heart? Will she come to respect the faith she disdains? Will the two admit their feelings and will they find solace?

I did not read far enough in this book to find out the answer to most of these questions, for the following reasons.

My feelings on Annalise were mixed; she was not instantly sympathetic to me, but not immediately unsympathetic either. Her disdain for the beliefs held by her fellow novitiates at the motherhouse did not appeal to me; even though I find the tenets of the Order of Solace's faith antifeminist, I still didn't enjoy seeing the novitiates' honest and profound devotion scorned.

Still, this unappealing aspect of Annalise's character was somewhat mitigated by her kindness to Tansy, her sweet, younger roommate, and her affection for Jaquin, her fiancé, despite the fact that he had no romantic or sexual feelings for her.

But as the novel proceeded, I found myself less and less interested in Annalise. Perhaps the problem there was that she was simply too ordinary, and lacked some of what I think of as the sheen of romantic glamour that I feel most romance protagonists (including many of your own main characters) possess.

I also felt that in the portion of the book that I read, Annalise did not face any deep internal conflict or strong external obstacle to make her compelling. Perhaps that changes later in the book, but if it does, I didn't get far enough into the story to know about it.

Cassian was more immediately interesting, especially when he was first introduced. It was evident from early on that he had walled himself off from the rest of humanity, and I was curious at first as to the reason he had closed himself so completely to warmth and affection.

Unfortunately, by the time I stopped reading, some hints had been given about that, but the answer was not yet revealed. And in the meantime, while waiting to learn the reasons for Cassian's coldness, I became frustrated with it because I wanted to see more of a relationship develop between him and Annalise.

Having read several of your works, I know better than to count on feeling instant sympathy for the main characters, and I believe I might have still enjoyed the book even so, had the story unfolded with more narrative drive. But the book's pacing was sedate and slow, and as it continued there was too little interesting new information revealed about the characters and their situation.

A third problem for me may have been one of expectations. The book description posted on Amazon states that Annalise is "thwarted at every turn by Cassian, a teacher of the faith, who must test her dedication." This conveys a strong conflict that did not materialize fully enough in the first ten chapters to entice me to keep reading.

Annalise and Cassian's scenes consisted mainly of squabbles in the religion classroom that did not seem to me to give the story much momentum. There were also many scenes of Annalise and Tansy's friendship, and while I liked Tansy's sweetness, these didn't move the story forward much either. Cassian's scenes with a young boy in need of an adult male's attention were a bit more interesting.

Admittedly, I am a reader with a short attention span and when a book is paced slowly and lacks a strong enough conflict to engage me, my reading speed, which is slow to begin with, lags to a turtle's pace. That was what happened with this book, and so, at the end of chapter ten, I stopped reading and decided that this particular book was just not for me.

I am not happy to give another of the books in this series a DNF grade, especially when I loved Pleasure and Purpose so much. I do hope that other readers enjoy the book more than I did.