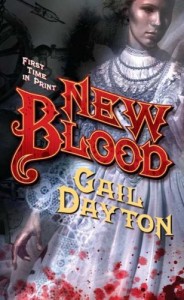 Unlike some of my fellow reviewers here at Dear Author, I don’t try books by new-to-me authors as frequently as I probably should. A lot of that is simply due to the fact that I am a slow reader and it takes a lot of my reading time to keep up with new books by authors whose previous works I’ve liked. But another piece of it is that although I can enjoy books in a wide variety of genres, I am, even so, a finicky reader with very specific tastes. Nine times out of ten, when I try an author I haven’t read before, those tastes go unsatisfied.

Such was the case with New Blood, which I decided to try after hearing it was steampunk and reading an excerpt that intrigued me. I don’t feel that New Blood was a bad book–I have certainly read much worse, and the fact that I made it to the one-third point shows that it is stronger than many of the other books I’ve tried, only to put down much earlier. But for me, New Blood also wasn’t a very absorbing book. It was very easy to put down and I ultimately decided not to finish reading it.

New Blood is set in alternate version of nineteenth century Europe, one in which some men practice magic while women are forbidden to do so. There is one type of magic, however, that women have particular affinity for: blood sorcery.

The story begins when an Englishman known only as Jax finds the object of his long search in a Transylvanian forest. Amanusa is the daughter of a Romanian woman and an Englishman. She lives alone in her cottage and practices healing and the minor spells which women can get away with casting in Eastern Europe.

Amanusa has suffered loss and abuses in the past, so when Jax appears in her garden she is reluctant to trust him, even after he introduces himself as the former blood servant of Yvaine, a deceased blood sorceress from England. Before she died, Yvaine commanded Jax to find her successor, and that is what Jax believes Amanusa to be.

Jax becomes possessed by Yvaine’s magic, and the dead sorceress communicates with Amanusa through him, telling Amanusa that a great evil is rising and that blood sorcery will be needed to combat it. Amanusa begins to feel sympathy for Jax, but she is afraid to accept his offer to teach her blood magic. She knows that to learn true sorcery is to risk the persecution of the Inquisition, which hunts down women who practice powerful magic.

Still, Amanusa is hungry for justice, so when Jax explains that blood magic is the working of justice rather than evil, it does not take Amanusa long to change her mind. She is only beginning to learn how to use her abilities when a group of anarchists whose camp isn’t far from her cottage insist that she come and heal one of their wounded.

One of the anarchists, Teo, clearly wants to rape Amanusa, but Jax, who pretends to be slow-witted so that the anarchists will allow him to accompany Amanusa to the camp, is determined to protect her.

At the anarchist camp, Amanusa and Jax encounter an insectile machine made of metal that has injured a man and exudes evil. They manage to contain the thing, which they sense is anti-magic, in a box.

Eventually, Teo pushes his luck and Amanusa’s blood magic is set loose. Jax and Amanusa escape the camp, but rumors follow them, and they soon find themselves in the hands of the Inquisition. They must attempt another daring getaway, and hope that they reach England safely.

Meanwhile, in France, English wizards are investigating the appearance of a patch of evil space inhabited by insectile machines which have killed children. A similar patch has appeared in England. One of the wizards, Henry, thinks blood magic will be needed to combat this evil. But only women have an affinity for blood magic, and the other wizards think no good can come of teaching magic to women. Not only that, there are no blood sorceresses left…

I began New Blood with high hopes. I love the concept of the steampunk genre which blends fantasy, science fiction or paranormal elements with the setting of our own nineteenth century or a world which contains nineteenth century level technology (I believe that the “steam” part of the term “steampunk” refers to the nineteenth century railroads and boats which were powered by steam engines).

In this case, though, I felt that I didn’t get as much of a feel for the setting as I had hoped. Occasionally there was a mention of some period item such as hoop skirts or railroads, but there was not enough period detail for me to feel transported a century and half back in time. There was also not as strong a regional and cultural flavor to the depictions of the Romania and Paris settings as I would have liked.

Another problem for me was the characters. Amanusa and Jax are both sympathetic characters who gradually grow to care about one another, but neither one was compelling to me. I felt that I could stop reading without wondering about what happened to them in their future.

When I tried to figure out why I felt this way, I realized that, in the section that I read, neither one of them had conflicted feelings for very long, nor did they badly want anything that they could not attain.

True, Amanusa did resist accepting the role of blood sorceress at first, but it didn’t take her long to change her mind. And yes, Amanusa did want justice for her loved ones, but it didn’t take her that long to attain it. And even there, Amanusa kept thinking of her need in terms of justice, but since we weren’t given specific memories of her dead loved ones, nor her feelings of sorrow for them, it was hard for me to feel invested in seeing this justice attained.

As for Jax, he was a fairly muted character and after the opening scene, in which he feared Amanusa, he did not seem to have deep feelings beyond his liking for Amanusa and his occasional anger or worry when she was threatened. I understand that his feelings were sublimated partly was because he was under Yvaine’s spells for so long, but still, it made it hard for me to care deeply about his fate.

The part of the book that I read had an episodic feel to it. Amanusa and Jax seemed to go from one situation to another but these felt more like separate incidents that happened to the same characters than like a whole, connected story about the two of them.

The main, overarching plot wasn’t the story of Jax’s mission to find Amanusa in the nick of time, or of Amanusa’s quest for justice; it was the story of the evil patches rising across Europe and of Amanusa’s training in the use of blood magic. This story failed to compel me for two reasons. The first is that stories of the rise of a dangerous evil shrouded in mystery which threatens the land and must be combated through magic have been a mainstay of the fantasy genre at least since Tolkien, and therefore, it’s not a premise that feels very fresh to me.

Secondly, I fully acknowledge that I am probably not a member of the target audience for this book. I read more for compelling characters than I do for dramatic plots (though I love it when I get both in the same book). I was also hoping for more romantic development than I got in the first third of the New Blood. The book is labeled “Paranormal Romance,” but to me, the fantasy elements seemed more pronounced than the romantic ones.

I suspect that readers of epic sword-and-sorcery fantasy might enjoy this book, though. The prose is solid, the characters sympathetic and I also appreciate that in their relationship, Amanusa and Jax don’t fall into typical gender roles. I wish that the section I read had gelled better for me, and kept me turning the pages. I also wish the book luck in finding its audience. For me, New Blood is a DNF.

This book can be purchased in mass market from Amazon. No ebook format yet.