Warning: mysqli_query(): (22032/3141): Invalid JSON text in argument 1 to function json_contains: "Invalid value." at position 0. in /home/customer/www/dearauthor.com/public_html/wp-includes/class-wpdb.php on line 2187
 REVIEW: Mistakes Were Made by Meryl Wilsner
October 19, 2022

REVIEW: Mistakes Were Made by Meryl Wilsner

I really enjoyed your debut, Something to Talk About, and when I read about your new contemporary romance, Mistakes Were Made, I got really excited. It has a trope I’m really fond of, May/December (not everyone’s cuppa I know, but I really like it when it’s well executed), as well as a messy situation, which is another trope I’m drawn to. 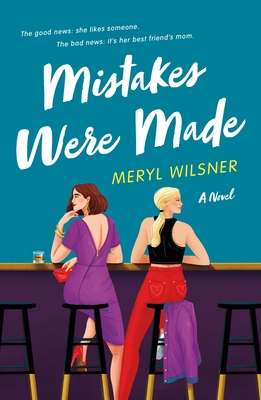 In this case the messy situation is that Cassie Klein, a senior at her Virginia college (so probably twenty-one) picks up an attractive older woman, Erin Bennett, at a bar and they hook up for what appears to be a one-time-only, but the next day they meet again—this time when Cassie’s freshman friend Parker introduces Cassie to Erin, her mom. Oops.

Things only get more complicated from there out, as Cassie and Erin almost hook up again in the ladies’ room during a campus concert, and then, when they decide to stay away from each other, Cassie still drunk dials Erin and nearly gets caught by Parker. Cassie determines not to do that again (her and Parker’s mutual friend, Acacia, drives the point that it’s a self-destructive idea home) but then Parker surprises her with plane tickets to come visit her at her mom’s over Christmas.

At Erin’s house, it’s again difficult for the two women to keep their hands off each other, and they nearly get caught kissing. Parker is of course, completely clueless to what’s going on under her nose, and Cassie and Erin both feel terribly guilty over that.

So—I really wish I’d liked this book but I didn’t. The problems started right off the bat. Firstly, since their bar hookup happened on Parents’ Weekend, how surprised should Cassie have been that Erin was the mom of one of the students? And that holds even more true for Erin. She’s near a college campus; chances are that the young woman who is picking her up is a student, like her daughter.

Second, Erin was described as “two years out from forty” which made me think she was forty-two. Later reading clarifies that she’s thirty-eight, though, so I think the phrase should have been “two years away from forty.” In another book this would be a minor copy error and nothing more but here it really makes a difference. Cassie is, I’m guessing, twenty-one, and a difference of seventeen years in age isn’t as bad as a difference of twenty-one. Plus, once I had a visual image of Erin as forty-two, it was hard to think of her as thirty-eight.

Also, what was Erin thinking when she agreed to Parker’s plea that she purchase plane tickets to surprise Cassie with so she could come stay with them for Christmas? That puts Cassie on the spot—it’s not like she can easily turn Parker down once tickets are already bought. That really bothered me, especially given the other power gaps between her and Cassie.

Because the age difference is far from the only power gap operating here. Cassie, a physics student with aspirations of working for NASA, is ambitious but comes from an impoverished background. She was lucky to get a scholarship to the school, but it’s clear that as a child she was neglected and abused, and she’s still broke now. Erin, meanwhile, is a doctor, with all the middle-class comfort and ease and privilege that implies.

On top of that, when the romance really takes off Cassie is a guest in Erin’s home. That’s an uncomfortable position to be in because (after coming there due to the pressure of being presented with the fait accompli of purchased plane tickets) it’s not like Cassie can easily get away from Erin once she is there. She doesn’t know anyone there but Erin and Parker, and she can’t confide in Parker. It’s not clear if she has enough money to find other lodgings if she wants to leave. She’s under Erin’s roof, with Erin providing her food and shelter.

And none of this is dealt with in the first third of the book, which is as far as I got. Neither of the women think about this.

To a point, I could go with Cassie’s focus on the question of what would happen if Parker found out almost exclusively; it made some sense since that was pretty high stakes for her and she wasn’t in control of the fact that she was essentially at Erin’s mercy. A lot of people minimize their own powerlessness by focusing on something else because it makes them feel more okay, and this fit Cassie’s personality, so it wasn’t a huge issue for me.

It was, however, a huge issue for me where Erin was concerned, because Erin was in control of the situation, to a large degree. For Erin not to think about it was somewhere between thoughtless and clueless (and not in a good way). I don’t care how caught up she is in her attraction for Cassie and her fears that Parker will find out (understandable since there was tension between Parker and Erin over Erin’s split from Parker’s father, and Erin felt insecure in her daughter’s love), Erin should still care enough about Cassie to think about what she’s doing to her, how the power dynamics might be affecting Cassie. And instead it was a constant mantra of “What if Parker found out?” and guilt for being a bad mother to Parker, and no thought to the fact that she was mistreating Cassie by putting her in this position. And this despite the fact that she was the adult in the situation.

TBH, although Cassie is a consenting adult, the kind of discomfort I felt here was a milder version of the discomfort I feel when I read about situations where kids are involved and aren’t quite old enough to consent. The power gap was too wide, and while Erin’s intentions may not have been to prey on Cassie, many of the conditions of a predatory situation were nevertheless present. Particularly when I also factor in the fact that Cassie was more or less abandoned by her own mother, and Erin was the mother of a friend. This situation felt creepy, not romantic or fun.

The writing itself was pretty good, and Cassie’s character had some depth, but it didn’t matter because I was just too uncomfortable to keep reading. I stopped at 33%, so obviously, this is a DNF.