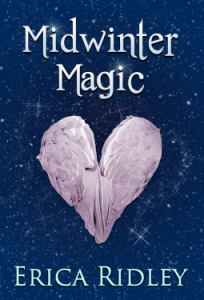 After an eye-opening congressional hearing, former corporate shark Jack Morgan redirects his ill-gotten gains toward charity work. However, his attempts to bring holiday cheer to a Bolivian village meet with one disaster after another: canceled flights, crumbling luggage, implacable customs officials. His plans disintegrate further when he runs into a sexy tourist with . . . wings?

As Jack’s guardian angel, Sarah Phimm has her work cut out for her. When his latest volunteer mission risks his life, she’s forced to reveal herself to him—but only in part. She can’t risk him knowing the truth. He’s everything her immortal heart desires, but can never have. She soon discovers that keeping him safe amidst death bridges and tumbling telephone poles is far easier than guarding her heart.

For me to not finish a novella, things have to go terribly wrong. Usually I don’t even bother to file these write-ups in my Reading List posts much less do a DNF for them but this one compelled me to. It isn’t just that it failed me as a nice, little holiday sugarplum tidbit. It failed me because took my holiday cheer away and stomped on it.

It starts innocently enough with former corporate raider Jack determined to make up for all the rapine and pillaging his companies have done to little hamlets everywhere. He’s Seen the Light and is all about Doing Good in the world. His guardian angel is only concerned with keeping him safe until his predetermined date with death at age 70. She has guidelines to stick to.

After a major screw up on her part in letting Jack see her at all, Sarah has no choice but to stay with him in order to try and keep him from discovering her true identity. But she messes that up too. Then throws herself a pity party when Jack asks her about birthday parties and holiday celebrations in her neck of the woods and it dawns on her – after 1000 years?? – that she’s never had either. But it’s not this maudlin goopiness or having an angel lusting after her super hawt charge that caused me to toss in the towel.

No, there is much more along the way that did that.

Jack is determined – determined, damn it! – to Do Good. He’s got the money so he’s going to not only to spend it on the poor of the world but he’s going to put sweat equity into the bargain. At first this is nice however as the story progressed it began to take on the “white male arrives to save the poor but noble brown peasant” tones. Jack is just so rich and the Bolivians are all just so impoverished and dignified yet so grateful at his generosity.

As I was getting more and more uncomfortable about all this, the final nail in the novella coffin gets hammered. Sarah reveals to Jack that she’s his guardian angel – a mistake of major proportions for her. Her end of the month review will be harsh. Then comes the kicker. Jack wonders why the Bolivians they’re helping are in such desperate straights. Don’t they have guardian angels too? “Well …. um, no,” Sarah tells him. Seems like there aren’t enough to go around and poor, third world Christians apparently need not apply. Then she tries to justify the fact that this rich, white American dude gets one by telling him how much good he and his money are doing for the world and that somehow this balances out. Despite the fact that it was his businesses that have ruined the world, or so Jack thinks.

Pope Francis would be pissed about this and so am I. Slack jawed at the hoops the story is now jumping through to try and maintain the plot, other inconsistencies jumped out at me. Sarah is 1000+ years old but goes into brain freeze when she appears to Jack and picks some bizarre outfits. She’s stuck by his side his entire 35 year life and hasn’t noticed what people usually wear? Then there are her wings. Jack hears them ruffling at times and at others they’re an inconvenience – like when Jack sleeps and drools on them – yet there are times – such as when Sarah sits in the passenger seat of an SUV for hours – where they’re not mentioned at all.

So I’m down to nitpicking at this point but I was just so deeply disappointed in this novella that it’s hard to stop. I think I need to go watch “Bad Santa” to get my holiday buzz back.