REVIEW: It Started with a Scandal by Julie Anne Long

At one time, I was a big fan of your historical romances. I discovered you with Beauty and the Spy and eagerly awaited the publication of each book in the Holt Sisters trilogy. When you switched publishers and embarked on your Pennyroyal Green series, I kept reading, even though annoying copyediting errors began to appear in your books. I was still able to enjoy I Kissed an Earl, for example, so much so that I gave it an A- review. 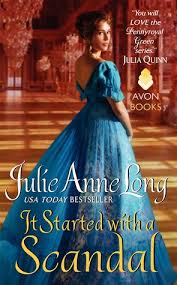 I hit a stumbling block with How the Marquess was Won, a book I didn’t enjoy much. In hindsight, I think my C/C+ grade for that book was too generous, considering the effect it had on my desire to read more of your books.

I gave A Notorious Countess Confesses a try, but put it down a chapter or two in. I purchased It Happened One Midnight and Between the Devil and Ian Eversea when they went on sale for a buck ninety nine, telling myself I would get to them eventually, but I haven’t yet.

This book. I don’t even know what to grade it, because it annoyed me so much that I ended up having to skim it. The story premise struck me as preposterous. The novel begins when Elise Fountain is forced to take a position as housekeeper for Lord Lavay, a French prince of the Bourbon family who lost his fortune and much of his family in the French Revolution and is currently convalescing in Pennyroyal Green while recovering from an attack.

You see, readers, Elise, the daughter of a doctor, was cast out of her home by her parents six years ago for having an child out of wedlock, a boy named Jack whom she loves more than anything else on this earth.

More recently, Elise lost her job as a schoolteacher at an academy for wayward girls, due to “speaking out of turn” to a student’s family member. When the party she offended threatened to reveal Jack’s existence to the parents of the other students, the schoolmistress was forced to let Elise go.

The same schoolmistress did, however, obtain for Elise a recommendation from the Redmonds, for whom Elise has never worked. And using that recommendation, Elise has gotten a crack at a position as housekeeper to Lord Lavay, who is willing to hire her on a temp-to-perm basis but doesn’t expect much.

Lavay’s servants at first seem lazy and shiftless, and one of them, Dolly, borders on sinister. Elise finds sweet gifts from them like chestnuts in her bed and a dead mouse in one of the cabinets, but she’ll face them down and endure it all for the sake of her son, Jack, whose existence she hides from her employer.

Meanwhile, Lavay is grumpy due to being in constant pain (he was set upon by six men and managed to survive their attack, but not without consequences). He desperately misses the home he had in France before the Revolution, but to buy it back and to clothe his spoiled younger sister fashionably, he must acquire money.

Two options are open to him: Risk his life for the French government for a great reward if he succeeds in the mysterious dangerous mission they have asked him to carry out, or marry an heiress. The heiress in question isn’t unappealing, but she’s not half as appealing to him as his housekeeper, Mrs. Fountain, who soothes his weary spirit with apple tarts and willow bark tea.

Years ago, I gave The Secret to Seduction a glowing “How did I love this book? Let me count the ways” review. So let me now count the problems I had with It Started with a Scandal:

First, there’s the fact that the schoolmistress of the school, despite knowing that Elise was mother to a son born out of wedlock, employed Elise as a schoolteacher at a school for wayward girls. Not only that, Jack lived in the school with Elise, yet the students and parents seemed to have no awareness of his existence. Did it not occur to the schoolmistress that if this were revealed, she could lose her business and her livelihood? Apparently not.

Second, Elise is being let go from the school for speaking out of turn to a student’s family member, yet despite the huge favor she’s already done Elise by allowing her to hide her child in the schoolhouse for six years, the schoolmistress is now willing to call in a favor from the Redmonds for Elise and ask them to recommend her to Lavay as a housekeeper. Does it not occur to the schoolmistress that this is going above and beyond for an employee, and also, that if it came out that she did such a thing, some parents might reconsider sending their daughters to her school? Apparently not.

Third, not only that, but the Redmonds, a respectable family who have no relationship to Elise, and don’t seem to know her from Adam, say yes to such a proposal. Does it not occur to them that Elise is (A) already being dismissed from one job due to rudeness, and (B) hasn’t worked as a housekeeper before, and (C) since they’ve never employed her, their recommendation is meaningless? Apparently not.

Fourth, this recommendation manages to be from the Redmonds but not from any one specific Redmond. Does it not occur to Lavay to ask Elise when he interviews her which Redmond she has worked for and in what capacity, and how that Redmond can speak knowledgeably about her skills? Apparently not.

Fifth, does it not occur to Lavay to ask Elise why she, the daughter of a well-to-do doctor, was working as a schoolteacher to begin with? Elise tells him there was a change in her circumstances. Isn’t her curious what kind of change? Doesn’t he need to know that before he hires her? Apparently not.

Sixth, there’s the fact that Lavay doesn’t realize Elise has an illegitimate son though the child lives under his very roof, and the servants are trying to get rid of Elise. Chestnuts and dead mice are all very well, but does it not occur to them that they could just tell Lavay that Elise is a fallen woman? Apparently not.

I could go on with this—for example, there’s no explanation whatsoever of how Elise supported herself and cared for her child when Jack was a newborn and she was recovering from giving birth. The whole idea of hiding a six year old from the owner of the house he lives in, who lives in the same house, seems utterly absurd. Then there’s the fact that there the forty hour week didn’t exist in the Regency era, so where does Elise find time for her son, or for singing at the pub?

But that’s only the tip of the iceberg, really, when I consider that the way Elise obtains livery for the footmen. This might be considered a spoiler, so I’ll hide it.

Lavay can’t afford matching livery, so Elise suggests that the footmen participate in a Christmas pantomime as servants to the three kings, and the livery made for their costumes be given to them.

Earlier Julie Anne Long books were also on occasion illogical or anachronistic, but I never found it as glaring as it is here. The thing that makes me really sad is that what carried me through some of those books was the writing style. Now either that has changed, or else I have, because I found the writing a lot less appealing than I have in the past.

Take for example, this excerpt:

It was so painful to laugh, because this was perhaps the first time in his life he was laughing with a woman with whom he was in perfect sympathy and whom he would like to take to bed and thoroughly exhaust with every imaginable kind of lovemaking.

And see the next morning.

And see the morning after.

It seemed they’d exhausted all there was to say.

“Are you angry?” she ventured.

It comes late in the book, so this excerpt might be considered a spoiler, but out of eight paragraphs in a row, seven are less than ten words long. I can’t help but feel insulted when I come across so many short paragraphs so close together. It makes me wonder if the author doesn’t trust me to be smart enough to handle complex sentences.

I will say this for the book – the last third did move me emotionally. It was quite affecting, and somewhat romantic, and it wrung some tears. But the rest of the book was so irritating that I had to skim to get there, so It Started with a Scandal gets a DNF.