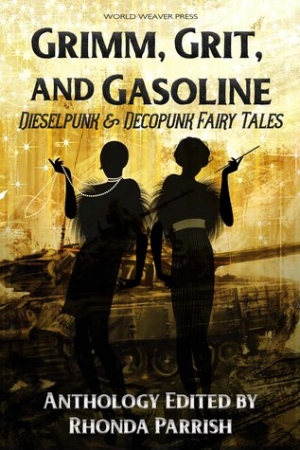 I was intrigued by the premise of this anthology – fairy and folk tale re-imaginings in a dieselpunk or decopunk setting and decided to pick up the ebook for review knowing little more than that.

As the blurb tells readers: “Dieselpunk and decopunk are alternative history re-imaginings of (roughly) the WWI and WWII eras: tales with the grit of roaring bombers and rumbling tanks, of ‘We Can Do It’ and old time gangsters, or with the glamour of flappers and Hollywood starlets, smoky jazz and speakeasies.”

The 16 stories in the anthology cover the span of alternative time from WWI to WWII, sometimes skirting (or stepping over altogether) the strict definitions of the genre and are of varying length, ranging from 3 or so pages to 30. There was a spareness to the stories I read; a lack of deep characterisation which would bother me in a novel but which I expect in a fairy tale.

If one goes into the anthology looking for something other than what I did, I think it would work a lot better but I was hoping for more romance. I didn’t end up finishing the book. I read about half of it. One story in particular kind of broke me. After that, I tried to continue but I became a little scared of what might be coming and instead I made excuse after excuse to read something else instead. After a month, I called it and admitted to myself I wasn’t going back.

I’m not saying this is a DNF in the usual sense, even though I didn’t finish. The stories aren’t bad and neither is the book. But it’s not the kind of book I want to read and I’ve got to the point where life’s too short to read what doesn’t do it for me.

I’m just going to list my thoughts on the stories I did read – I hope it gives DA readers the flavour of the book – who knows it might just be for you. Just don’t go in expecting or hoping for any kind of romance or an abundance of happy endings or you’ll be destined for disappointment.

Circles and Salt by Sara Cleto

This one is a take on the Grimm fairytale “The Girl Without Hands” (to be honest I didn’t even look up what the original story was because the title was quite enough and I know some of those original stories are extremely dark). While there is, strictly speaking, no romance in it, I’d like to think there’s the beginnings of a f/f romance happening between Elodie, a girl who has to keep constantly moving or stay still only in a chalk circle so the devil doesn’t get her and June, the girl who helps her. (Both girls have hands at the end).

A very (very!) short take on Pinnochio. It was too short to really go anywhere for me. The writing was good but I’d have liked more exposition.

The Loch by Zannier Alejandra

Inspired by Swan Lake, this was one of the longer tales in the book. I had mixed feelings about it. The “swans” are escapees from Auschwitz, having been magically transformed by a “Romani witch”. The hero is “Sig” a WWII pilot who has a talking plane called Reggie. I loved the concept of the talking plane and would have liked more about it – while Sig and his swan had a complete tale, the broader story feels untold. What happened to Reggie? Will he and Betsy be a thing? Some of the characterisations were a little off-putting, some were subversive and others never turned. In the end, the concept of this one worked better for me than the actuality. I’d really like more about Reggie though.

A retelling of The Nightingale in the speakeasy age. Something about the story put me in mind of The Greatest Showman and when I looked up the original fairy tale on Wikipedia I found out that it was apparently inspired by Jenny Lind and Hans Christian Anderson’s unrequited love for her. Jenny Lind must have been something.

To Go West by Laura VanArendonk Baugh
Based on The Monkey King. There were some similes I didn’t understand. I’m unfamiliar with the original story so that didn’t help. It didn’t feel like either dieselpunk or decopunk – to me it had the vibe of the old wild west but with supernatural creatures.

The Neugdae by Juliet Harper
Red Riding Hood set in Korea during the war. Oh god. Super violent. Did not like.

I did give it points for the villain being an American which felt unusual and perhaps even brave but I did not like the rest of the story at all and found it quite distressing. This was the story that broke me. It was far too dark for me. I’d rate myself in the average range or even a little on the low side on the “sensitivity to violence scale” in books but this one blew threw every limit in a very short page count. I guess it’s well written? It’s certainly been haunting me ever since I read it. My indelible memory of this anthology is this story, notwithstanding that it is immediately followed by a much happier story I liked very much. The more I thought about The Neugdae (and I couldn’t help but do this) the more it bothered me and the less I wanted to read on in case I struck another story of similar darkness. I feel kind of bad about not attempting the other stories. Who knows. Maybe they’re all fabulous and happy and uplifting but I just couldn’t.

The Rescue of Tresses Malone by Alena VanArendonk
Rapunzel! Fun rescue story set in the 20s with rival gangsters. No romance exactly but I have hope of what happens after the final scene. I liked this one a lot. The sense of place was very strong, the characters drawn well and the pacing was fast. The whole concept here was entertaining and interesting. This story was my favourite of all the ones I read.

Daughters of Earth and Air by Robert E. Vardeman

A take on The Little Mermaid. Bittersweet, it’s fairly faithful to the original actually but set in WWI (or possibly WWII – it wasn’t clear to me and didn’t really matter to the story either way). It’s not exactly a happy ending but it’s not entirely terrible either. Nothing fun for romance lovers however.  I knew some of these fairy tales were dark but honestly, I prefer the Disney versions.

I’m not going to grade this anthology.  I didn’t read all of it for one thing but the main issue for me is that it wasn’t what I thought it was going to be and that’s not the book’s fault. For readers who are into dark and unhappy folk tales and don’t mind reading at least some confronting violence in amongst the stories, it might be just the thing. Me? I’m heading back into my romance comfort zone where I feel safe and happy.

→ Kaetrin
Previous article: REVIEW: Battle Beyond the Dolestars by Chris McCrudden
Next Post: Open Thread for Readers for October 2019