Thanks for submitting your work to Dear Author.   I'd intended to buy this one because the cover is lovely and I was intrigued by the blurb.   Cross-dressing heroines are a favorite of mine, followed closely by nursemaid heroines, and this story has both!   Even the title, Beguiled, gives off good vibes.   Isn't there a spooky Clint Eastwood movie by that name? 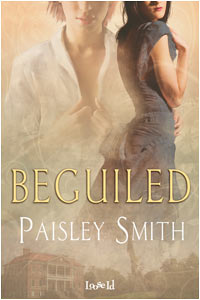 I really wanted to like this book, but I wasn't impressed by the first few pages.   I gave up shortly after, so this isn't a traditional review of the story, plot, or characterization.   It's a quick critique of the stumbling blocks I encountered.

In the opening scene, the heroine, Belle (as in Southern belle) is standing on her front porch, facing a troop of marauding Yankees.   Her little brother shoots and kills one of the soldiers from an upstairs window and Belle's father takes responsibility for the crime.   Belle is horrified:

They intended to hang my pa! This couldn't be happening.

But it was. I couldn't tear my gaze from it any more than I could have ripped my gaze from the face of a corpse at a wake. I felt as if I were somehow standing outside my body, watching instead of experiencing, observing as if it were happening to somebody else.

Like Belle, I felt removed from the action.   I think there were too many filter words like "thought" and "felt," which can create distance.   There's a great article on this at Let the Words Flow.   Belle is screaming and pleading for her father's life, but I wasn't moved because the writing style didn't draw me in.   The "telling" internal dialogue slowed the pace, giving the scene a lackluster quality.

I also noticed a lot of repetition.   In the above snippet, the word gaze is used twice in the same sentence.   Belle gazes two more times in the first three pages.   She also burns two stares, glares, gets eyed, meets each pair of eyes, and watches her father hang before her eyes.   The focus on blazing eyeballs, while common in romance, stuck out to me as excessive.

I skipped ahead a few pages to the scene in which Belle meets Alice.   The Yankees had left an unconscious soldier on Belle's doorstep.   Alice wakes up later and introduces herself as a woman.   There is no confusion, no tension, no gradual discovery of her feminine identity.

When I read about a cross-dressing heroine in m/f romance, I look forward to the hero being perplexed or in denial about his attraction to a beautiful young "man."   I picked up Beguiled with interest, wondering how this dynamic would play out between two women.   Unfortunately, the early reveal gives Belle no opportunity to interact with Alice in disguise, so the concept seemed underexplored.   DNF.

Previous article: Tuesday Midday Links: More on the pedophilia author
Next Post: REVIEW: Whatever You Like by Maureen Smith