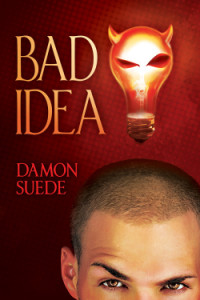 This is my first DNF review here, and it’s going to be kind of an odd one, because in some ways, I thought this book was terrific… I  just got to a point where I realized there were still a hundred pages left and died a little inside. The thought of pressing the turn button one more time was so repellent, it seemed better to leave this as a “Not for me, maybe for you” DNF review than to force myself to finish and wind up giving it a D or an F from sheer hatred.

Bad Idea is a full immersion story — we’re plunged right into action, a large cast of characters, and several complicated lives. Comic book artist Trip is helping out “his bestest fruit flies” by being cameraman for a huge Zombies vs. Humans chase across Central Park. He finds himself cruising a hot zombie with meaty forearms and bright hazel eyes, who turns out to be a special effects make-up artist named Silas. After some issues finding each other again, the two begin a tentative relationship.

As a huge participant in gay and geek culture, Silas is kind of a challenge to Trip, who’s a little afraid of both his gay self and his geek self. Trip is also a challenge to Silas, who has a love ’em and leave ’em reputation, and is uncertain about how to be the kind of “gentleman” who can make a real relationship work. Being with Silas gets a creative spark going in Trip, who starts to create a new comic featuring a strangely familiar sex demon — but leaving his safe, uninspired niche in mainstream comics to come out with a “very graphic novel” is a terrifying step for him.

Bad Idea is filled with verve. I was bummed when I recently read a book set in several exciting places, which gave no sense of those places — not a problem here: we’re in New York, and we’re really in New York. And all kinds of creative energy is buzzing. I loved reading about Trip’s artistic process, which ties into a recurring theme — particularly pertinent coming in a romance novel — about quality in popular culture. It’s not expressed in terms an outsider to the culture would use, but in terms of what comes from the deepest parts of the artist; what’s phoney vs. what’s genuine. Trip hates the whitebread “Archie comic”-ish work he does for money:

He rolled his eyes and cashed the checks, secretly certain Swamp Thing and Deadpool were somehow more real.

Could one imaginary world be more imaginary that another? How do you measure reality?

As his friend Rita tells him, “You gotta stop thinking that what you love is some kinda race you can win.”

I also really enjoyed Silas, a beefy charmer who’s a rare romance hero that struggles with his weight. Trip nevously expects him to be very dominant, because of his size; in fact he much prefers a more submissive role, which works out well for them.

Trip, with his psychosomatic allergies, doormat relationship with his user boss, and general “twitchiness” about his sexuality, is less likable; I confess, I wondered what Silas saw in him and started to get pretty tired of his issues. That was only one of the problems I had with Bad Idea.

Have you ever read a nonfiction book with a section of genuine transcribed dialogue? I’m always fascinated by how incoherent they are. Two people will be having a conversation they both seemingly understand, but they often don’t complete their sentences or ideas, and they don’t even notice — body language, or shared knowledge, or pattern completion will fill in what’s missing. It’s nothing like the orderly language we expect from a book. Reading Bad Idea was like that for me. It didn’t help that the ARC I was reading was badly formatted, but I switched to a clean copy and still found myself feeling lost. At first the sheer energy of the writing made that okay, but as more and more of the book seemed to be about side characters having lengthy baffling conversations, my boredom started to grow. Every conversation seemed to go for pages longer than it needed to; even the sex scenes started to drag.

That, combined with my frustration with Trip, eventually brought me to the “I just can’t go on” point. I may be missing something wonderful, and I’ll probably make another attempt later. But for right now, just letting it go seems like a really good idea. DNF