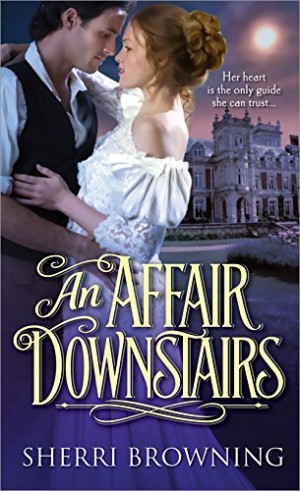 I chose this book for review entirely because of the Edwardian setting, without ever looking at the blurb. Maybe I should have looked at it first. Let’s start with that:

Lady Alice Emerson is entirely unsatisfied with the endless stream of boring suitors her family finds appropriate. She wants something more. Something daring. Something real. Each tiresome new suitor only serves to further inflame Lady Alice’s combustible attraction to Thornbrook Park’s rugged, manly estate manager, Logan Winthrop. Despite Logan’s stubborn attempts to avoid her, Lady Alice is irresistible, and so is the forbidden desire exploding between them…

That doesn’t sound too bad. Unfortunately, I found Lady Alice far from irresistible, and she ruined this book for me.

It did have a great opening before things went downhill: Lady Alice Emerson knew exactly what she wanted, and it wasn’t a husband. She had a whole list of things she longed to accomplish in life, all on her own with no one to hold her back or tie her down.

Along with less realistic goals such as captaining a pirate ship, Alice also wants to corner a fox in a hunt, get drunk on whisky, and have a wild affair. Towards accomplishing that last item, she sets her sights on Logan Winthrop, who is indeed the estate manager at Thornbrook Park, home to her older sister Sophia and Sophia’s husband, the Earl of Averford. Alice’s goal is to avoid unwanted suitors until she comes into an inheritance, and she figures that Logan is the perfect candidate for her to have an affair with, since he’s hot and won’t aspire to marry her.

Alice is twenty-two, a decade younger than Logan. I can live with that, but she’s a very young twenty-two, and thinks and acts like a teenager – making the experience rather like reading an old skool romance with a large age gap between the heroine and hero. That there might be repercussions for a servant caught dallying with a young unmarried lady does not seem to enter her mind. That Logan might choose to keep his distance is inconceivable to her, and so she thinks nothing of imposing on his time and personal space.

At the beginning of the story, a number of lemon trees are being sent to Thornbrook Park from Italy, and Lord and Lady Averford decide to invite Lord Averford’s old schoolmate, the widowed Marquess of Brumley, as a houseguest and to help with situating the trees. Lord Averford merely seeks the advice of his old schoolmate due to Brumley’s interest in horticulture, but Sophia sees him as a potential husband for Alice, even though the two are spectacularly ill-suited.

I am not sure why both Lord Brumley and Logan were needed to see to four lemon trees (only two of which survive the journey) rather than the gardeners, but I’ll accept it. Alice wants to discourage the smitten Brumley from proposing and to encourage Logan’s interest in her, so she claims to have some experience with citrus trees (which she does not) and also seeks Logan’s help in doing other things that would make her less appealing to Brumley, such as learning to shoot in order to join a fox hunt. So what if Logan doesn’t want her to show up at his cottage early in the morning, uninvited, for a lesson? Alice is irresistible! She also almost faints in his bedroom, supposedly due to wearing too many clothes. Logan gives in and she bickers with him while he gives her a shooting lesson, despite the fact that she knows nothing about shooting and he’s taking time to do something that’s hardly his job. She’s also displeased that he doesn’t declare his love for her while doing so, and prefers not to attend the ball her sister and brother in law are holding.

Logan has A Past. He is the younger son of a baron but is estranged from his family after some sort of affair with a woman who eventually chose another. What actually happened isn’t revealed until later on. He’s not annoying, but his role was mostly to think about Alice, how appealing Alice is, and why he would be no good for her. Given that Logan is an adult, with some experience in life, I just could not find the attraction believable.

Also among the cast of characters is Alice’s Aunt Agatha, who does card and aura readings and believes in ghosts (human and feline) and poltergeists – she’s a standard issue wacky romance relative. There’s also Lord Ralston; Alice cultivates him as a useful suitor at first, but he proves to be more persistent than she wishes.

This describes the first third or so of the book, and I spent much of it hoping that Alice would go off to ride a camel or climb a mountain (both are among her life goals) or just go away in general. Rather than lively and unconventional, I found her to be  inconsiderate and immature. If she had been portrayed as such, I might have been tempted to read the whole thing and see how her character is developed. But I felt like I was supposed to be charmed by Alice, and I wasn’t. I got a bit further before deciding that this just wasn’t the book for me.

The writing for the most part was fine, and there was some fun banter between some of the characters, but also dialogue tags that state the obvious and too much eye rolling and crying for my tastes. There were some references to the events of the first book in the series, Thornbrook Park, though not too many, and I gather that several characters feature in both books. The heroine of the Thornbrook Park, Eve, came across as interesting and mature, and maybe it would have been a better choice for me. An Affair Downstairs, however, is a DNF.

→ Rose
Previous article: Romance is not a feminist genre – and that’s okay
Next Post: Daily Deals: Old wives, new ones, and a girl in the making