REVIEW: A Heart of Blood and Ashes by Milla Vane

Disclaimer: A Heart of Blood and Ashes is dedicated in part to DA contributor and site owner, Jane, who read the manuscript and provided feedback on it. I have no personal relationship to the author myself. – Janine

In the past I’ve had mixed luck with the books you wrote under the name Meljean Brook. Demon Angel was a DNF for me, but I liked the first three books in your Iron Seas series much better. My curiosity was piqued by your new barbarian fantasy romance series written under the name Milla Vane and I requested an ARC of the first novel in the series, A Heart of Blood and Ashes. Unfortunately, the book did not work for me. At 60% in, I’m calling it a DNF. 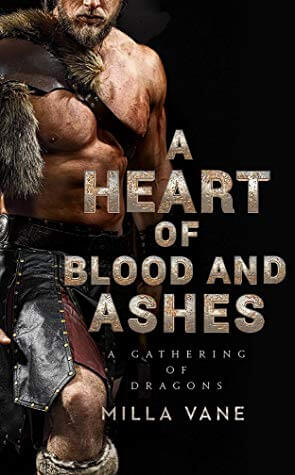 The plot concerns a journey and a proposed alliance / marriage between two people from opposing kingdoms. Maddek of Parsathe is a leader of a contingent of barbarians and son to the King and Queen of Parsathe. As the book opens, Maddek receives news of the death of his parents, and he soon learns that they were killed by Zhalen, the regent king of Syssia, while in Syssia to assess a potential bride for him as Parsathean tradition dictates.

Together with three other realms, Syssia and Parsathe comprise an alliance against a powerful and evil enemy known as Anumith the Destroyer. The alliance council has accepted testimony that Maddek’s father assaulted a Syssian woman and his mother killed one of the Syssian princes. Zhalen’s executions of Maddek’s parents in retribution for these acts were therefore deemed legal. Maddek is certain these are only Zhalen’s pretexts and he burns with the desire to avenge his parents.

The alliance council forbids Maddek to take revenge. The Destroyer is about to make a comeback and the alliance can’t fracture if the five kingdoms are to defend themselves. But Maddek refuses to accept the council’s ruling and when he learns that his parents were lured to Syssia by a letter from a Syssian princess proposing a marriage between herself and Maddek, he is determined to avenge himself not just on Zhalen and his sons, but also on Zhalen’s daughter, Princess Yvenne.

Maddek learns that Yvenne is on her way to marry the king of Toleh. He and a group of his closest fellow soldiers intercept Yvenne and her brother’s retinue. But when Yvenne kills her brother, an accomplice to the murders of Maddek’s parents, Maddek’s desire for vengeance on her cools very slightly—just long enough to allow Yvenne to state her innocence and propose their marriage.

Syssia is a matriarchal kingdom. Zhalen hid Yvenne’s existence so as not to be deposed, locking Yvenne and her mother in a tower. Yvenne is only newly released in order to be married to the malleable king of Toleh. But in Syssia succession is matrilineal. If Yvenne marries Maddek and produces a child, she and Maddek can lay claim to the Syssian throne and take everything Zhalen values. It would be a crueler revenge than his death.

Maddek considers the idea and it stays his hand. He doesn’t commit to the marriage, though, because he mistrusts Yvenne. She was the one whose letter lured his late parents to Syssia, however much she claims that she didn’t mean them harm. And when Yvenne tells Maddek that his mother wanted a marriage between them, he doesn’t believe her. Yvenne is small and physically weak, and his parents sought a warrior queen for him.

But though he thinks she’s lying, Maddek believes in Yvenne’s enmity toward her father. And he recognizes that if she is telling the truth, marrying her and producing an heir would be the best revenge possible. Maddek decides to bring Yvenne with him back to Parsathe but he is unwilling to listen to any more lies. He threatens to cut out Yvenne’s tongue if she says anything more about his mother.

As Maddek, Yvenne, and his six closest warrior friends travel together, Maddek feels attracted to Yvenne. Yvenne has a quick mind and a strong will, and as she is exposed to the world outside her tower for the first time, she develops strength and wins the respect of Maddek’s compatriots.

Because she’s a virgin, Maddek and Yvenne can’t have intercourse until the next full moon. To do otherwise would be to risk the wrath of Vela, the moon goddess. But they find other ways to satisfy their growing hungers. Yvenne also advises Maddek on how to be more than a warrior, how to become a future king. Maddek comes to like and respect her, but his distrust of her stands in their way.

As mentioned before, I quit this book at 60%. A big part of my disinclination to read further has to do with this fantasy world. The worldbuilding is detailed and therefore stronger than that of many fantasy romances, but it’s also confusing. The location of the various kingdoms relative to one another befuddled me. Having a map would have helped.

The world was also off-putting. I think I’m just not into the barbarian thing. Occasionally the male characters wear only loincloths. Both the main and supporting characters eat giant millipedes, snakes, and on one occasion, raw lizards. Both the internal monologues and the dialogue are written in a style I came to think of as “barbarian speak” that didn’t work for me. For example:

Before even three seasons had passed, however, the alliance council bade Maddek to return to the river with a message for Iova—the Rugusian king was dead—and resume command while that realm’s affairs were sorted. Iova was to have returned when all was settled. Yet despite the passing of a winter, she had not.

“What life would it be when every breath is of air that Zhalen still breathes? As a son, I cannot let their murders go unavenged. I cannot be part of an alliance that will turn their gaze from truth and say that justice has been done.”

“I will be your queen, warrior. And I look forward to the full moon, when the blood and wetness upon your cock are not my brother’s but mine, after you have thrust your sword into my virgin sheath and spilled your seed. For when that seed takes root, we will have the vengeance we both desire.”

As you can see from the last example, the book is earthy. The degree of earthiness was crude at times, but other readers might like it better than I did.

Additionally, mentions of Yvenne’s “moon night,” the anticipated loss of her virginity, are an ongoing refrain. Much of the times they touch, flirt or banter, Yvenne’s “moon night” comes up. I suspect that the preoccupation with it was intended to whet the reader’s appetite, but it made the characters seem like gossipy middle schoolers. When I searched for “moon night” on my kindle I came up with 33 instances. The frequent drumbeat got annoying after a while.

Although Maddek was handsome, physically strong and a pretty good leader to the warriors who traveled with him, I had an active dislike of him. At times he seemed obtuse, both in the way he missed some leadership opportunities that Yvenne had to point out to him and in the way he clung to his misconceptions about her.

Also, on their very first meeting, Maddek demanded that Yvenne (who has no sexual experience whatsoever and was locked in tower for most of her life) bring him to orgasm. He expected her to refuse (she didn’t) but nevertheless, it read like an attempt to degrade her. That Yvenne was turned on didn’t make it any less of a turn-off for me.

Then there is his unwillingness to hear out Yvenne where his mother is concerned. Maddek takes this to an unpleasant, even abusive degree.

At one point, just after they have been intimate, Yvenne opens up to Maddek about something her own mother told her. Maddek thinks she is speaking of his mother, not hers, and he sticks his hand in her mouth, grabs her tongue and yanks it as if to tear it out, hurting Yvenne.

Yvenne was a more appealing character than Maddek, with an insightful mind and strategic thinking. She didn’t complain even when the journey became arduous despite her limited strength. She bantered with Maddek and his warriors. These were all admirable qualities but she too annoyed me, largely because she started to develop feelings for Maddek long before he began to treat her with affection. She was smarter and more perceptive than Maddek but her budding love for him undermined that. Since I felt Maddek was no prize, it was hard to respect her judgement.

At the 60% mark, I realized that I cared more about the external plot that had to do with the politics between the kingdoms and about Yvenne’s history with Maddek’s mother than about Yvenne and Maddek’s romance. I ran out of patience with Maddek’s mistrust and didn’t much care about his fate. I liked Yvenne better, but not enough to keep reading.

My favorite characters were the six people in Maddek’s entourage (aka his “dragon”), even though it was hard to remember who of them was who. Their camaraderie and easy rapport were some of the best things about the book.

Another thing that worked well was the atmosphere of the woody terrain through which the group travels, or of the tavern where they stop for a night. These places are well-described and effectively spooky or haunting at times. The unfamiliar life forms that populate the world aren’t that easy to visualize, but the settings themselves are an adroit blend of the familiar and the new.

Still, what I read of the book rubbed me the wrong way. Other reviewers have liked it much better; I’ve seen multiple A grades for it. I think a big part of the issue here is that the barbarian world isn’t one that I find romantic. A Heart of Blood and Ashes simply wasn’t for me. DNF.