I was lured into buying your book by positive reader comments and a $1.00 off coupon from Borders. I really have to work on the whole willpower thing. You see, I haven’t really been happy with you since you began transporting your characters from Texas to the Ton. I suppose in an effort to gain new readers or a larger market share or whatever. Since you’ve left your roots of writing, I haven’t enjoyed your books. They seem full of TSTL heroines. (I particularly thought Lydia in Love With a Scandalous Lord needed a good bitch slapping, but ALAD), cardboard heroes, and hackneyed plots. I can forgive the hackneyed plots but not the one dimensional characters. Romance is, after all, a character driven story. 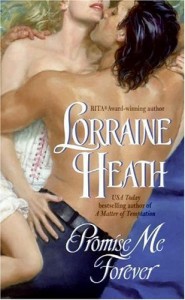 So what was I thinking when I bought your book? In my defense, it was late. You had a good theme: childhood friends who grow up to be lovers. I had worked 15 hours and wanted to just go home with a good book. Yours was not it.

I made it up until about 60 when I threw the book at my DH and asked him to toss it on the ground and stomp on it. The huge problem of your story was that it promised something in the blurb that you did not deliver. You promised me that Tom and Lauren were childhood friends who had made a pact with one another. What did this pact consist of? A 16 year old Tom trying twice to unbutton Lauren’s shirt and failing because of the intercession of Lauren’s mother. That’s it. After that second encounter, lasting all of what – 30 seconds? Lauren and her family move to England never to see Tom again until he shows up as the long lost Earl of Sachse.

And isn’t it incredible that all these titled Englishman are lost in the same small town in Texas? Incredible is right. Incredibly stupid. Incredibly impossible. Incredibly unimaginative.

But let’s return to the childhood friendship which consisted of two brief encounters when pervert Tom wants to defile young Lauren. Cause that is sexy and hot. Based upon these events, Tom just cannot forget Lauren and has come to England to see her and have her make good on disrobing for him. WTF? You expect me to buy into that? Nuh uh.

I did skip to the end where I saw another wonderful plot device:

The society miss, crazed with jealousy, attempts to kill the herione. Tom refuses to leave her side. Sob. How wonderful. Wow. I would have never guessed that one.DNF.