Two things converged at once to induce me to buy and read this book. First, there was an emailed recommendation from someone I knew who said that this was the best Johnston book in a long time. I confess I can’t remember reading a Johnston book but I’m all for ‘Best in a long time” recommendations. Then Ridley suggested she would like to see more Western historical reviews. I felt like the world was calling for me to read this book even though I had to buy it at $7.99. After weeks of buying books at sub $5, buying a book at $7.99 that ends up being terrible makes you all sorts of cranky. Bear that in mind as you read this review. As an aside, I did think of returning the book but figured that we did have a dearth of Western historical romances on the blog. 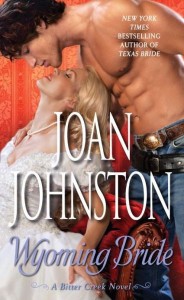 The story opens with Hannah, an orphan, contemplating whether she made the right choice in marrying stranger Mr. McMurtry. He wasn’t the gorgeous man in the white hat that she had dreamed of and she dreaded the marriage bed.  However, Mr. McMurtry was a kind man and willing to take in Hannah’s two siblings.

Despite this, Hannah thinks unkind thoughts about Mr. McMurtry, particularly that his skinny physical form isn’t pleasing, and I chide myself to be patient. Not everyone can play the role of pragmatic heroine. There is room in the genre for others. I swallow and move on. Mr. McMurtry is a really decent man and I was almost excited to think I was going to read a romance about this kind mercantile owner who was going to become the man of Hannah’s dreams. Alas, no that is not the book.

Instead, Mr. McMurtry dies from cholera he contracted from the sickbeds of infected people he had tried to comfort. McMurtry and Hannah and the two girls were kicked off the wagon train after Hannah’s twin pits two men against each other in hopes of winning the affections of one. The two men end up killing each other in a fight. These girls really are a prize.

Hannah and her sisters are separated after their lone wagon gets attacked by a band of horsemen described as “clearly not white men.” Oh, yes, the sole appearance of Native Americans as marauders of innocent white women. Later in the book, they are referred to as “savages”.

“He thought Ashley Patton might be responsible. That he gave guns to the Indians so they could attack the smaller spreads.”

“It makes a crazy sort of sense. Patton’s enough of a greenhorn to think he can control a bunch of savages.”

It’s not like the marauders being Native American were integral to the plot. They could have been a band of white outlaws and the story wouldn’t have changed at all.  Back in the 1980s, this was de riguer but in 2013 one would have thought we could discard that tired and racist trope.  I guess not.

The book shifts to the Creed brothers, Flint and Ransom, who play the heroes roles in this book. Flint is in love with his brother’s soon to be wife, Emaline. He felt like he was better than his brother and that he had saved his brother multiple times only to lose the woman of his dreams to his brother. He leaves their engagement party and vows to marry the first woman he sees which would be the heroine who is lying in a ditch somewhere after the wagon train attack (which she can’t remember). He asks her to marry him and she, being orphaned, widowed, pregnant, says “we’ll see. Depends on whether you are a good man or not.” (This is my summary of several lines of dialogue)

But secretly she is a bit thrilled because he is so hot and her previous husband was not. (I haven’t forgotten that Mr. McMurtry was a saint but apparently Hannah has). Hannah also doesn’t reveal that she is pregnant.  Hannah and Flint’s romance is not sufficient for this book.  Instead, we also get the romance of Ransom and Emaline.  Emaline reveals that she does not expect them to have intercourse because she is afraid of childbirth.  Ransom is shocked and dismayed.  However, Emaline proposes that they spend a month living together at his two room ranch house where he lives with Flint and that they sleep together and she’ll show him how wonderful sex free life can be.

The four of them will live in a house together while Ransom and Flint try to woo their wives. Ransom and Emaline will sleep together and Flint and Hannah will as well (because the sofa is too hard for Flint).  The characters’ ages in this book are young.  Hannah, for example, is seventeen, but I expected the way that they acted to be more mature. Instead, I felt like I was reading a high school version of the Old West.  At one point, Flint goes horseback riding and tells his horse how fine Hannah’s pink nipples are.

The set ups are obvious and so are the resolutions. Helena comes to figure out that Flint is in love with Emaline and he doesn’t appreciate having another man’s babe foisted upon him.  He looks longingly in Emaline’s direction but also is constantly comparing her disfavorably with Helena.  Emaline finds it harder to resist Ransom in bed than she originally thought.  There is danger presented to both couples in the form of a local rancher who believes that one of the two women would be better suited as his bride.

There is a distinct disconnect between what the text tells us and then what the characters want the readers to believe.  For instance, Flint is confronted with his two women – the one he has asked to marry him and the one he believes he loves.

Flint did a quick comparison of the two of them. One was immaculately turned out, her shiny brown hair tucked neatly into a bun, her dress buttoned to her throat and her wrists, falling all the way to the tips of her black, high-button shoes without a wrinkle.

The other wore scuffed brown shoes that had likely walked a thousand miles, a pair of Ransom’s Levi’s with ragged ends where she’d trimmed the legs to fit her, and one of his own plaid wool shirts that hung nearly to her knees. She’d gathered her blond curls into a single braid that hung down her back, but wisps had escaped to frame her face in a golden halo.

Flint felt the pulse throb in his neck and realized it wasn’t Emaline who was causing the frantic beat of his heart. It was the waif he’d rescued.

Maybe that was it. Maybe it was the fact that he’d found Hannah, like a lost penny, that made her so attractive to him. Maybe it was the mystery surrounding her during the days before her memory had returned. Maybe it was the desperation he’d felt to find a woman— any woman— so he wouldn’t be alone in the house when Emaline and Ransom returned to live here as a married couple.

Of course, none of those reasons explained why he was still attracted to Hannah when Emaline was standing in the same room with her. Standing right beside her, in fact, where the two women couldn’t have been more different than a wolf and a dog.

One was feral, one domesticated. What did it say about him that he preferred the wild one?

The “wolf” was the one clothed in the high button dress with her hair done up in a bun and the “dog” was the one wearing the jeans and men’s clothing. Pardon me for being totally baffled by this entire passage but it’s this type of writing throughout the book.

I felt these characters had the maturity of teenagers, not those who lived in a harsh land eking out survival and their own empire. Hannah is throwing herself at Flint one minute and then sobbing the next. His touches and caresses are arousing because he is young and virile whereas Mr. McMurtry was skinny and unattractive.

A woman’s fear of pregnancy and death could be very real, but it came off as so obvious and heavy handed in this book. There was so much telling and “as you know bob’s” throughout, that the entire narrative felt fake and forced.  There was no nuance in this book. Every time there was a conflict, I felt like a hand was being reached out from the book and slapping me across the face.  “Are you paying attention? She’s afraid of child birth. Slap slap slap.”

This book, like the cover, represents old school romance. If you enjoyed the westerns of the 1980s, then this might appeal. D