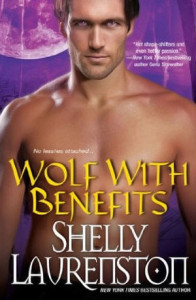 Your trademark humor and lively set up was evident in this story but the overwhelming cast of characters and slow development made this book a chore for me to read.

Toni Jean-Louis Parker is a jackal shifter born into a family of prodigies. Her mother is a world famous violinist. Every other member of her family has some musical or art related skill whether it is an instrument or dancing or sculpting or painting. Toni’s gift is that she is a problem solver. She can deftly manage who gets to practice when and in what room. She balances their schedules, makes sure they eat, and basically keeps these intense individuals from killing each other. But Toni’s devotion to her family means she has no life.

Her father is portrayed as weak and her mother devoted only to her music. Toni is both mother and father to the ten other jackal shifting siblings in her family. The little twins, Zia and Zoe, had not manifested their gifts yet. Denny, at age five, was a painter. 7 year old Freddy liked to light things on fire when he wasn’t studying science. 9 year old Troy excelled in Math. 11 year old Kyle was a sculptor. 15 year old Oriana was into ballet. 20 year old Cherise was a cellist that suffered from agoraphobia. 24 year old Cooper was a pianist. Delilah is good at everything but was also apparently a budding serial killer or something. I could never tell. She didn’t feel pain, looked at the world detached, and the only thing that kept her from cutting her sister’s eye out with a knife was having to explain it to Toni later.

Delilah held her sister a little longer. Not to make her point clear but because she was really struggling with her desire to cut her sister’s eyes out of her head. But she knew if she did that . . . she’d have to deal with Toni. Delilah hated dealing with An- tonella. So cutting up her younger—and prettier—sister would have to wait.

Enter her aunt Irene Conridge Van Holtz (friend of Dee-Ann’s and also Ric’s aunt – are we getting the confused family tree picture?). Irene sees that Toni’s future will wasted on her family unless Toni can be forced outside the home. She arranges an interview with the Carnivores, the NY based shifter hockey team, which Toni aces by making sure their star player, Bo Novikov, gets to see his girlfriend and a new player who is afraid of fling gets on a plane to go to a hockey camp in Alaska.

Toni is going to turn this opportunity down but her father and Aunt Isobel won’t let her. So off Toni goes to travel with the team and with her comes Ricky Lee Reed (who has two brothers, Rory Lee and Reece) and lives with their extended family, a wolf shifter. Why Ricky Lee attaches himself to Toni is a mystery for the entire book. He lives across the street from the house that her family rents for the summer. He watches shenanigans go on in the house for a day or so and somehow immediately decides she is interesting.

It’s almost a mistake to read this as a romance. It’s more the strange and funny tales of Toni and the insane people she has to manage while Ricky Lee provides bodyguard services.

I’ve read most of the shifter stories in this series, but I felt like Wolf With Benefits was testing me at each stage. I needed a pull out guide or handbook. There are over twenty other characters that get scenes in this book and sly references to their past made me pause in my reading.

There are two main issues in the book: Delilah’s growing sociopathic, megalomaniac tendencies, and conflicts between the Russian bear shifters.

There is no way that someone who hasn’t read Laurentson could start with this book. I think even those who are long time readers would have trouble with it although someone on goodreads did say that this is the ultimate fan book and maybe that is it. This was written for the hardcore fans. There just wasn’t much of a story here. The tone is funny. There are funny moments but there was no arc, either to the characters personally or to the romance. It’s a filler book, a bridge book between one set of Pack/Pride/Clan stories to something else. D

→ Jane
Previous article: REVIEW: Moonset by Scott Tracey
Next Post: Tuesday News: Scott Turow given platform at NYT to get his hate on and Amazon insider writes ebook about Amazon