REVIEW: What Happens in Scotland by Jennifer McQuiston

My problem with this book is that it took until Chapter 16, or 46%, for the main couple to actually meet. The preceding pages were all spent with the two trying to discover what exactly happened the night before ala The Hangover. 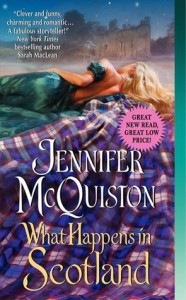 Georgette Thorold wakes up naked, hungover, and next to an equally naked bearded Scotsman. She throws a chamberpot at his head and runs off. James McKenzie has zero recollection of the night before, but he does know that the wench he slept with took his money bag and possibly his horse. His money bag contains his entire life savings which was going toward setting up a law practice in London instead of the small Scottish town where he currently resides, Moraig.

Georgette’s evil husband up and died and left her a merry and wealthy widow. After two years of mourning, she is ready to enjoy her independence. She accepted a male cousin’s invitation to visit him in Scotland but upon arriving finds herself esconsed in her cousin’s very small abode and without proper companionship (there is no mention why this wealthy viscountess is traveling without a maid or proper companion).

The last thing she wants is a husband but she finds herself possibly married to a man whom she doesn’t recognize or know the name of. It’s one hijinks after another from random people showing up and giving her animals and a prostitute bathing in her bathtub and declaring herself Georgette’s new maid.

James wakes up and endures one injury after the other. First the coshing in the head with the chamberpot, then a kick in the shins from an ill tempered horse and then a stab wound.

It’s supposed to be funny and parts of it slightly are, but most of the time I kept wondering where the romance was. I think we were supposed to get to know the characters as they circled around each other in the small town of Moraig but alas, I just wanted the two get together.

Full of misunderstandings, when the two finally do meet, the two treat each other poorly. When the two work out some of the details of the previous night, passion takes over once again. I was bewildered by the romance and frankly even the lust. The on page chemistry is forced. Georgette appears like she’d rather suck lemons than even kiss a man. And I have a hard time believing that James, who spent the whole day convinced that Georgette is a conniving thief, really is attracted to Georgette.

Most of the book takes place over a period of 24 hours. If the reader likes manic romances filled with a frenetic pace set in Scotland, this might be the right book for her.

The second half tries to turn more serious to deal with James issues with his father, the Earl, and Georgette’s past bad experiences with her now dead husband. But the big reveal bout James’ dealings with his father was kind of let down based upon stupid misunderstandings and Georgette’s emotional issues seem overcome with a few kisses.

James has it right when he tells his father that Georgette is “practically a stranger.” They both are. This is the beginning of a story not the end, particularly when James looks upon Georgette with such deep suspicion just hours before the end of the book. At the end, one character whispers to the other “We’ve known each other more than a day now. It seems much longer, doesn’t it?” No, not really. While there are 300 pages describing the twenty four hours, the romance felt like they had barely known each other for hours.

The closing dialogue included “It is very nice to meet you, Mrs. MacKenzie” and it was a fitting ending to the story because these two don’t know each other. D