I’ve been hearing good things about this series and I particularly enjoy reading about women in the military. The technical side of this story seems very accurate, but the characters and romance came off quite dry. 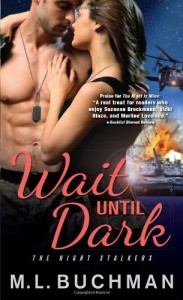 The entire story has a muted tone, despite the crew being in combat and being faced with suspense stateside. While the details all seem realistic, the story lacks emotional connection. Both characters come off as overly analytic despite only one of them supposedly being that character type.

Connie Davis grew up with an emotionless father and has turned herself into an emotionless adult, at least on the outside. She is a flight engineer working as part of the Black Hawk helicopter crew piloted by Major Emily Beale. The crew chief, Big John Wallace, is by turns amazed and a little taken aback by Connie’s almost machine like ability to identify and solve problems.

Despite the reader being told that Connie is a machine, one minute she goes from stone faced to next where she is thumping her chest and telling Big John how she doesn’t want to feel because it hurts too much. Her emotional release is melodramatic and doesn’t fit the character described for 70 pages previous.

The emotional outburst is followed by sexual advance. I wanted more mental preparation for both the meltdown and the sexual interaction. Because there was none, it felt like the book was following was a tip sheet that said by a third of the way through the book there needs to be sexy thoughts and sexy physical contact.  It wasn’t sexy.  Both I and the characters were uncomfortable.

It’s hard to say exactly what the plot of this book was. Connie and Big John are involved in a secret test flight mission and they explore their feelings outside the base.  There is a half hearted suspense thread tacked on to the last third of the story.  The scenes are episodic without any real connection between one section and another.

At times I felt like I was reading a fictionalized version of the field manual. There were scenes that didn’t move the story forward in any fashion, just to provide an opportunity to include more detail SOAR (Special Operations Aviation Regiment) training.

Then there were scenes that strained my credulity. The president arrives to review testing and equipment. He is apparently a childhood friend of one Major Beale. She calls him Sneaker Boy. Connie butts in during a conversation and offers an unsolicited opinion contrary to what position the president is espousing.  All the build up and atmosphere is thrown away over this. And for what? Connie is no thoughtless hot head. Her father trained her to be a military machine. I was cringing during the president scenes. I didn’t think it was amusing or creative.

President Mathews toyed with the last of his tres leches cake for a moment. “I wanted to see what you keep telling me about my lack of understan— ”

“Cut the bull, Sneaker Boy. This is me you’re talking to.”

John leaned in to whisper in Connie’s ear, “Friends back when they were growing up. Wonder if they fought so much back then.”

“You have no idea.” Major Beale apparently had very sharp hearing. “Every conversation with Peter is a mental jungle like you can never imagine. And now that some fools made him President, it’s even more deeply ingrained than when he was just the older pain- in- the- ass boy next door.”

I just…I can’t see anyone, even a childhood friend, expressing such disrespect of individuals in authority when the military is so hung up on chain of command. Whatever belief I had in the authenticity of the story cratered here and never returned, no matter how many acronyms were used following.  That Connie would interrupt or directly contradict or challenge the Commander in Chief seemed ludicrous and the use of Sneaker Boy was unfortunate and childish.

For a suspense this book lacked any action until the last third and even then it was rather plodding. If a reader is interested in knowing more about SOAR or Black Hawk helicopters then this might be interesting but the romance and emotional draw were lacking.  D