REVIEW: Virgin on Her Wedding Night by Lynne Graham 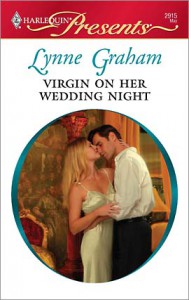 I can’t say I ever understood the motivations of the characters in this story. Five years after being jilted, literally at the altar, Valente Lorenzatto is putting the final touches on his revenge against Caroline Bailey nee Hales. Five years ago Valente was a lorrie truck driver for Hales Trucking and now he has purchased the ailing company and will provide a future for it if the now widowed Carline Bailey will be his mistress.

Caroline became engaged to Valente five years ago, professed to marry him, left him at the altar and married the son of a family friend. Her marriage was miserable, so miserable that her cruel husband never once availed himself of marital privileges, preferring to turn to more bosomy blonde women. INORITE? The contortions exercised to present a virginal woman in this book is incredible.

Caroline, rejected by her cruel husband and verbally abused by him for several years until his death, is scared of being touched. She just doesn’t believe she can be a mistress. She can be mercenary (but of course is not presented as such). She somehow convinces Valente that he must marry her if he wants to sleep with her. So marry her he does because what better way to exact revenge upon the woman who jilted you, has lost all worldly possessions but to marry her? ?????

Valente, for all his professed eagerness to exact revenge, doesn’t try to humiliate Caroline but instead marries her, makes every attempt to understand her fear of the bedroom (she acts like she has been physically abused), and generally treats her pretty well.

Ameobas probably have more spine than Caroline although her pulling off the marriage was pretty breathtaking in light of Valente’s purported feelings of anger and hurt.

I barely managed to drag myself through the book but Caroline’s helpless act was intriguing. How far would she take it, I would ask myself and how much further would Valente allow himself to be taken in and humiliated. Pretty darn far. I guess from that standpoint, there is a certain genius in the story. D