I have to preface this review with a little backstory about my love for your books. I’ve loved most everything you have written from your early category days (McKenzie’s Mountain, the Kell Sabin Series) to your hardcovers like Open Season. I’ve defended Marc Chastain and his Guiness Book of World Records erection in Kill and Tell

against Sarah who says that any man that can hold it up that long must suffer from priapism. I’ve defended Dain in Dream Man

against Robin who says that he is more deranged than the serial killer. Dain was just trying to struggle against being in love and catching the bad guy. Poor Dain (and cripes that book scared the bejeesus out of me. Sometimes I still root around in my closet to make sure no one is hiding there). 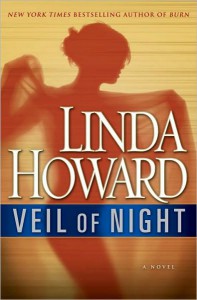 I trot out my past reading credentials not just to show off my Howard pride but to provide some context for this review. Suffice to say that my disappointment comes from a well of deep love. When I started Veil of Night, I sent an email to a friend of mine “I’m reading the latest Howard book and it is pretty good.” I get farther into the first two chapters and I email her again “It’s classic Howard. Cop hero. Wedding planner heroine.” My next email was the following day and it was “I ended up hating the Howard book. Asshole hero. Mean heroine. The ending was laughably bad.” It was a trifecta of horrible.

Jaclyn Wilde is a wedding planner in business with her mother. They are steel covered in silk and linen and no wedding is too difficult for them to pull off. Working out of a swishy Atlanta suburb, Jaclyn is currently working on the high society wedding of Carrie Edwards and the son of a Georgia politician. The father of the groom is rumored to be the next U.S. Senator from Georgia. Carrie, however, is a Bridezilla and everyone from the caterer to the cake decorator would like for Carrie to go away. And one day, someone acts on that impulse and shoves a bunch of skewers into Carrie, killing her.

Unfortunately for Jaclyn, she was seen having a huge argument culminating with a physical altercation with Carrie right before Carrie was kebobbed to death. The investigating detective turns out to be Eric Wilder. The complication is that Jaclyn and Eric up for the first time just the night before. Instead of bowing out of the investigation, Eric takes charge and pursues Jaclyn as a suspect hard, in order to not be accused of any bias. In his head, Eric justifies this because he doesn’t believe Jaclyn is guilty and him heading a hard charging investigation will just clear her faster. Of course, Eric does not share this information with Jaclyn. Jaclyn believes herself to be a suspect in a murder investigation and despite being a super savvy business woman doesn’t think to engage herself a defense attorney. She’s also quite hurt that Eric is not only heading the investigation but believes her to be a murderer.

Eric eventually gets information that clears Jaclyn but decides to keep it to himself for a few more days despite seeing how emotionally traumatized Jaclyn is being a murder suspect because he realizes he needs a little more time with her to back into her bed. Eric, he’s all heart. Eric was a real ass. He acknowledges Jaclyn’s business is very important to her but he constantly shows up at her wedding events, sometimes interrogating her in the parking lot and sometimes pretending to be her boyfriend. Either way it screamed unprofessional because who wants their wedding planner either a) as a suspected murderer or b) as someone who brings her date to her job?

Thoughts about the groom: Not like he was about to run, but still. .. nervous. If he had any brains at all, she thought, he’d rabbit. Evidently he was brainless.

Thoughts about mother of the bride: Next, the bride’s mother was seated, to a Garth Brooks tune of her own choosing. Her dress was at least one size too small, and way too short. Spaghetti straps weren’t what Jaclyn would have chosen for the occasion.

Thoughts about the kids: The baby wasn’t happy. One of her cousins, a sullen six-year-old boy, pulled the wagon, jerking it along.

Thoughts about the guests: Fun didn't have to be color-coordinated. Fun didn't have to have a background of classical music. But what kept her from relaxing was the strong impression that this group's idea of fun didn't fit within the definition of "legal." She frequently handled guests, and wedding party participants, who drank too much or breathed through a joint, but she was afraid this group leaned more toward crack, meth, and a variety of crimes that made the words "warrant for arrest” of importance to them.

The only wedding that Jaclyn thought was wonderful was her last event and that was a wedding in which “money was no object”. The families were all wealthy and “the bride’s mother was from one of the prominent families in Georgia, which upped the social awareness of the event a hundred times over.” and “Even the flower girl and ring-bearer were both adorable, and both were well behaved.”

The juxtaposition between this wedding and the hillbilly wedding made Jaclyn’s thoughts all the more discordant. Obviously the better class of people and the more money, the more “perfect” the wedding. The problem was that I thought you meant to write the scene to show that all types of weddings could be fun by Jaclyn never made the connection in her own mind thus it was impossible to see any character growth.

There is a lot of internal exposition. Like we are treated to a three paragraph dissertation on why Jaclyn drives a Jaguar. Allow me to say it for you. She drives one because it is important to keep up appearances that the business is doing well. This particular entry is emblematic of the entire book. We get paragraph upon paragraph of ridiculous exposition but almost none on the attraction between Jaclyn and Eric. We are treated to four or five pages of villain exposition of the villianous scheme to get rid of Jaclyn but sadly, while this “how to get rid of annoying loose ends in one’s evil scheme handbook” is detailed it’s also about the dumbest plan ever.

[spoiler]The plan is that the villain will wait outside Jaclyn’s last wedding, near an empty parking lot and then will follow Jaclyn’s car, separate Jaclyn’s car from her cop boyfriend’s car, then shoot Jaclyn while both are driving and then dispose of car and gun and run away for a while. WAT? [/spoiler]

Finally, while there were some weak attempts at obfuscating the villain, the whodunit was obvious from the minute the dead girl showed up. The best part of the book was the police procedure. Maybe I am not into weddings but the details of the weddings I found to be excruciatingly boring. Boring details, unlikeable characters with no obvious chemistry, endless exposition, and really dumb ending force me to give this book a D. Thank the Lord I didn’t have to pay for this book.